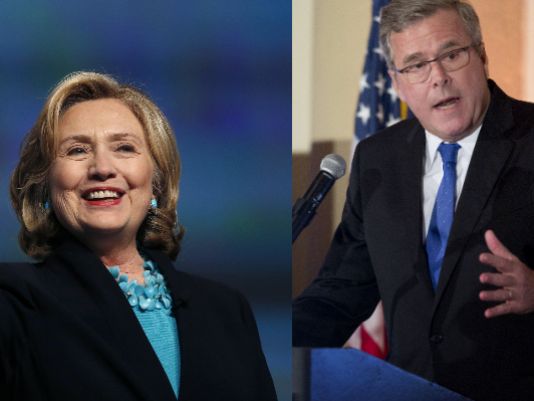 In a preview of what is surely to become a recurring theme among other GOP presidential hopefuls, Brent Bozell’s ForAmerica organization is blasting Jeb Bush as a candidate certain to lose [read_more]if nominated.

In a Washington Post interview, Bozell made no bones about his and others’ plans to ensure Republicans nominate anyone but Jeb Bush.

The conservative advocacy group ForAmerica released an online advertisement this week calling Bush “unelectable.” The group’s president, L. Brent Bozell, and other figures on the right say they are attempting to formulate a plan for toppling Bush, possibly by rallying behind one of his opponents.

“If Jeb Bush is nominated, Hillary Clinton is elected. There is no doubt in my mind about that,” Bozell said in an interview Wednesday. “Republicans can’t win without a conservative base that is inspired.”

The above-reference “advertisement” is actually a couple of web videos attacking Bush for the apparent collegiality between Jeb Bush and Hillary Clinton, in contrast to the sharply critical tones used by other Republican presidential hopefuls.

I’m not sure this is a punch that hits its mark squarely. Sure, lots of people have a gag reflex when they see Clintons and Bushes being chummy, but there are a lot more people that aren’t turned off by two people being able to disagree agreeably (though it does call into question Jeb’s ability to forcibly criticize Hillary on things like Benghazi and the rest of her stint as Secretary of State).

But…the mere fact that Bushes and Clintons are famous for getting along in their roles as ex-Presidential families does underscore the fundamental weakness of the latest Bush’s electability. Although being a part of a political dynasty is a plus for things like fundraising and organization, on balance it’s a negative among ordinary voters. Nominating Jeb Bush would take away the built-in advantage Republicans would have in a fight against Hillary Clinton. Stated more crudely, when faced with a choice between a retread and a fresh new face, the new face has an advantage, but in a match-up between two retreads, it’s a wash.

And that’s without even considering policy stances. Bozell nails it when he says that the Republican candidate can’t win without an energized conservative base, which is something Jeb Bush would be unlikely to have behind him in any case.

I like and immensely respect the Bush family for their decades of leadership and service to the Republican Party. I genuinely do. But Jeb just isn’t someone who can win, at least not this time around.

Thankfully, we have a wide field of viable, conservative alternatives who can.

The Republican Party has about 16 candidates who have indicated that they may run for President in 2016. Fast Track could be one of the best ways to determine which ones possess economic understanding. So far Jeb Bush, Marco Rubio, and Ted Cruz have come out in favor of fast-tracking America’s economic destruction.

Frankly, I find Jeb Bush’s open opposition to many conservative positions regarding immigration (open borders as an act of love), Common Core ( federalized education) and often his stumbling, more or less tepid support for other conservative issues not in the least disqualifying. Conservatives need to grow up and conduct their efforts like reasoning adults. Jeb Bush is open and generally clear in his policy statements, there is little to no equivocation or pretense regarding the ideas he supports. He is in fact rather refreshing compared to the pitiful group of so called Republican dissemblers and outright liars that spent the better part of 2014 falsely stating directly in the face of the American electorate their impassioned opposition to Obamacare, immigration policy and deficit spending only to gain a majority status position and immediately abandon every commitment pledged not 30 days in the legislative door.
These are the true enemies of conservatism, these are the individuals to focus our ire upon NOT the Republican that disagrees with our positions but does so in an open and straight forward manner. DON’T be manipulated by so called fellow conservatives who desire to tell you who is worthy of listening to or is “electable”. This is a false and pernicious path populated by far too many charlatans in cash based organizations. I don’t support Jeb Bush’s possible candidacy or many of his positions but I respect his right to openly express his ideas which I believe will not stand in the face of solid conservative alternatives clearly articulated. Let’s focus on what is wrong with the Republican Party and it is not Jeb Bush but the dishonest professional incumbency class whose only deity is power and who we willingly re-elected in 2014.

I hope that we don’t get in the habit of disqualifying Republicans before they have had a chance to put forth their proposals. Having said that, I would prefer a fresh face to articulate our message, enthuse the party, and draw in young people. Marco Rubio comes to mind.

Oh, My mistake, maybe: I originally read it as “ineducable”.
Given Hillary’s clay feet (turning to mud) seems that all we need is ANY Va Republican Creed Compliant republican with a prospective cabinet on the campaign team. No one should have to try being everything to every body.