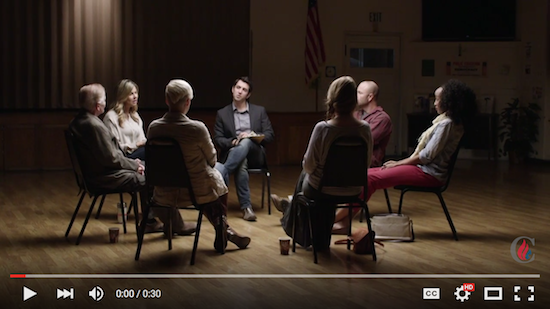 The latest ad from Ted Cruz is a creative send up of the 12-step support group.  It’s called “Conservatives Anonymous,” and is aimed squarely at Marco Rubio, and more broadly at conservative lawmakers who allegedly campaign one way, and then vote another.  Check it out.  It’s pretty clever.

UPDATED: As you can see, the ad was pulled. Here’s what FoxNews.com reports:

The Texas senator’s campaign confirmed late Thursday that it had pulled a commercial hitting Florida Sen. Marco Rubio over illegal immigration because one of the actresses had previously appeared in pornographic films.

What’s interesting about this is that it’s still not aiming at Trump, but instead appears to be trying to make Cruz the designated Trump-stopper among the mainstream Republican voters who make up the majority of primary contests in the next three weeks.

That’s a strategy that concedes Trump can’t be diminished by negative advertising, but instead must be beaten by delegate counts alone (i.e., a winnowed field that then unites against Trump). We saw this taking shape among the more “establishment” candidates in New Hampshire. Look for it to play out in spades in South Carolina and in the March 1 primaries.