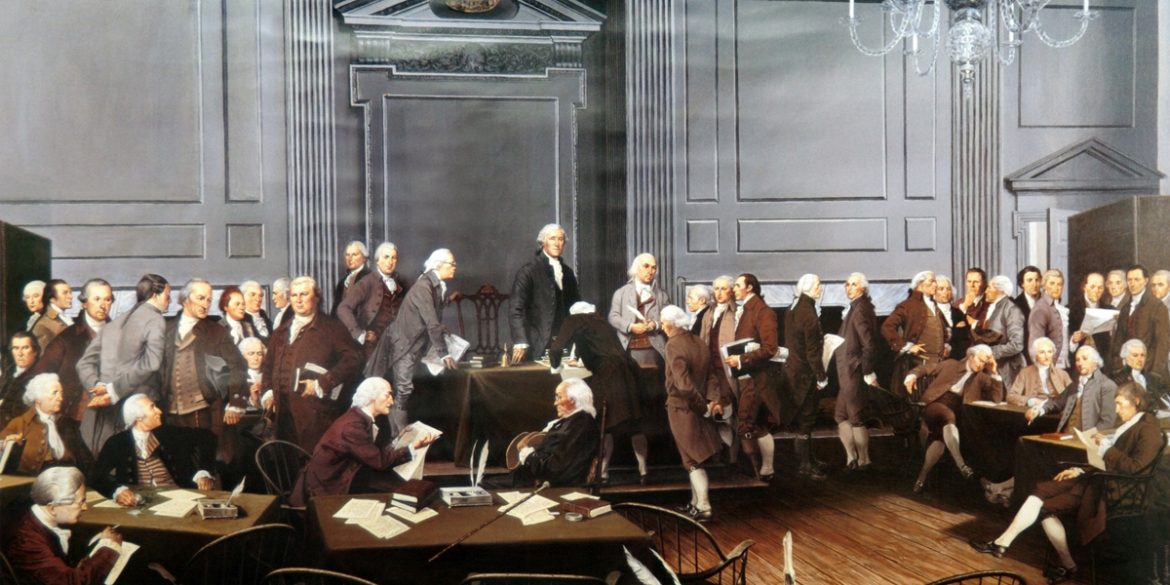 
“They intend to take down individual liberty and replace it with their illusion of collectivist equality.”

Somewhere around my sophomore year in high school, sandwiched between thinking about fast cars and cute girls, I thought I ought to know what the great thinkers and philosophers of history had to say about it all.

I began with a monstrous tome the size of a bread box titled, as best I can recall, Great Philosophers of History, which I lugged to my after-school job in a motel. There, I would find time each night to spend with selections from the ancient Greeks and roll right through history; Socrates and Plato to Descartes, Rousseau, and Marx, to Locke, Montesquieu, Smith, and many others. It became a lifetime habit.

But it was the American Founding and Founders that caught not just my mind but my imagination.

To me, these men were the craftsmen, the finest artisans of history if you will. Virtually to a person, they were extraordinary minds, educated in the classics and the Enlightenment thinkers. They were skilled students of the Holy Scriptures. And they were accomplished in the practicality that building a nation in the New World required.

Above all, they were doers. They were fighters.

I became a “conservative” reading these men. They understood the intrinsic nature of man and the inevitable consequences of unchecked power. They grasped the limits of human ability, the immensity of God’s perspective, and the imperative of leaning into His wisdom. They believed Nature’s endowment of individual, human liberty was a sacred gift and a self-evident truth.

The Founders saw the world as it was, and created an ingenious method to keep the Republic from destroying either liberty or itself, while at the same time providing a process for improvement beyond their lifetimes.

The Declaration of Independence, the Constitution and the Bill of Rights, stands as their witness against the tyranny of the mob rule of parliamentary “democracy” on one end, and the oppression of the various totalitarianism’s on the other. Our Founders knew that one could be just as wicked and repressive as the other. And, they believed successive generations would see the value of the Republic and would fight to keep it.

Now, two hundred and fifty years later, the nation’s Founding is ground zero in the second civil war for America. A cold war, but a war nonetheless.

The organized hundred-year-old worldwide long march of socialism and Marxism “through the institutions” in Gramscian order, has gained functioning control of this nation’s corporate media and entertainment complex; it’s educational establishment and universities, much of the permanent administrative state, a surprising number of transnational corporations, and, of course, the Democrat Party.

This radical cabal has launched a virtually unchallenged and vicious frontal attack against the moral legitimacy of the nation’s founding, its institutions, and its faith. And they are ratcheting up the attack every single day in every venue and forum possible. They are quite open about it; they intend to take down individual liberty and replace it with their illusion of collectivist equality.

You only have to take them at their word.

While this is happening, the Republican Party as a whole seems paralyzed by a beguiling timidity and indifference that renders them virtually useless. A sizable chunk of Washington’s Republicans, many labeling themselves conservatives, openly ridicule the very idea that the “transformation” of America that was formally heralded by Barack Obama in 2008, and now championed by the herd of Democrat presidential candidates, is anything more than campaign hyperbole or pushback against President Trump.

This same group dismisses – ridicules – any suggestion that the country is in any particular trouble or immediate peril.  Frankly, they are more aggressively ruthless to those on the right who point out the well-documented record, and progress over the many decades, of the radical left.

Some of them also reject the very concept of going to political war to win the fight the Founders thought worth the sacrifice. These are pacifist conservatives; they won’t fight, not even for the “principles” they sanctimoniously preach about, and ironically, they won’t be able to practice when the nation is finally “transformed” into one of the you-know-what-holes the President so eloquently mentions.

Besides President Trump, who was the right’s last warrior, Ronald Reagan, Newt Gingrich?

To test this statement, look no further than the Republican majority (who all claim to be conservatives back in their home states) in the Senate where there are not enough Republicans to fit in a phone booth who will stand up and fight for anything other than their big donor’s favorite boondoggles. Heck, this crowd wouldn’t even defund PBS when they held majorities! (Perhaps Caligula’s horse Incitatus would really be an improvement, one thinks in exasperation.)

The Washington Republicans spend a lot of time talking and writing about “the civil society,” “bipartisanship,” the public “comity, ” and, of course, the moral imperfections of the current President. And, they’re quick to lecture others about their diamond-hard “conservative” moral and ethical principles that would never allow them to use the power of government to win a political fight.

However, they seem fine with the radical left using the power of government and the courts to re-engineer the Bill of Rights, free association, and commerce. Or to destroy the family unit. And through inaction, they don’t mind allowing a debased culture and its manifestations to be forced on precious little first and second-grade school children, robbing them of even a year or two of innocence.

The pacifist conservatives don’t mind a lot obviously, as long as it doesn’t include them having to fight. And history demonstrates that in itself is defeat.

If you are not prepared to defend the very principles that created the freest, most prosperous, and, yes, most “equal” society the world has ever known, then the vacuum that you create will be filled by barbarism and the rule of thugs.

Defending our Founding principles may very well involve actions that conservatives might not always like. However, when you read the personal letters and papers of the Founders, you realize that many of them were deeply troubled with both the compromises and the enormous personal sacrifice that was needed to create the new nation and then form the new Constitution. They wept and bled over these decisions.

Unlike the glib ignorance or willful re-engineering of history offered by most twenty-first century critics, the Founders grappled with every complex moral and social issue and in the end, did what they had to do given the context of their own time. It wasn’t always pretty, and nor will be the solutions for the multiple crises we face today.

How this might look in 2019 and 2020 could fill a book. But some of the immediate issues represent a clear and present danger to the Republic, and they won’t be solved at this point by academic papers or think-tanks. They will require brave citizens and courageous national leaders who are willing to fight with what we do have, not what we wish we had; who believe in the fight at hand.

The new battlefield of First Amendment rights is perhaps the most critical. Freedom of conscience, speech, religion, and association is now literally in the cross hairs of electrons. The freedom of ideas is under direct assault by private companies who have monopolized the information highway and are well on their way, by their own admission, to decide for the entire population what can or won’t be discussed or heard. They are self-appointed arbiters with immense power.

Are their rights as privately owned corporations more important than the Constitutional rights of the First Amendment for the average citizens? Who decides? Are conservatives willing to put the interests of the working men and women ahead of corporate interests?

In a not dissimilar fashion, major corporate banking interests and their board of directors, as well as mega transnational corporations, whose very economic viability is heavily regulated by state and federal officials, are coming under intense pressure to accommodate a worldview and cultural perspective that jives with the radical left. On the issue of guns, questions of faith, controversial aspects of human sexuality, among others, a nationally organized and well-financed movement seeks to disrupt financial services or demand regulatory reform for businesses and organizations who do not meet their approved viewpoint. (Government entities themselves, as I have reported separately, have been caught red-handed trying to do much the same thing.)

Is this an acceptable form of debate and public action? Is this how we now decide how the Bill of Rights and the rule of law is applied? Are these fundamental rights worth defending, even if it means the power of the government is employed?

On the border, we have a catastrophic invasion, and the Congress and individual federal courts have decided that the very laws already passed can’t be enforced. The clear Constitutional power of the Executive that had been accorded to all former presidents has been denied with this President. When he is forced to act, will conservatives support the law? Will they fight fire with fire? Or will they succumb to the irrational, revolutionary left?

What about sanctuary cities, or the refusal to allow Federal agents to pick up aliens who have lawful deportation orders?

The list is long. But this is a debate that needs to happen in the conservative movement before the time for debate slips away.