Barbara Comstock’s NoVA contact list received a blast email Thursday, with an invitation to a fundraiser at the home of Tim Phillips of Americans For Prosperity, featuring former California U.S. Senate and 2016 presidential candidate Carly Fiorina, for Comstock’s 2018 primary. Just one little problem. Look at the bottom of this screenshot: 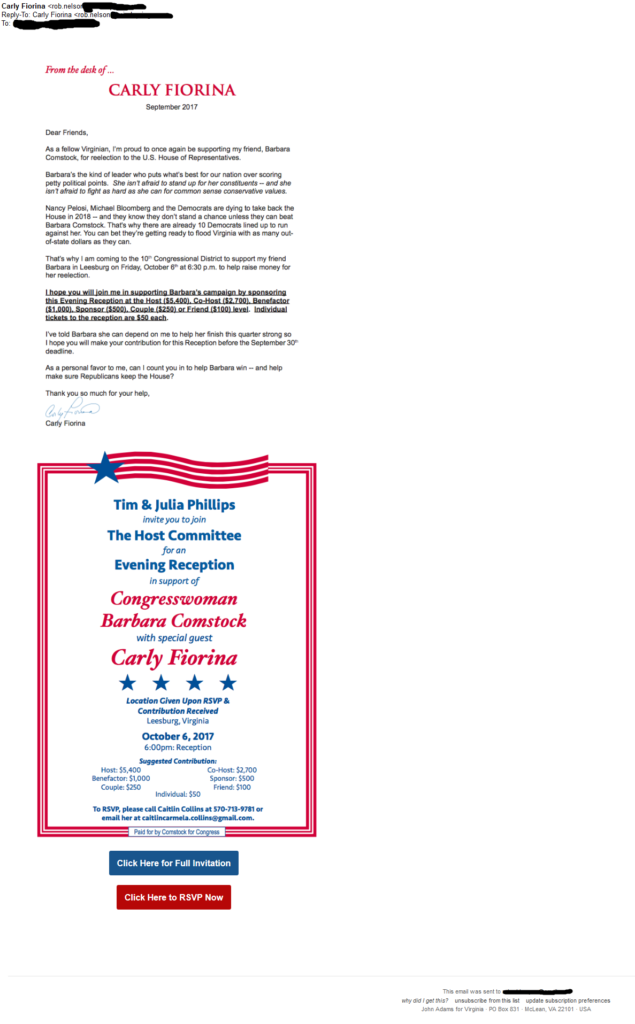 Yup, that’s right. The footer says ‘John Adams for Virginia.’ Rob Nelson, a consultant who’s gotten a fair amount of money from the Comstock campaign, listed as the sender up top, isn’t listed on Adams’ VPAP report. What gives?

Adams and his team had better get to the bottom of this, lest they lose the support of grassroots conservatives less than two months from a statewide election. He’d better extricate himself from this comstockery, and quickly.

Try as I might, I see no reference to John Adams on the screenshot. Even if it is there, my reaction is “So What? “. I make an occasional mistake. Therefore I’m willing to overlook the occasional mistake that others make.

Since I will vote for John Adams, I am pleased if Comstock has something in common with him.

Tranny Barbara’s gotta go, or switch parties. We get that her district is Nova, but enough is enough. How much further to the left are we going to be pushed?

I guess Adams is even stupider than Comstock.

I missed you,”Cat”.
Glad to see your awaited return.

I am not sure why this is big news.

So Comstock and Adams share the same fundraising vendor and he made a mistake? Why is this a story? Why go after a Republican nominee for this?

Literally the most non-story.

Have you seen the Trump Bear for sale?