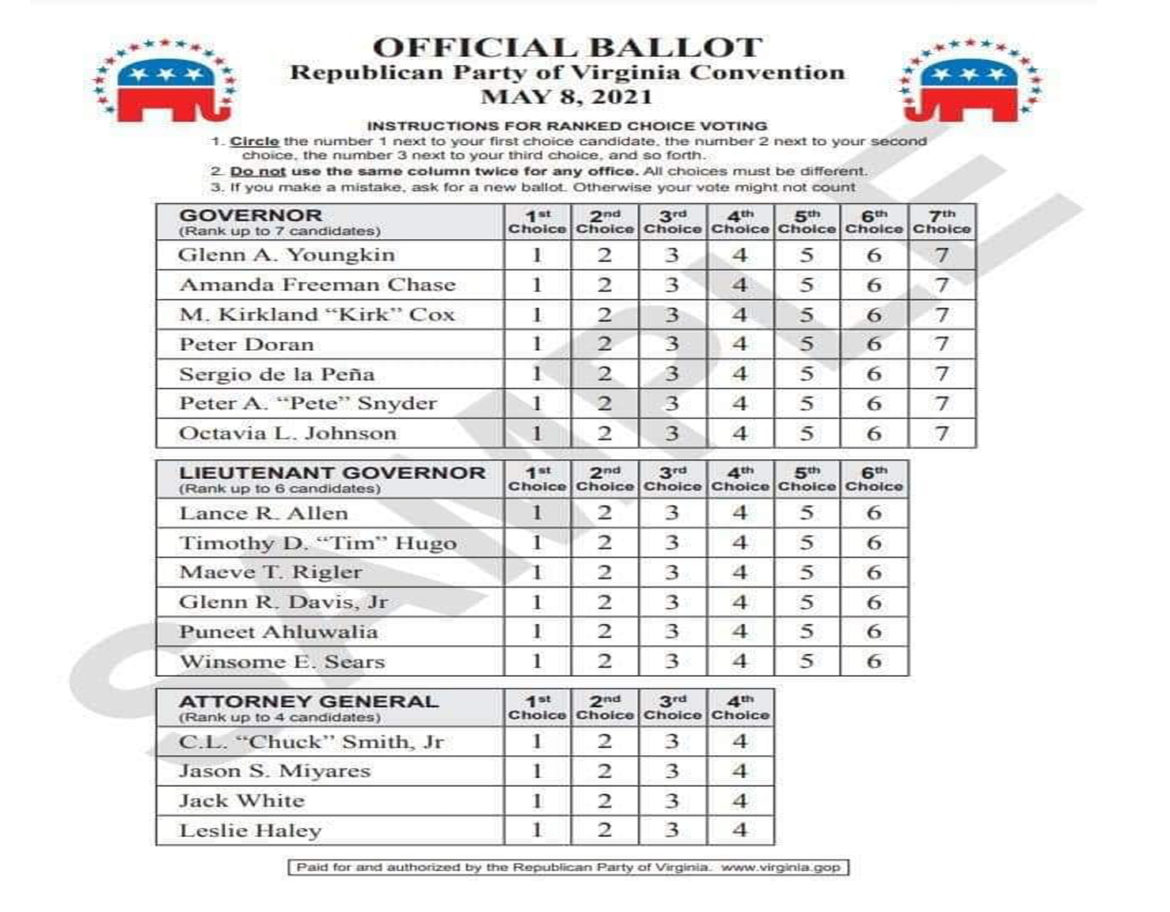 Convention details for tomorrow, May 8th, and when to expect results

The Republican unassembled convention begins tomorrow at 9:00 am and ends at 4:00 pm. If you are in line at 4:00 pm you will be permitted to vote. Find your polling location here.

Information on all the candidates can be found here.

It’s a good idea to print the sample ballot and mark your choices before leaving for the polls. Once you get your real ballot, it will make the process faster if you have already chosen your candidates and their order. Ranked-choice voting is explained here and here.

In ranked-choice voting (RCV), orÂ instant-runoff voting, systems, voters are able to rank candidates in order of preference. Initially, only first-choice rankings are counted as votes.Â  If a candidate has the majority of votes, that candidate is elected.Â  If no candidate has a majority, the candidate with the least number of votes is eliminated and the votes of everyone who ranked that candidate first are transferred to their second choices (if they ranked anyone else).Â  This process continues with the candidate with the least votes being eliminated and their votes being transferred (assuming that voters ranked additional candidates who have not already been eliminated). The counting stops once a candidate gets a majority of votes based on the number of ballots remainingâ€”and that candidate is declared the winner.

Sample ballot for Republican ballot May 8, 2021:

After all the votes are in at the local polling places, officials will reconcile their numbers and place the ballots in a secure box to be taken to the Marriott Hotel Ballroom in Richmond. It is hoped that all votes, from all 11 Congressional districts, will arrive in Richmond Saturday night or early Sunday morning.

Sixty election officials from around Virginia will be waiting to begin the vote tally at 1:00 pm on Sunday. They will first count the votes for the Attorney General. It is hoped the winner of that race will be announced by Sunday evening.

They will next tally the votes for Lt. Governor, followed by the Governor’s race. The full results are not expected to be completed until later in the week, perhaps Wednesday or Thursday.

Convention details for tomorrow, May 8th, and when to expect results was last modified: May 7th, 2021 by Jeanine Martin