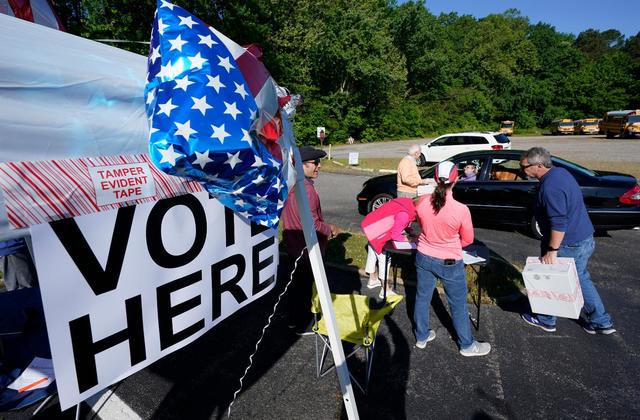 Convention was missed opportunity for Republicans to galvanize voters

Failure to have programs, attractions or “I voted” stickers at the precincts would have been phenomenal

The statewide unassembled convention May 8 seems to have gone off without much of a hitch, including the physical transport of ballots to be counted to Richmond, and the early voting on Friday for folks like myself with ”religious obligations” (No election integrity problems, from what I gather, as one TBE author wrote here in defending State Central’s awful decision originally not to allow Jews to vote early).

For the delegates from Norfolk’s Orthodox Jewish community, who finally won the ability to vote early before shabbat on the 8th, this was a real honor.  A number who did not register were envious of the 12 who did prefile.

A number of non-delegates did show up to vote and could not. That was a shame, but I and so many other party activists wanted the state primary to be used since the Democrats are tied down the same day, June 8, and can’t cross over to influence our nomination process.

However, with a convention, which is designed to grow the base, we lost an opportunity here to use the voting venues for discussions with voters after they voted, focus groups perhaps and even some speeches and some free snacks and drinks.

An estimated 29,000 of the 53,000 who prefiled voted statewide.  Given the fact Gov. Al Jolson Northam’s COVID restrictions April 1 allowed indoor gatherings  up to 50 people and 100 outdoors, there could have ben input sessions on the future of the party, training programs and speeches from non-candidates … and maybe some food or snacks as an inducement.

The Republican Party of Virginia (RPV), the 11 districts and the local units certainly got new emails and phone numbers for their data bases.  But the SCC scions looked at his from the narrow standpoint of a convention and thought only the true faithful party people would show up.  No, there were a number of new activities galvanized by the candidates, particular gubernatorial candidates Pete Snyder and Glenn Younkin who invested millions in the effort to get the nomination.

What more, the governor’s restrictions on  more than 50 individuals indoors, or 100 individuals outdoors, does not cover if they are  “assembled in an educational setting”  . Don’t and lectures count as “education” so you could have more people in a room, especially with chairs distanced?  Weather was beautiful so some of these chats could have been held outside, especially at voting venues with limited seating indoors.   Ironically,  Gov. Blackface just lifted lifting the restrictions  to allow 100 indoors effective May 15, a week after our convention.

I’ve said for a long time  that our party in Virginia is losing elections because it is not reaching out to new population votes, particularly nonwhite voters suburban voters who fled from Blue states and vote Democrat by habit.   The missed opportunity to engage the delegates in a meaningful way – even giving them a sticker reading “I was a 2021 GOP State Delegate!” would have been a nice touch.

But the Republican Party of Virginia, due to its moribund status, incapable of raising money or paying to keep its headquarters up to code (it has no working HVAC), and dependent on federal RNC money to meet payroll, did not see this convention as an opportunity to grow the base.  Despite doubling the candidate filing fees and raising $168,000 for the convention, RPV went in the hole and reportedly had to ask the Republican National Committee for more money.

By the way, RPV raised no new state money in the 1st quarter of this year, other than candidate payments to use the RPV nonprofit mailing permit

Again, the GOP’s attitude is – thanks for your vote, now move on and be sure to be back in November.

Our local unit in Norfolk is preparing to reach out to the 674 folks who registered – 384 about 56% voted – to get them involved.   A number of women delegates said they would volunteer and maybe join our revived Norfolk GOP Women’s Club.

I hope other local units will seize that opportunity not just to send more direct mail and fundraising emails – but to get these delegates engaged with our party through positive social events that will get them more involved other than voting or putting a sign on their lawns.

Convention was missed opportunity for Republicans to galvanize voters was last modified: May 10th, 2021 by Guest Contributor Ken Reid

[…] trying to persuade general election voters.  Our recent convention was a missed opportunity to bring new blood into the party […]