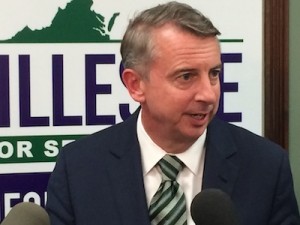 This weekend’s Republican Party of Virginia Convention in Roanoke was a smashing success for our party, both in terms of the process and the ultimate outcome.

Understandably, many supporters of Shak Hill might not regard the way things unfolded as a success for our party.  In their view, instead of their guy winning, the party nominated an “establishment” insider with key vulnerabilities in the fall.  And it is true that Ed Gillespie will face an uphill battle to unseat Mark Warner.  But in contrast to Shak Hill, Gillespie will have the resources from day one to undertake that fight, and—thanks in large part to the gracious endorsement Shak gave him—will have a mostly united party behind him.

Importantly, this was a nomination decided by the grassroots.  Ordinary Republicans heard the candidates, weighed the arguments, and came down firmly on the side of the candidate they deemed most likely to be able to advance our shared values.

A candidate cannot buy a convention.  Resources help, of course, but Shak’s solid performance is a good example of how, in contrast to a state-run open primaries, the “establishment” favorite with all the money and insider connections doesn’t automatically win in a convention.  Gillespie had to work for this victory, and he did that by interfacing directly and individually with thousands of rank-and-file Republicans.

Kudos to Gillespie for engaging in that process.  Unlike some others who are afraid of conventions, Gillespie undertook the retail-style campaigning with gusto, displaying a great deal of personal humility and respect for the grassroots along the way.  Just as importantly, kudos to Shak Hill for providing us with a meaningful choice, and for challenging Ed to make his case.  Had this been a primary, it would not have even been a contest, and Gillespie would have been our nominee without us having had any real opportunity to vet him or get to know him, much less to fully understand his strengths and vulnerabilities.

This is why we have conventions.  It is not a scheme to ensure that the most conservative firebrand wins, but is instead simply a way for ordinary party members to have a meaningful choice.  This process works.

But the real utility of a convention is what we will see over the next six years, when our next Senator will always keep in the back of his mind that he has to come back to a convention to seek re-nomination.  Back in the 1980s, when Sen. John Warner cajoled the RPV State Central Committee into giving him a primary (thus, under Virginia’s Incumbent Protection Act, allowing him to choose a primary for each successive re-nomination), Warner no longer felt accountable to the grassroots.  One manifestation of that freedom from accountability was his vote against President Reagan’s appointment of Judge Robert Bork to the Supreme Court, a move that infuriated the Republican base that was then essentially powerless to do anything about it. Likewise with Warner’s liberal votes on life and Second Amendment issues. Gillespie will give us no such infuriating votes.

Taken together with the fact that this convention was probably as close to flawless in its execution as we have seen in at least the last decade, yesterday truly was a triumph for our party.  To be sure, many of the most hard core supporters of Shak Hill will continue to be suspicious of our nominee and of those who voted for him, but we have now washed away much of the acrimony that attended the results of last year’s convention, and have taken a great step toward healing and unity.

Both sides scored a victory yesterday.  The so-called “establishment” won the contest, but the conservatives won the process, ensuring that the candidate who likely had the best shot of winning will remain accountable to the grassroots.

A ton of people helped make this year’s Convention a success.  A few people in particular, though, were absolutely key.

First District Chairman Eric Herr served this Convention as Chairman of the Credentials Committee.  In this role, he oversaw the check-in process, and also supervised the counting of the votes and tabulation of the results.  He has offered his “Convention Report Card” here.  I agree completely with Eric’s observations, but what he couldn’t say himself is that a large part of the success of the event was due directly to his leadership and hard work.  David Ray deserves special mention here as well for his devotion to a fair and efficient process.

RPV Executive Director Shaun Kenney also deserves a huge pat on the back for a job well done.  Shaun has really brought a tremendous level of competence and professionalism to this role, and at every step of the convention planning process he made all the right decisions and managed all the staff expertly.  As I’ve said elsewhere, Shaun was made for this job, and we’re lucky to have him.

As Eric mentions in his Report Card, the execution success is in large part due to the tireless dedication of RPV’s Convention Manager, Jeb Wilkinson, whose tremendous competence and decades of experience were of incalculable value.  More than anyone else on the team, Jeb deserves our thanks for making the whole thing work.  Chairman Pat Mullins also deserves a lot of credit for having the judgment and foresight to recruit Wilkinson for this role.

Finally, we should all thank Ed Gillespie and Shak Hill, and their wives and families, for all of the heart and soul they’ve poured out over the last many months in service to our shared principles.  We’d be nowhere if good people like these men didn’t make the sacrifice of time and treasure to help protect our rights, and to make America a better place.  Thanks in particular to Shak, whose class act at the end of yesterday’s Convention displayed real leadership and poise.  We owe you our gratitude and respect, sir, and hope that we have not seen the last of you.