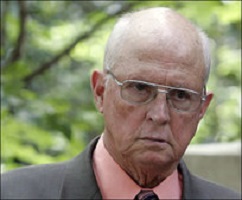 Yesterday, I discussed the severe ethical failings of Prince William County Commonwealth’s Attorney Paul Ebert who is facing a general election opponent for the first time since the 1980’s.

Today the Washington Post published a puff piece about Ebert headlining Ebert’s successes, and downplaying his failures as mere criticisms of his opponent.

Just to recap, a federal judge appointed by a Democrat, after evidentiary hearings with sworn testimony, determined that Ebert and his longtime prosecutor Rick Conway engaged in “prosecutorial misconduct,” “threatening and intimidating” and “coerc[ing]” a witness, “taint[ing]” evidence, and “obliterat[ing]” Wolfe’s “due process rights.”  The result was a death penalty conviction in which the sentence was nearly carried out.

Then comes the WashPo, who identifies Ebert as the man who put the D.C. Sniper on death row, as opposed to the man who put Justin Wolfe on death row through manipulation of the legal system.  The WashPo captured these quotes from Ebert about campaigning:

“It’s time-consuming and in some ways demeaning. I think I’ve done a good job and yet here I am,” Ebert said in an interview in his courthouse office. “It’s almost like I’m a beggar.”

He hasn’t done a good job.

It is only demeaning to ask for votes, and you only feel like a beggar if you feel entitled to your position.

Ebert, through the Wolfe prosecution and aftermath has acted above the law.  Ebert in commenting on what it is like to campaign feels it is demeaning to ask the common people for their trust.  Ebert is entitled to his position.

Arrogance, thy name is Paul Ebert.

Those of you in Prince William concerned about public safety know this, arrogance will not beget justice.

Just an additional note:  In the Washington Post article longtime prosecutor Richard Conway is threatening to leave if Mike May is elected.

Prince William prosecutors say Ebert’s defeat would be a major disruption to an office that attracts and retains top talent.

“Frankly, probably a lot of us probably wouldn’t be here either,” said Rick Conway, who has worked for Ebert for more than 25 years. “There would be a total novice coming into one of the largest offices and one of the busiest offices in the commonwealth of Virginia.”

I left Conway out of my previous article.  Since he has chosen to participate in the public debate we should delve into his role in the Wolfe case.

Conway was the prosecutor working beside Ebert in the original Wolfe trial who also engaged in the behaviors identified by federal judges above.  Conway was also one of the three who “intimidated and threatened” the witness in the secretly recorded conversation with the witness in 2012.  Here is Circuit Court Judge Thacker’s description of the “interview” of the witness on September 11, 2012:

Nonetheless, the questioning did not stop there.  Instead because this was not the answer the Commonwealth wanted, they proceeded to interrogate, intimidate, and threaten [the witness] for over an hour, but at no point did [the witness] relent.

(emphasis in the original).

Conway should feel free to leave with Ebert.

Conviction-at-all-Costs Ebert Whines About Running for Office was last modified: October 27th, 2015 by Paul A. Prados