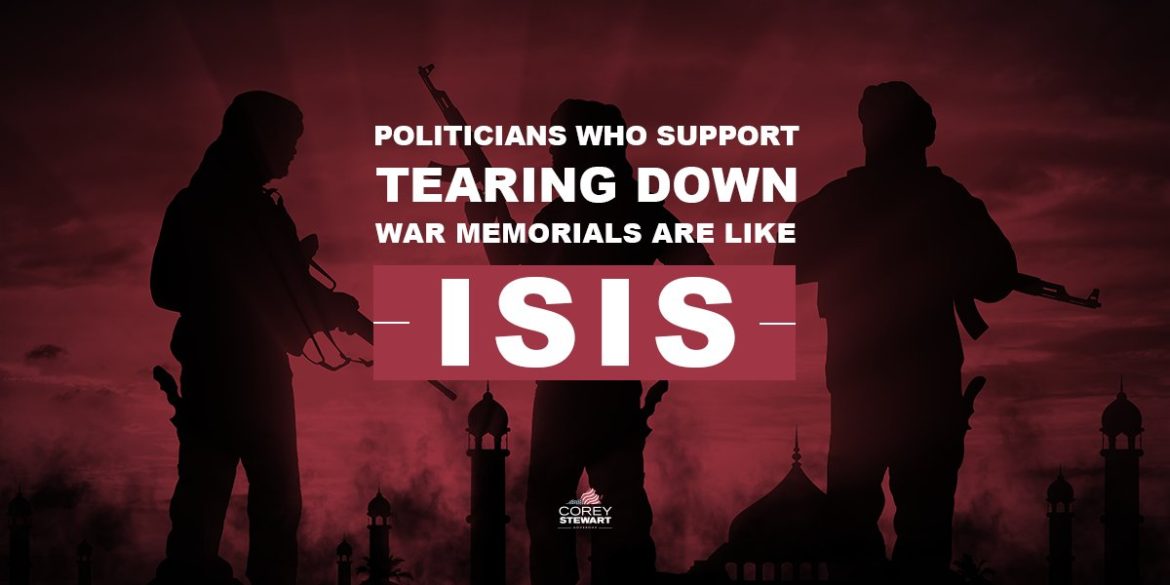 Last week was not a good week for Gubernatorial candidate Corey Stewart. He made national news getting into arguments with musician John Legend and David Simon, creatorÂ of “The Wire”. Â  From the Corey Stewart’s Twitter, April 24th:Â 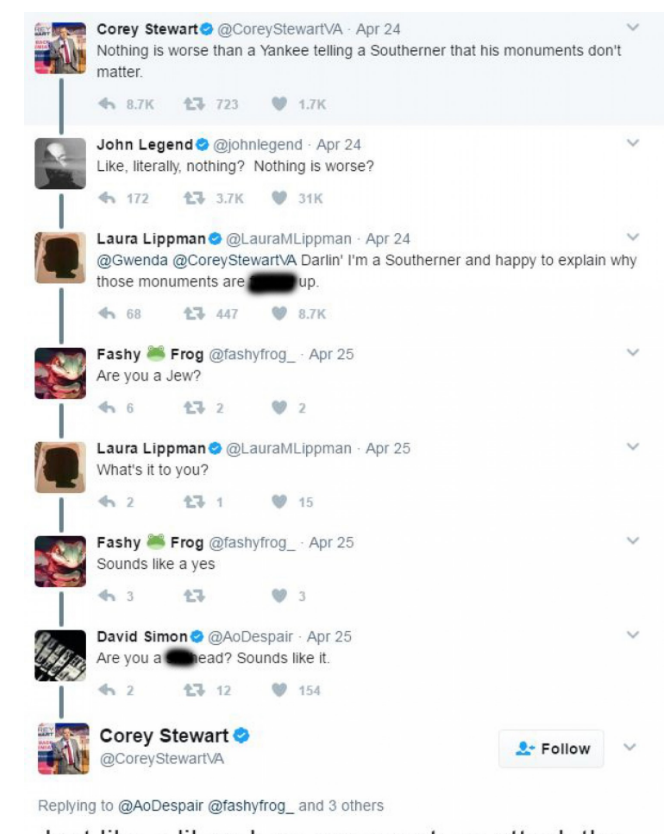 Stewart responds saying these celebrities who attack him are just like ISIS:

Corey then attacks John Legend, comparing him to Senator Joe McCarthy in the 1950’s:

Corey previously said some politicians are just like ISIS. Â Such an absurd comparison. Â How many politicians have tortured people, cut off heads, and burned people alive? Â Stewart needs to stop the ISIS comparisons. 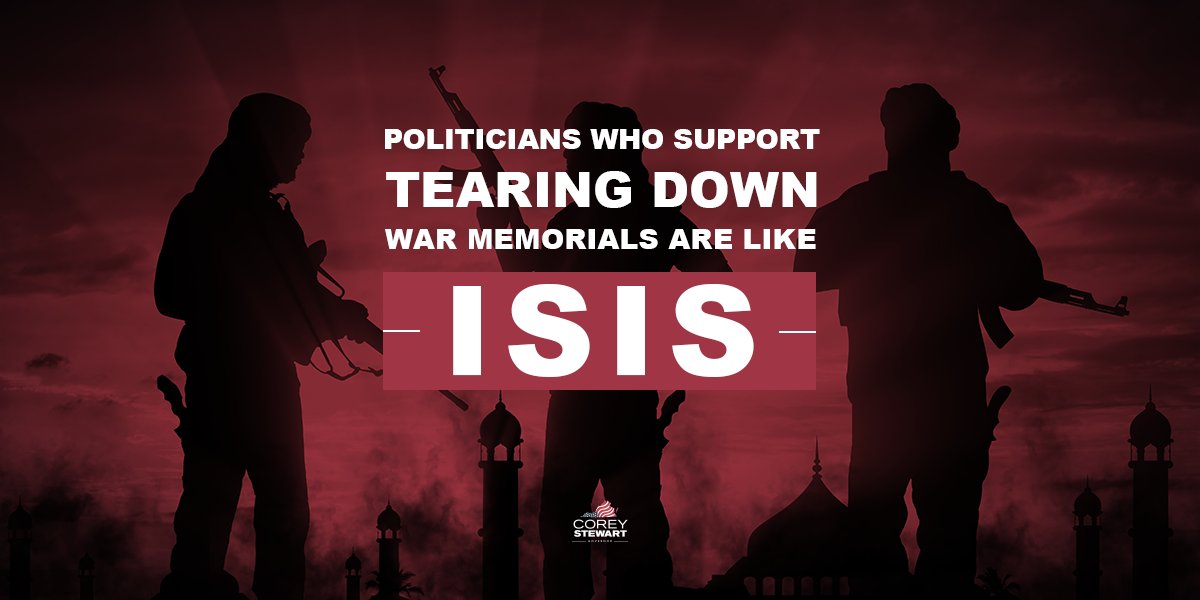 Stewart has also vowed to make the city of Charlottesville buy back their stature of Robert E. Lee if they sell it. Â It’s not clear how a Governor could do that. Â More on that story here.Â

Corey in the Duluth news hereÂ and in Law StreetÂ here.Â

Corey just can’t help himself, digs his hole deeper and deeper was last modified: May 1st, 2017 by Jeanine Martin

Who is John Legend? I really do not care. I am interested in electing a governor of my native state, not going along with some left-wing Hollywood types who do not care about us or our history.

The left’s argument that the fate of monuments of well-loved Virginians should be left up to localities is impractical. The Lee statue weighs tones, it was a gift to the city, paid for by citizens, Voting out a city council member and replacing him with another who is for the statue is like shutting the barn door after the horse has left. It would then cost hundreds of thousands to move the statue back again. What are they going to do, transport a multi-ton statue back and forth every couple of years every time the political winds change? All of Virginia’s history belongs to ALL Virginians.

Stewart is right to bring this issue to the forefront of his campaign. The man is no stranger to controversy. He has a track record of standing up for causes that many of us believe in but for which there is no leader (ie:crackdown on ILLEGAL IMMIGRANTS back in 2007 when most elected leaders were afraid to say anything).

Jeanine, I am really disappointed in you and in BE. I came to your site after finding Bearing Drift just basically void of impartially. It was biased vitriol spewed at a variety of candidates whom I supported (Ken C, Donald, & whoever else was not conventional at the time). I even remember them attacking you for something “politically incorrect” that you said, and I even defended you. Remember that incident? Buy now you are conducting this website with the same hatred.

Stewart’s stances on illegal immigration have now become a major rallying point for those of us who actually expect our laws to be enforced. We now have a Republican president elected for the large part on this issue. Stewart’s stances on Confederate monuments is coming in the middle of a growing national debate, as the City of New Orleans prepares to tear down statues that have been there for almost a century. Your blog hit pieces seem to think he is out to lunch, but there are many of us Virginians who are just fed up with having political correctness forced down our throats at every turn.

I’m a white southern New Yorker and as a military professional I very much admired Robert E Lee and Stonewall Jackson – two exemplary men. But if LOCALITIES wish to remove the statues for whatever reasons, then I think it is their right to do so. Therefore, if I were a Republican candidate for governor, I would not make this the centerpiece of my campaign, as there are much bigger fish to fry IMO.

To Stewart’s supporters, I’ll answer “Yes, and No”: There’s some semblance in removal of Civil War Memorials and ISIS’ destruction of historic sites in the Middle East, whereas both actions attempt to erase history though visual expungement. However, persons in the U.S. who find public displays of Civil War Memorials and Confederate flags unnerving aren’t filling mass graves with bodies, nor kidnapping and raping women. Now, I’m a white southerner, and despite Cory’s assertion that “Nothing is worse than a Yankee telling a Southerner that his monuments don’t matter” — and even though I agree that history should not be “erased” just because some find it inconvenient — there’s far worse things someone could tell me.

Thanks for writing yet another hit piece. It strengthens Corey’s supporters resolve and brings new voters over to him. Keep up the good work and maybe, just maybe MSNBC or CNN will give you a real job writing trash and pretending it’s news.

Glad to hear you are participating in the electoral process. Keep it up!

You don’t think Corey’s news in Virginia? Who knew?

Sure Corey is news in Virginia! Headlines read “EdBots show desperation by writing hit piece after hit piece, thus showing the world they are liberals in disguise”

Well some celebrities as welll as ploiticans are out of touch, they do not understand history and how to use it to lead with integrity.
Many elected Va. Republicans for instance. These Republicans are for the exploitation of labor. They take contributions for instance then they are complicit to the lack of enforcement of labor law.
The Va.Republican General Assembly might as well be auctioning off illegal aliens on that stump on the sidewalk in Fredericksburg.
Not one darn presently elected Va. Republican is more credible than Corey Stewart himself when they allow and oh they do allow the employment of illegal aliens in Va.
as unlicensed contractors.
So much for the cry baby claims for
e-verify on a national level when they lack verification methods in thier own State.
Yes I will say it ;
Remember Obama in Africa standing at “the door” where men , women and children were loaded on ships to be sold for exploitation.
Now today we have every elected Va. Republican standing at today’s door of exploitation in Va., Employee Misclassification and Unlicensed contracting.
SOLD!
or
SOLD OUT?

Context Jeanine. What next you’ll be quoting Springstein? Maybe Catilin can give you advice on how to destroy the heritage of a region kinda like the ISIS thugs.