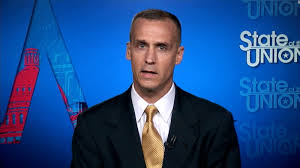 Trump’s campaign manager Corey Lewandowski has been charged with misdemeanor battery after a former Breitbart reporter, Michelle Fields, accused Lewandowski of grabbing her arm after a press conference at Trump National Golf Club in Florida. (Ms. Fields left Breitbart because she felt she the company did not support her enough).  Lewandowski turned himself in this morning to Jupiter Florida police.  He will plead not guilty.

Ms. Fields tweeted pictures of bruises on her arm which she alleges were caused by Lewandowski.  He responded,

“You are totally delusional. I never touched you. As a matter of fact, I have never even met you.”

I find myself wondering if Ms.Fields is another ‘special snowflake’ who has no experience in politics or reporting.

Maybe Trump should sue her since several Secret Service guys said they told her to quit touching Trump?

“I never touched you.”

Care to try that again?

Isn’t it amazing that anything happens to the Trump campaign ends with him getting more and more publicity? It’s rather stunning.

Agree. Apparently this reporter is heavily into drama and is a attention seeker. It is not the first time she has made these types of claims. Andrea Mitchell would always try to push her way during a Reagan press conference and every time a USSS guy would block her she would scream she was assaulted.

And the spin continues…

No Spin just the facts. Ms Fields had to be warned twice not to touch Trump. She barged through a area that was being cordoned off.I am sure that will come out in testimony.

She and Fields are both special snowflakes who can never be touched or they will cry.

Seriously, if that can bring about a charge of battery, then everyone who participates in the madness of Black Friday needs to lawyer up

We have had nearly 2000 classified emails put out on the Internet by the Democratic front runner and this is the Shullbit that TBE concerns itself?

My, my, you sound rather angry. We’re still in primary mode in the Republican party. Your milage may vary.

Well, I am not angry, just frustrated. This is much ado about nothing.

The media doesn’t seem to agree with you.

Check around the blog, we put up several posts today. Why are you so angry? I thought this post was done fairly.

I don’t get it, she barely moved at all. She certainly wasn’t thrown sideways and almost knocked over like some were describing.

Much ado about nothing IMO.

That’s why he’s only being charged with a misdemeanor. Grabbing and pulling someone’s arm hard enough to leave bruises isn’t cool, but it’s not like he kicked her teeth out or anything. Personally, I think his lying about it after the fact is worse than his manhandling her in the first place.

How do we know her bruises came from him? Is she on blood thinners or is there some other reason she bruises so easily?

In her civil suit, she’ll have to prove that through testimony. I assume that the prosecutor interviewed all the witnesses before the decision to charge.

Parents have been known to grab children when they’re about to do something dangerous (run in the road) and it doesn’t leave bruises.

Perhaps he used more force than the typical parent?

It sure didn’t look like he did. If he was that forceful, why didn’t she scream or at least yell ‘ouch’? She didn’t say anything when it happened.

Wait, there’s audible audio? I keep my computer muted. Seems to me it would be foolish to try to judge the force of his grip from that distance and angle. All that can be said for sure is that he pulled her away from Trump and that he lied when he said he never touched her.

I honestly think when Lewandowski was questioned he didn’t remember her grabbing at Trump or Lewandowski grabbing her arm to get her off of Trump and out of the way. I think that’s why he was so empathic that he had never touched her or even met her. It all happened so fast and was such a nothing incident in the eyes of those around her. As the film continues Michelle gives no indication of being in pain, she’s not yelling, or holding her arm. Those bruises may well have happened days before. The court will have decide. But since she’s done this before, her story may not be believed.

Or maybe Lewandowski is just a thug and a remorseless liar like his boss?

He absolutely has been acting like a thug… and a bullying one at that.

Enforcer seems a strange role for a campaign manager, and he clearly is careless with the truth. Maybe Trump has been a bad influence?

Campaign staff are supposed to protect the candidate and would be negligent if they didn’t.

Still seems to me a strange role for someone of his “stature,” but I’m automatically skeptical of anyone associated with Sleazy Donald.

He would have known he grabbed a woman even if he didn’t know it was Fields. Whether he remembered it or not, the correct response to this situation was not to attack, attack, attack on Twitter.

She did react like that, she was crying: https://www.ijreview.com/2016/03/557732-audio-here-is-the-altercation-between-trumps-campaign-manager-and-michelle-fields/

Quite the special snowflake. Crying? Really? Over that? Not exactly a tough woman. Glad the poor dear didn’t have to cross the prairie in a covered wagon.

At the very least Lewandowski either lied or was very careless with the truth. Shocker, I know. Lawyers should be able to make short work of this misdemeanor, as it should be.