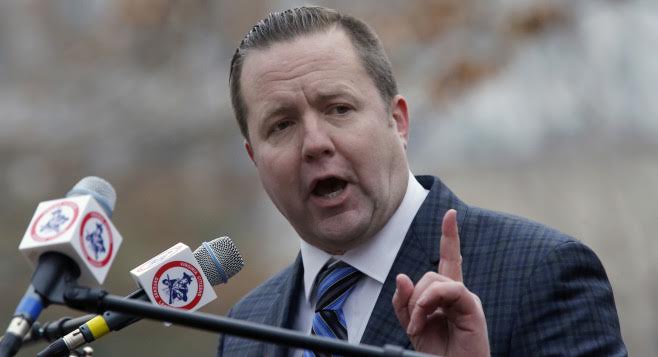 Corey Stewart, current chairman of the Prince William County Board of Supervisors and candidate for the Republican nomination for U.S. Senate, held a press conference earlier this afternoon eviscerating Ed Gillespie and leadership of the Republican Party of Virginia.

In a statement in advance of taking questions from reporters, Stewart blamed last night’s loss on Gillespie’s status as an establishment candidate just before calling on Republican Party of Virginia Chairman John Whitbeck to resign.

Stewart criticized Gillespie for not fully embracing Donald Trump (“He treated the president like he had typhoid”), and credited the greater vote totals of John Adams and Jill Vogel on those candidates’ not having rejected Trump. Stewart did not explain why Vogel’s and Adams’ position on Trump was insufficient to secure a victory.

He categorically rejected the idea that yesterday was a repudiation of Donald Trump. Instead, Stewart blamed Gillespie and Whitbeck for losses across the board, including historic losses in the House of Delegates.

Stewart also said confidently that he would be the Republican nominee for Senate.

Full video of the press conference is below.