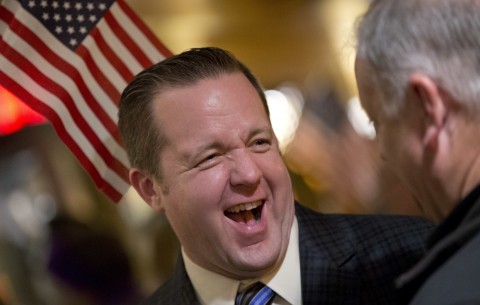 Corey Stewart didn’t beat Ed Gillespie but he came close. That seems to have buoyed him to consider a run for Senate in 2018. From InsideNova.com:

I’ve got a Hawaiian shirt on and I’m sipping on a cocktail, and I’m going to do that for the next few weeks. But at some point I’ve got to figure out what to do,” Stewart said in an interview. “But I think people are fed up with Tim Kaine.”

This guy, he’s been closely aligned with the Antifa movement, these violent protests across the country,”

Stewart told the Washington Post he believes Kaine is ‘vulnerable’.  He added,

I’ve got to take a breather and take stock,” he said in an interview with The Washington Post. “If I announced I was running for another office right now, it would be a headline in The Washington Post: ‘Stewart clobbered by Confederate wife.’”

I’m ready for a vacation,” he said, adding, as a joke, I’m going to tour Confederate sites in Minnesota. … I’m also going to lose some weight. I got fat on the campaign trail. When you’re on the campaign trail, you eat very unhealthy. You eat burgers and fries and you just gain weight. My suits don’t even fit anymore.”

Stewart has yet to formally concede to Ed Gillespie.  He has said he will vote for the Gillespie in November but will not encourage his voters to support Gillespie unless the nominee makes some changes.  He must become a ‘fighter’.  Gillespie must come out against illegal immigration, in-state tuition for illegals, and he must protect Confederate statutes. He must also embrace President Trump.

Corey needs to take on Gillespie by running as an Independent.

I have always said a winning strong Independent will come from the
Republicans and Conservatives not the Democrats .
I would fully support an Independent run, to me that is Freedom at her finest.
Delegate Lacey Putney ( I ) survived for a long time.

Running as a third party or independent would hand the election to Northam.

he’d be better than Carly Fiorina or Eric Cantor

Corey is just the guy to take on Kaine…he’s such a target rich environment giving away the Toll Rd, closing the toilets on the interstate and acting as a role model for his son’s arrest for violence at a Trump rally among other blunders.