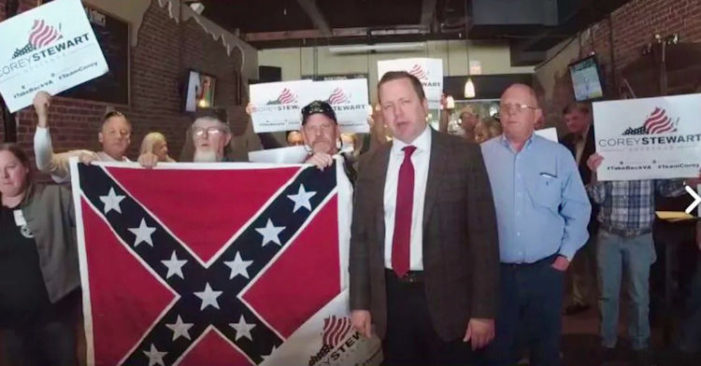 Corey Stewart and his supporters

As most of you know, we’ve got another statewide election in Virginia this year. This time for the US Senate Seat held by Hillary Clinton’s Vice-Presidential pick, Tim Kaine. Despite rumors for months of other candidates jumping in the race or skepticism that anyone could muster a strong challenge to the presumed front-runner Corey Stewart (although that label is seriously called into question after Stewart lost three major straw polls in Richmond and Northern Virginia in a row), the race for the Republican nomination has come down to Delegate Nick Freitas (R-Culpeper), Former Lt. Governor nominee E.W. Jackson, and the aforementioned Chairman of the Prince William County Board of Supervisors.

I feel compelled to write this because for too long, Corey Stewart has managed to get away with effectively lying to Virginia Republicans about his record. True to his public claims of wishing to be “ruthless” while campaigning, wishing to “tell it like it is” whether people want to hear it or not (and it just so happens, he always seems to be telling a crowd what he thinks they want to hear), and “speaking truth to power,” I will do the same here.

Stewart is a charlatan and a habitual liar. He will bring not just shame to every Virginia Republican as the GOP nominee for US Senate, but disaster to conservatives in a state that has not gone red statewide in nearly 10 years.

Having run for countless statewide offices in the past, from flirting with the idea of a Senate run in 2012, running for Lt. Governor in 2013, to running for Governor in 2017, Stewart is now engaged in his third statewide bid, and his 4th run for a different elected office in just 7 years.

At this point, Stewart is effectively just a perennial candidate who tries to find a new song to sing to voters on an almost yearly basis. I hope to shed light on his hypocritical record and rhetoric between now and June 12th. There’s so much source material to work with so let’s begin with one issue at a time.

Corey Stewart Says One Thing While Running For Office, And Does the Exact Opposite In Prince William County – Immigration

Corey Stewart bills himself as “Trump before Trump Was Cool,” and routinely touts his “tough” stance on illegal immigration. Indeed, one could argue that combating illegal immigration has been the centerpiece of his entire campaign for U.S. Senate in 2018 (alongside support for President Trump, the man who fired him after he threw the Trump campaign in Virginia under the bus just days before the 2016 election). Stewart’s own website states the following about illegal immigration:

“In Prince William County, Corey led the nation’s toughest crackdown on illegal immigration – resulting in over 7,500 criminal illegal aliens being turned over for deportation.”

“Corey will fight illegal immigration, amnesty, and ban sanctuary cities as boldly as he did in Prince William County. Every illegal immigrant arrested should be deported – no questions asked. Stewart will work side-by-side with the Trump Administration to make that happen. As U.S. Senator, Corey Stewart will oppose any form of amnesty, and he won’t back down to establishment pressure.”

The only problem is Corey Stewart has done the exact opposite of his U.S. Senate platform as Chairman of the Prince William Board of Supervisors.

After Prince William implemented a series of new provisions designed to protect its citizens from illegal immigration in 2007, roughly 5,000 illegal aliens moved out of Prince William County. Almost immediately after he took over the office of Chairman, Stewart led the fight to weaken the county’s immigration law. Since Stewart’s takeover of the county, illegal immigrants have come flooding back into Prince William en masse. MS-13 is running rampant across the county with 14 murders in the county linked to the growing gang in 2016 and the first months of 2017.

Stewart claims that “Every illegal immigrant arrested should be deported – no questions asked.” But how on God’s Green Earth does that compare with the fact that he voted to abolish a key part of Prince William’s illegal-immigration policy that directed county police to question criminal suspects about their immigration status after they have been arrested?

Not only did Stewart vote to end Prince William’s policy of checking the immigration status of those arrested, he caved to an Obama-administration directive to further gut the county’s immigration laws in 2009.

You can’t make this stuff up ladies and gentlemen. Corey Stewart, who has built his entire campaign around “tough talk,” “not backing down,” and “telling it like it is,” CAVED to Eric Holder and the Obama-led Justice Department to weaken Prince William County’s immigration laws, hamstring Prince William County Police in combating illegal immigration, and now he has the gall to waltz across Virginia and lecture Republicans about how “tough” he’s been on immigration.

I’m reminded of the 1984 quote: “War is Peace, Freedom is Slavery, Ignorance is Strength” when researching Stewart’s record in Prince William County. One can seemingly add to that famous line: “Stewart is Conservative”.

Like most politicians, Stewart lies (this is no surprise, he openly admitted to being a liar at the recent Culpeper County Reagan Dinner in February), but part of the reason the Stewart campaign is trying to lie about his primary opponents, such as the false attack on Delegate Freitas’ stance on immigration (Freitas supports legal immigration and opposes illegal immigration, and unlike Stewart he actually has a record opposing sanctuary cities and has voted repeatedly to ban them in Virginia and override the Governor’s veto on the subject) is because he’s trying to distract from his own weaknesses on immigration. He’s bombastic and loud because he doesn’t want people to look at his record in Prince William County. The Stewart campaign is effectively projecting their own candidate’s horrific shortcomings and pathetic record on even the most basic of conservative issues onto two primary rivals. This is straight out of Saul Alinsky’s political playbook.

Stewart brags about working to deport MS-13 members from Prince William. Can anyone guess how many MS-13 members existed in the county before Stewart got elected in 2003? Illegal immigration, MS-13, and gang killings have spiraled out of control in Prince William because of Corey Stewart’s shameful, weak, and spineless voting record on the issue…and now he’s lying about his opponents to distract people from that.

Corey Stewart is nothing more than a political arsonist posing as the fire brigade. Illegal immigration wouldn’t even be an issue in Prince William County had Stewart not voted twice to gut the county’s immigration laws. Instead, Stewart has the audacity to tour Virginia, bragging about how “tough” he is on addressing a problem he created.

Is it really any surprise then that right before he went up for re-election in 2015, Stewart proclaimed that he no longer wanted to be known as an “immigration man”?

It gets worse…not only do Stewart’s credentials on this important issue reek of hypocrisy, he has also resorted to despicable attacks on his fellow primary opponents, Delegate Nick Freitas and Bishop E.W. Jackson. Stewart said E.W. Jackson was “off his meds” when the Bishop announced his candidacy, while he has completely turned a blind eye to racially-charged attacks on Freitas’ last name and Portuguese heritage. 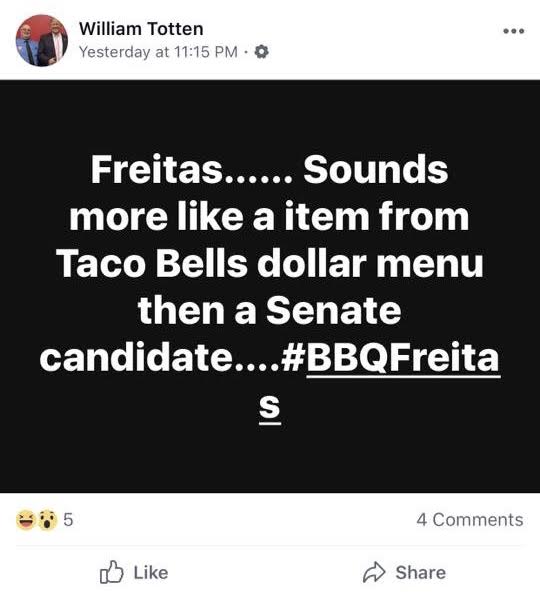 Keep in mind, Freitas is a former Green Beret combat veteran with two tours of duty in Iraq. This is a man who was willing to sacrifice his life in defense of the Constitution and Stewart’s campaign think it’s perfectly acceptable to treat a veteran with this sort of disrespect and degradation. 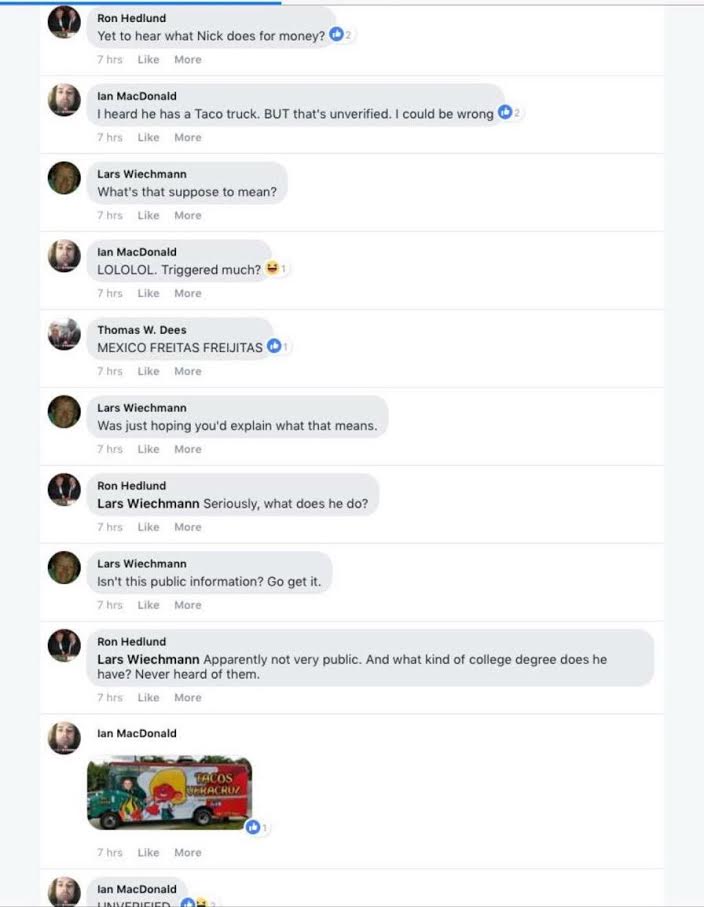 William Totten is the Smyth County Director for the Stewart Campaign.

Thomas Dees is the Regional Field Director for the Stewart Campaign for the Valley and Central Virginia.

Stewart’s refusal to fire these individuals or call on them to stop their disgusting and false attacks on Freitas and Jackson are just another example of the hypocrisy coming from the Stewart campaign.

Calling a sitting Delegate an illegal immigrant, suggesting he is not an American, and mocking him because of his last name is something that is absolutely unbecoming of a U.S. Senator or anyone else. Attacking E.W. Jackson–who unlike Stewart is also a military veteran–for being “off his meds” is equally despicable. Stewart should be utterly ashamed of himself and his campaign for allowing this to happen. Allowing your field staff to hurl racial epithets and insults at two distinguished veterans and rock-solid conservative champions reminds one of the sort of treatment that our veterans received from The Left when they returned from the Vietnam War. The truth is, both Freitas andJackson have more conservative records than Stewart, and both men have served our country admirably. None of this matters to the Stewart camp. Apparently Corey Stewart thinks it’s OK to disrespect our military, veterans, and conservatives if he thinks it helps him get elected, even to the point of attacking someone of his last name and family heritage.

UPDATE:  Don’t ever double-down on stupid. 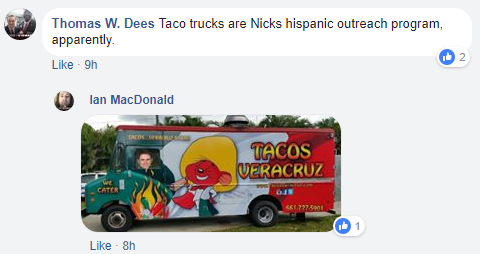 Jack Milligan is a young professional and libertarian conservative from Central Virginia. His first involvement with politics came as a volunteer for the 2012 Ron Paul campaign. He currently works for a major financial institution in Richmond.