Latest Posts
Protests spread COVID-19 around the world
Chap Petersen and Pete Snyder: Get Virginia Back...
And just like that…..COVID moves far to the...
Fairfax Democratic Party Praises Riots
Resolving the Resolution
ANTIFA Exposed
The Modern Scarlet Letter “M” for Mask by... 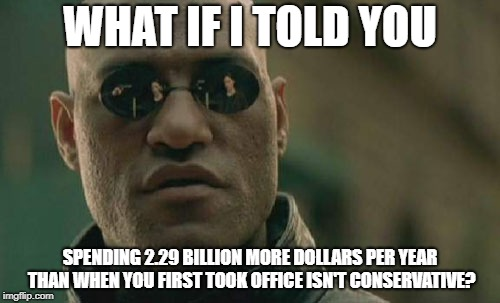 EDITORIAL NOTE: The original version of this post was withdrawn for factual inaccuracies. TBE has investigated the revised version of this contribution, but we encourage our readers to examine it critically, and not necessarily take it at face value. We thank Jack Milligan for his contribution, and our readers for the (somewhat) constructive feedback. TBE would be happy to publish any response to this post.

The wheels are coming off the Corey Stewart campaign, if it ever had wheels to begin with. Slowly but surely, the truth about Stewart’s lack of both conservative credentials and his inability to win a statewide campaign are coming out.

I said in our last installment that Corey Stewart is a “Liar, a loser, and a leech.” I’ve covered his repeated lying regarding his “tough” stance on immigration issues when he’s voted twice to gut his county’s immigration provisions, and I went into considerable detail last time around about how much of a loser Corey Stewart is (and since then he’s only proven to be a bigger loser than even I thought. He couldn’t even win the 9th District Convention Straw Poll last week. Someone should tell the Stewart campaign that taking home the Bronze Medal in a 3-way race isn’t a good thing). Today I’d like to begin our journey examining what a swamp-dwelling leech Corey Stewart has been on the Prince William County Board of Supervisors, beginning with a key issue that motivates almost every conservative in Virginia and across the country: Spending.

Now, before we begin let me just preemptively apologize for the length of this article. I can’t help it that Corey Stewart has such a horrific record.

I would also like to thank my readers for pointing out that I left out school spending in the FY budget for 2007. I have corrected my numbers below to reflect that and would like to thank everyone for pointing out that important omission. My goal here is to present the facts to people, not to mislead. Corey Stewart has a pretty awful record as it stands. There’s no need to present inaccurate information to add to it.

Let’s begin, shall we?

Since Corey Stewart became Chairman of the Board of Supervisors, Government Spending in Prince William County has Increased by over 42%

I challenge the Stewart campaign to point to one conservative who thought Prince William County’s government was too small back in 2007. Since then, we’ve seen the county politically shift from red to deep blue at the same time that Corey Stewart oversaw a spending spree that would make Nancy Pelosi, Chuck Schumer, and Barack Obama look conservative by comparison. I thought the goal of the Stewart campaign was to Drain the Swamp? Does that include DC’s absurd spending habits? 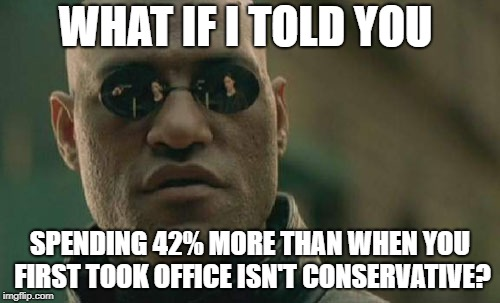 Since Corey Stewart became Chairman of the Board of Supervisors, Prince William County’s budget has grown from $2.21 billion to $3.15 billion.

These numbers are massive, so let’s put them into some sort of reasonable comparison. Under Corey Stewart’s leadership, Prince William County now has a budget that has ballooned to over three-quarters (77%) the size of the State of Delaware. Speaking of Delaware, between 2016 and 2017 the state budget grew from $3.90 billion to $4.08 billion. That equals out to a 4.49% growth rate.

It gets much, MUCH worse. Corey Stewart’s penchant for spending money hand-over-fist in Prince William County like he’s a drunken sailor on pay-day far exceeds population growth…over 50% more than the rate of population growth actually. Let’s take a look at the numbers. 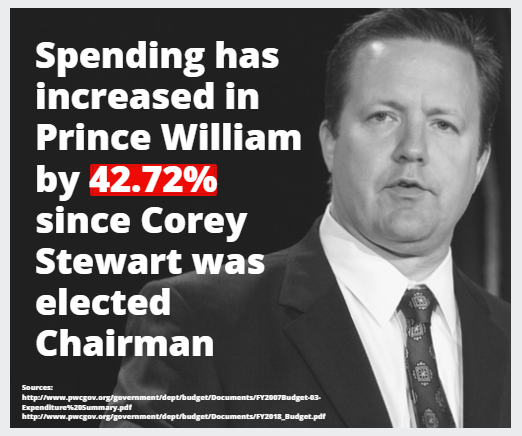 Since Corey Stewart became Chairman of the Board of Supervisors, Prince William County’s budget has spiraled out of control, growing 50% faster than the rate of population growth.

Let’s put these numbers in comparison to other places around Virginia and the Country, starting with that great conservative bastion (sarcasm) known as Massachusetts.

Prince William County’s budget under Corey Stewart has grown as fast as that of Massachusetts.

We have a US Senate candidate seeking the Republican nomination in Virginia with a more liberal record on spending than Massachusetts Democrats. You heard that right. Spending in Massachusetts grew by 39.15% (a staggering number in of itself) from 2007 to 2017. By comparison, spending in Prince William County has grown 42.72% from 2007 to 2018. If anyone is keeping score, Massachusetts’ legislature has been controlled by left-wing Democrats non-stop since 1992, yet even that state has a more conservative record on spending growth than Corey Stewart. It’s hard to imagine the state that gave us Elizabeth “you didn’t build that” Warren being as conservative as Corey Stewart, but we’ve already seen how Corey is a liar and a charlatan on other conservative issues such as immigration, so is it really a surprise to discover that Corey Stewart is a big-spending liberal as well? 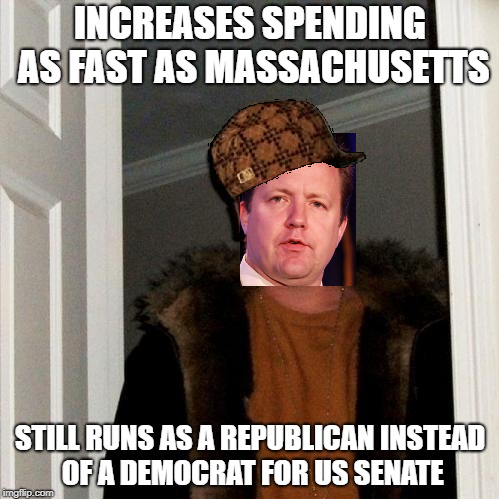 Let’s end this by looking closer to home.

Once again, the true size of Corey Stewart’s massive spending record reveals itself with a stunning comparison. Fairfax County, overwhelmingly Democratic-leaning and easily the largest county in Virginia, saw its budget grow by 27.78% from 2007 to 2018. By comparison, Prince William County’s budget has grown by 42.72% from 2007 to 2018.

We’re left with a difference that is astounding. Prince William County’s budget has grown 53.78% more than Fairfax County since Corey Stewart became Chairman of the Board of Supervisors. Despite being run by Democrats and having a reputation for being one of the most liberal counties in Virginia, Fairfax County Democrats stunningly have a more conservative reputation on spending growth than Corey Stewart.

We all remember the massive Omnibus Spending Bill that was recently passed into law. It’s amazing to see Corey Stewart criticize such an awful piece of legislation, considering the Omnibus Bill pales in comparison to the rate of spending growth Stewart himself has presided over in Prince William County. At this point, my money would be on him voting for more spending at the Federal level should he ever stumble his way into DC. This isn’t just a case of falling asleep at the wheel…that would be bad enough. Instead, Corey Stewart seems to have slammed his foot on the gas for more government spending over the past 10 years. How else do you get 42.72% more government spending and a spending growth rate that is 50% higher than the rate of population growth? 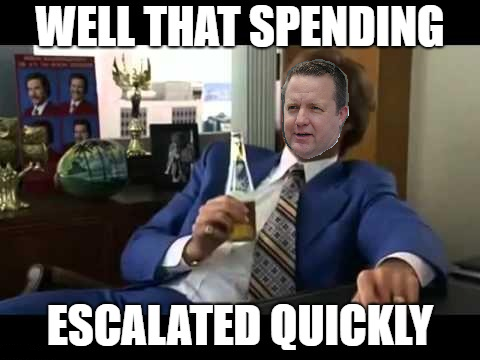 I have spent hours looking at other counties and cities across Virginia, and I can’t find a single one of them that even remotely comes close to the rate of spending growth as Prince William has seen since 2007. Corey Stewart is the King of Spending. His record on budgetary issues is the exact opposite of the word “conservative.”

Do you like Massachusetts-style spending? Do you think Fairfax County’s government is too small? Are you worried that we’re not spending enough of our children and grandchildren’s money in Washington? Then I’ve got a candidate for you! Corey Stewart is the ONLY candidate with a PROVEN record of growing government spending by over 40% since he first took office! Let’s drain the swamp in DC right into the heart of Virginia this June 12th by nominating Corey Stewart for US Senate.

After doing even more research, it’s pretty clear that Prince William County’s spending growth under Corey Stewart dwarfs most others across the entire country. With a rate of growth more than 40% since Stewart was elected Chairman of the Board of Supervisors, it’s no surprise that in order to pay for all this new spending…Corey Stewart has raised taxes repeatedly. 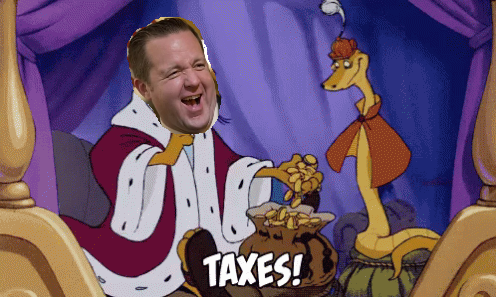 Tune in next time as we explore Stewart’s obsession with penny pinching the people of Prince William into abject poverty.

Since these articles have begun to go out, the Stewart campaign – realizing what a danger facts and evidence poses to their election chances – have gone into overdrive with trying to find any way to disparage me. I have now been attacked by Corey’s camp for being everything from an alleged Democrat, to being some Maine-based college intern for one of the opposing campaigns. What nonsense that is! The stupidity coming from these people is astounding. The Stewart snowflakes are melting in the warm fires of the truth being revealed at last.

If I were a Democrat, I’d be supporting Stewart in the primary, considering Tim Kaine can simply phone-it-in if Stewart is the Republican nominee. And while Maine is no doubt a beautiful state, I’m afraid I’ve never even been to the state, much less lived there. Unlike Corey Stewart, I’m not a northern carpetbagger from a state that borders Canada. Apparently, Stewart’s campaign seems to think that attacking the messenger can help discredit the message. If this is the best response the Stewart campaign can compose, then his campaign is an even larger train wreck than I thought.

Notice how they never once attacked the facts that I was presenting? That Stewart voted twice to curtail Prince William County’s immigration politics? That he has won less votes in Prince William County than Ed Gillespie did? That spending has increased over 40% in Prince William County under Stewart’s leadership? Not only does Corey Stewart mimic the left on his voting record, but his campaign also seems to think that using the left’s tactic of attacking the source rather than the content can somehow save their man from the truth. It will not.
​

Jack Milligan is a young professional and libertarian conservative from Central Virginia. His first involvement with politics came as a volunteer for the 2012 Ron Paul campaign. He currently works for a major financial institution in Richmond.