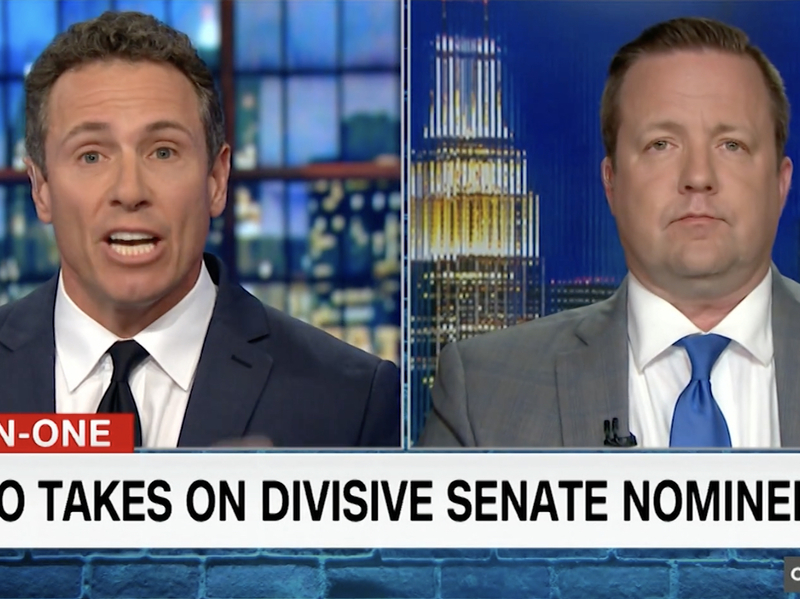 Corey Stewart believes Senator Kaine is the driving force behind the problems at the FBI.  In an interview with Chris Cuomo Stewart said:

I’ll tell you something, I really do believe that Tim Kaine has been at the center of all this stuff that you’re seeing with regard to the FBI. You know, the whole problem is having the FBI spying by federal agency on a presidential campaign,” Stewart said.

What Corey Stewart must do to help unite the entire GOP ticket – and maybe beat Tim Kaine – The Bull Elephant June 18, 2018 at 9:37 am

[…] needs to stop doing interviews on CNN and hostile liberal media.  Talking to Fox News and maybe the “Washington Times” and “Wall […]

I need to mention – there are other Kaine connections to the scandal that are not coincidental. More will be coming on those.

OK – let me lay this out in a rational way. The Obama administration was using NSA eaves dropping (they collect everything) until about April 20th 2016 to spy on many U.S. citizens and certainly political opponents. On April 20th, thanks to Admiral Rogers, the NSA spigot was turned off after he was alerted to this abuse by an NSA Auditor. The system was so open that even private contractors had access to raw NSA data! If you don’t believe this read the FISA Court report where this abuse is documented.

After April 2016, the Administration had to devise another method to spy. Wallah! The Russian investigation is created and the spying continues under the guise of an espionage case.

But why spy? The reasons are obvious and one must ask who would be the natural consumers of the telephone calls, texts and emails collected during the course of a presidential campaign? Would that be SATAN!?!?!? (Imagine this sentence uttered by the Church Lady). But seriously folks the obvious answer is the Hillary/Kaine campaign.

Because the aforementioned is entirely plausible and extremely likely to be true, Tim Kaine must be asked a related list of questions.

I despise Corey Stewart. But I don’t think he’s wrong here. At the risk of sounding like a conspiracy theorist:

–Kaine and Obama knew each other pretty early in their political careers. Both went to Harvard, both have mothers from the same small town

–Kaine’s CoS in the senate was (is?) Mike Henry, who also happened to be high up on Hillary’s 2008 campaign

–McAuliffe, a former fundraiser for the Clintons, was unopposed for the D nomination for Governor

–It’s obvious that Kaine was the VP pick-in-waiting, all part of the Clinton machine strategy

–Two names thrown around for VP tickets in the early 2010’s were Kaine and Bob McDonnell. . .until the latter got into legal trouble

–The problem with having two VP picks from the same state opposing each other is that it limits the impact. If Bob was picked for VP, having Kaine on the D side would be poor strategy. The only thing that could ruin 8 years of Clinton strategizing

–During the McDonell Neil MacBride, the USA for the EDVA resigned suddenly and without a new job in hand. Days later, the feds decided to prosecute McDonnell

–Richmond City government and DPVA are all sketchy too. . .Kaine was Mayor, Stoney was a DPVA director then McAuliffe appointee-turn-mayor, Dwight Jones was DPVA chair or something while mayor

I’m not saying that Kaine is behind everything, or that there’s anything to be behind. But there’s a lot of incestuousness and coincidences that all lead back to the DPVA and Clinton machine.

Thanks for laying this out! I hope the Stewart campaign takes notice and digs deep. Wasn’t the story that Obama wanted Hillary to pick Kaine for VP in exchange for his campaign support of her? Then….we have McAuliffe’s PAC giving about $500,000 to McCabe’s wife when she ran (and lost) a political campaign? McAuliffe being one of the Clintons’ best friends. My state is in major trouble. Can Stewart help get us back????

Interesting, I’m a Richmonder and like your timeline. But explain the Neil MCBride piece of this a bit more. Who is he and how does he fit into this?

Neil MacBride was appointed by Obama in 2009 to serve as the US Attorney for the Eastern District of Virginia, the federal prosecutor charged with investigating and charging Bob McDonnell. He had previously served as Staff Director and Chief Counsel to then-Senator Joe Biden on the Senate Judiciary Committee from 2001-2005.

MacBride announced his resignation from what he called his “dream job” on August 22, 2013, effective September 13, 2013. This was after months of investigating McDonnell with no announcement to charge. It wasn’t until mid-November 2013 that he landed a new job in the private sector, working for Davis Polk in DC.

MacBride was replaced by Dana Boente who announced in early December (shortly after the 2013 election), that he would be filing charges against McDonnell. Keep in mind that the Supreme Court unanimously agreed that Boente vastly over-interpreted the law in order to prosecute McDonnell.

Did you know that Boente met as a group with other DOJ employees and Sessions to discuss his recusal? The meeting was just hours before Session’s public announcement.

Good interview. I liked when Stewart confronted Cuomo about the Left’s extremists and Cuomo said “There is none” and then rambles about being some pinnacle of truth. What a joke. But, this is why people like Stewart. He spend 20 minutes in the lion’s den and never backed down once.

Further, Cuomo goes on and on about “guilt by association” but completely dismisses Kaine and the FBI. Well, McAuliffe was/is a Clinton crony. McAuliffe got Jill McCabe (FBI acting director Andrew McCabe’s wife) to run for State Senate and pushed aside the Virginia Dem Party’s previous chosen candidate. Kaine is Clinton’s VP. There is a WHOLE LOT of association there. If Cuomo believes in guilt by association like he says, then Tim Kaine is GUILTY.

Paragraph 2 is right on the mark.

Esquire hasn’t wasted any time with the bombs. We tried to tell the Stewart supporters that this would happen.

It wouldn’t matter. The left would throw bombs at any Republican. Reagan once noted that even if he could walk on water the left would suggest he couldn’t swim. The esquire article and many more like it are on the way.

The problem is Corey gives them so much ammunition and replenishes it daily.

Jeanine: Haven’t we learned that absent information, the left will make something up. I can see it now. Freitas was a baby killer. Jackson is an Uncle Tom. Once you establish those lies, the rest of the left simply washes and repeats. With Stewart, you have problems but there is no way around the media creating problems when none exist. Unfortunately, the media is the mouth piece of the Democrat Party while academe is the training ground for the Democrat Party.

What is good is that President Trump has taken on the lies and distortions of truth and allowed Republicans some semblance of a fair playing field. Will Stewart win? Obviously a long shot but we don’t give up on long shots do we. Oh, if we did, Hillary would be president.

Since when is it journalistic integrity to source “news” from the fakery on the left? It’s not like these tactics are any surprise. The sad part is deeming them worthy of reporting at all, so much an accomplice or as Cuomo said, “TBE guilt by association.”

As a matter of fact, the interview was encouraging. And it was intimated, almost as a set-up for something down to come somewhere down the line, that some real bad stuff might come out on Kaine. And that got me to thinking this. Who it might be that would have access to some really interesting and wicked stuff that most people don’t have access to, including most news organizations? Any guesses?

Hillary picked Kaine for a reason. He was willing to ignore her corruption at a minimum and may very well have willingly participated in it. The top fbi and doj officials colluded here and Kaine cannot he assumed to have been ignorant of the situation. The extent of his involvement in this expanding and complex web of criminality can not simply be excused, and Stewart is right to call Kaine out.

Was Kaine in on the corruption or was he willfully ignorant? Either way he becomes complicit. He has failed to ever speak about the issues surrounding Hillary. Is this because he was kept in the dark or because he knows and doesn’t want to be tainted? Either way it makes him unworthy to be re-elected as our Senator who is charged with promoting the good and welfare of our country.