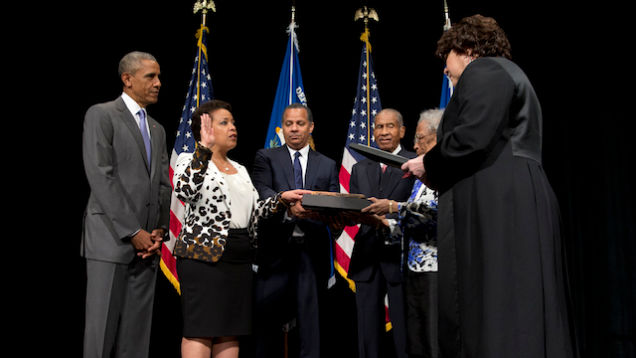 When all is said and done, the rule of law in our Constitutional Republic is like an egg in a recipe; its purpose is to hold the ingredients together.

That is why President Obama, his two Attorney’s General, first Eric Holder and now Loretta Lynch, joined by FBI Director James Comey, have been so busy trying to destroy it – and why they deserve the nation’s collective contempt.

It is also why Republicans, if they take the White House in November, must make the return to blind justice a priority; they will have to scrub and disinfect the entire Justice system.

The rule of law supposes that everyone, regardless of who or what they are, their station in life, or their bank account balance, must be afforded the same protections of the law, and that their individual rights and liberties provided for in the Bill of Rights cannot be set aside without due process.

This is the wall that the Founders, in their immense wisdom, put around the power of the government; every citizen must be protected from the unrelenting appetite of any governmental power to crush the rights of its “average” citizens while enriching a circle of “ruling elite.”

Tyranny is always more appealing than liberty for politicians.

In 2009 Barack Obama was swept into office promising to radically transform the nation. His anti-American radicalism should have surprised no one. At every step of the President’s life he has been surrounded by radical extremists, for whom the constitutional order and the rule of law have always been seen as an obstacle to collective power for the “rulers,” meaning them.

And once elected, give the President credit for this; he went after the rule of law like a lion taking down a gazelle on the Serengeti.

Like all radicals, he understood that breaking down the wall around individual liberty allowed the predators of freedom to attack at will, leaving the rule of law defenseless.

He started the process by appointing Eric Holder as his first Attorney General. Mr. Holder’s appointment was opposed by only 21 Republicans in the Senate in spite of his well-known radicalism.

The future AG had been a major campus protest organizer and the leader in various radical racial groups. After law school, he rose to national attention in the Clinton Administration when he stage managed the highly criticized pardon of 16 Puerto Rican FLAN terrorists in 1999. In the last weeks of the Clinton Administration, he vetted and pushed through 176 Presidential pardons; including the last day pardon of the billionaire international fugitive, Marc Rich, who had extremely close financial ties to the Clinton’s.

As AG, Mr. Holder continued his organized attacks on the rule of law. He was the official enabler of the President, who consistently went around the Congress to simply implement policies that directly contradicted existing laws, such as voter ID and immigration laws.

In addition, the AG also owned numerous policy disasters. Fast and Furious was the now infamous ATF program that top DOJ officials approved to set up straw purchasers of firearms from legal gun dealers in Arizona, purportedly to track the weapons to Mexico. The program was as dangerous as it was irresponsible, and subsequently one of the weapons was used by a Mexican national to murder an American Border Patrol agent, Brain Tracy.

Mr. Holder’s eventual refusal to turn over documents related to Fast and Furious and lying to a Congressional committee, lead to his becoming the first sitting Cabinet member to be held in contempt of Congress.

The AG’s selective use of the law was as damaging as his active breaking of the law. His office failed to prosecute The New Black Panther Party for voter intimidation, yet aggressively used the IRS to audit conservative groups and to deny or delay tax free status to Tea Party and other conservative groups in advance of the 2012 re-election of President Obama.

The obscuringly long list of the DOJ’s attacks on the rule of law under Mr. Holder makes following them a daunting task.

When the Holder era ended, the President turned to another radical, race-focused Attorney General, Loretta Lynch. After a long delay she was finally confirmed by a vote of 56-43 in the Senate, with the help of ten Republicans. This was in spite of her long history of poisonous remarks about the racist government, the oppressive legal process in the country, and her blatant contempt for the rule of law.

In many public remarks, the former Federal Prosecutor from New York, damned the judicial process as inherently racist and oppressive. Astonishingly, even where the law clearly vindicated defendants, as in the famous Duke Lacrosse case, the future AG was quick to defend the District Attorney’s proven malpractice and deceit, because of “historical racism.”

As AG, Mrs. Lynch has distinguished herself as a prominent defender of Islam by refusing to link it with violent murders, and deliberately modifying public information about violent Islam. She has put the rights of illegal aliens and convicted felons above the rights of law abiding citizens, and is an aggressive defender of Black Lives Matter and racist black “nationalists,” such as the New Black Power Party, while using the power of the DOJ to essentially nationalize numerous city and county police departments. She has decreed that little girls and boys all across the nation must share bathrooms regardless of any state law.

Like her processor, the list of her overstepping the law, and enabling a lawless President, is too long for causal review.

After nearly eight years, however, the President, the AG’s and Director Comey of the FBI have demonstrated in undeniable, concrete terms what the attack on the rule of law looks like in practice to the average American citizen.

It may be their most lasting contribution.

The outrageous email scandal of former Secretary of State, Hillary Clinton has finally come to a legal head; the FBI has exhaustively investigated the use of a private computer server by the Secretary, and the cover-up of her obviously illegal use of that server to send and receive classified material, and the failure to turn over 30,000 missing emails.

The FBI director, after Mrs. Lynch had a private meeting with former President Clinton on a DOJ jet parked on the tarmac of Phoenix’s Sky Harbor Airport, declined to recommend prosecution for Mrs. Clinton. Mr. Comey’s news conference spoke for itself. He became himself a shameless enabler, who has taken part in the blatant disregard of an easily understood law that is enforced every day within the U.S. Government against “regular” people. He provided an excuse that allowed his boss the opportunity to evade the decision on whether the Justice Department should move to indict Mrs. Clinton.

Why Mr. Comey took on the task of defending the indefensible can only be speculation. But, there is a sickness in the radical left that abhors the rule of law and the accountability it demands and no amount of pretending can camouflage this decision.

Politically, it could be the subliminal event in the election year that determines the outcome. Nowhere was that more vivid than in Mrs. Lynch’s Congressional testimony, where she refused to answer simple questions of legality 75 times.

The blow back can already be seen in selective polling about Mrs. Clinton and about her trustworthiness and suitability. Average Americans get it; they understand that there are two types of justice now; one for the “too big to fail” crowd, and another for them.

Donald Trump has already seized the crux of this issue (hence his nomination in part) in his withering monikers for Hillary Clinton.

And the Republicans in Congress, to the extent they are not themselves tainted by having voted for two unworthy AG’s in a row, should make this a focused campaign issue going forward as well.