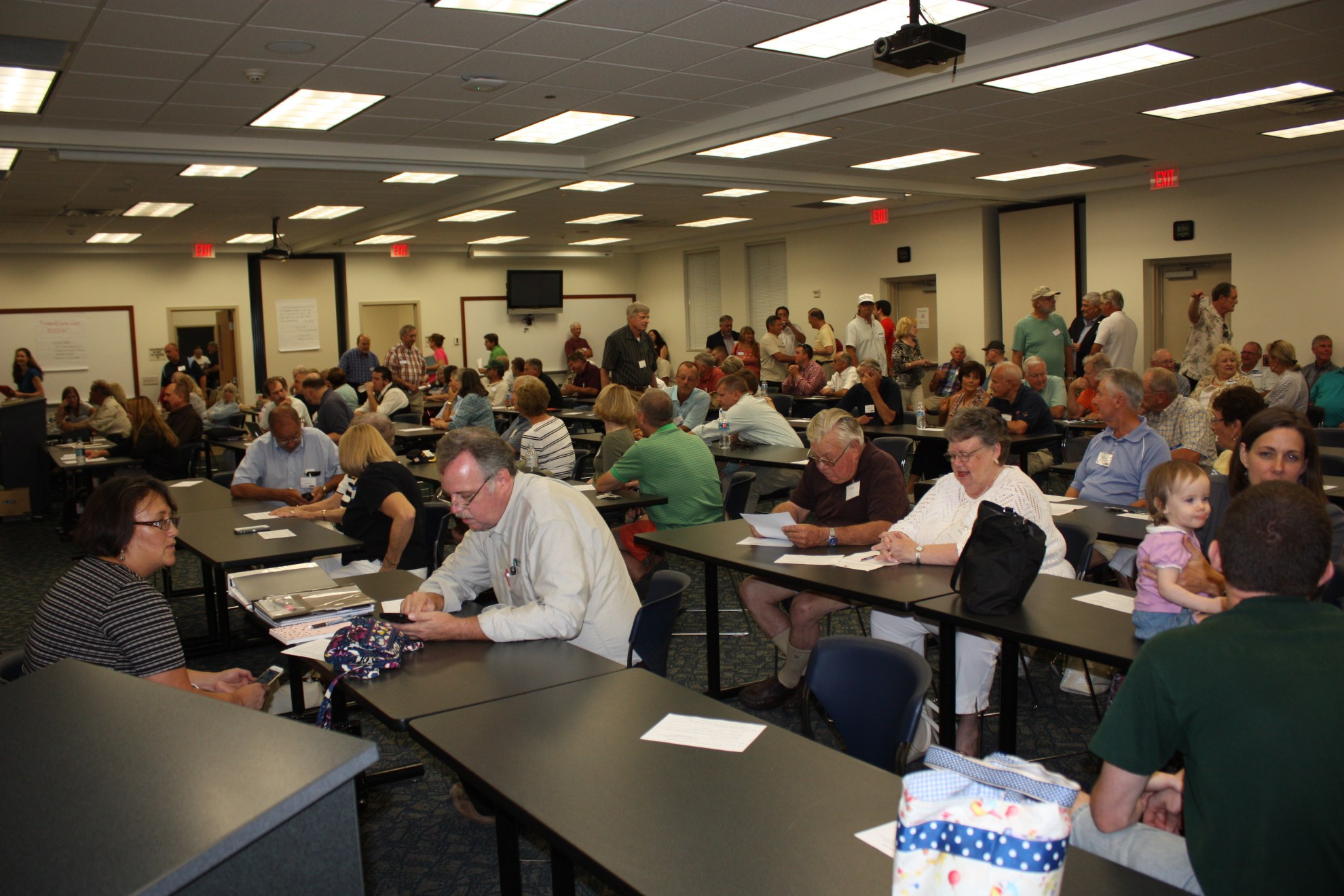 Outside the meeting room there were two tables, one for guests to sign in and another for county party members.  There was also a poster which contained a curious message stating that Frederick County was not Russia.

Inside, there were a variety of additional posters including a supposed quote from 10th district GOP Chairwoman Jo Thoburn denouncing due process and the 1st Amendment, and another declaring that Article I of the RPV Party Plan was unconstitutional. 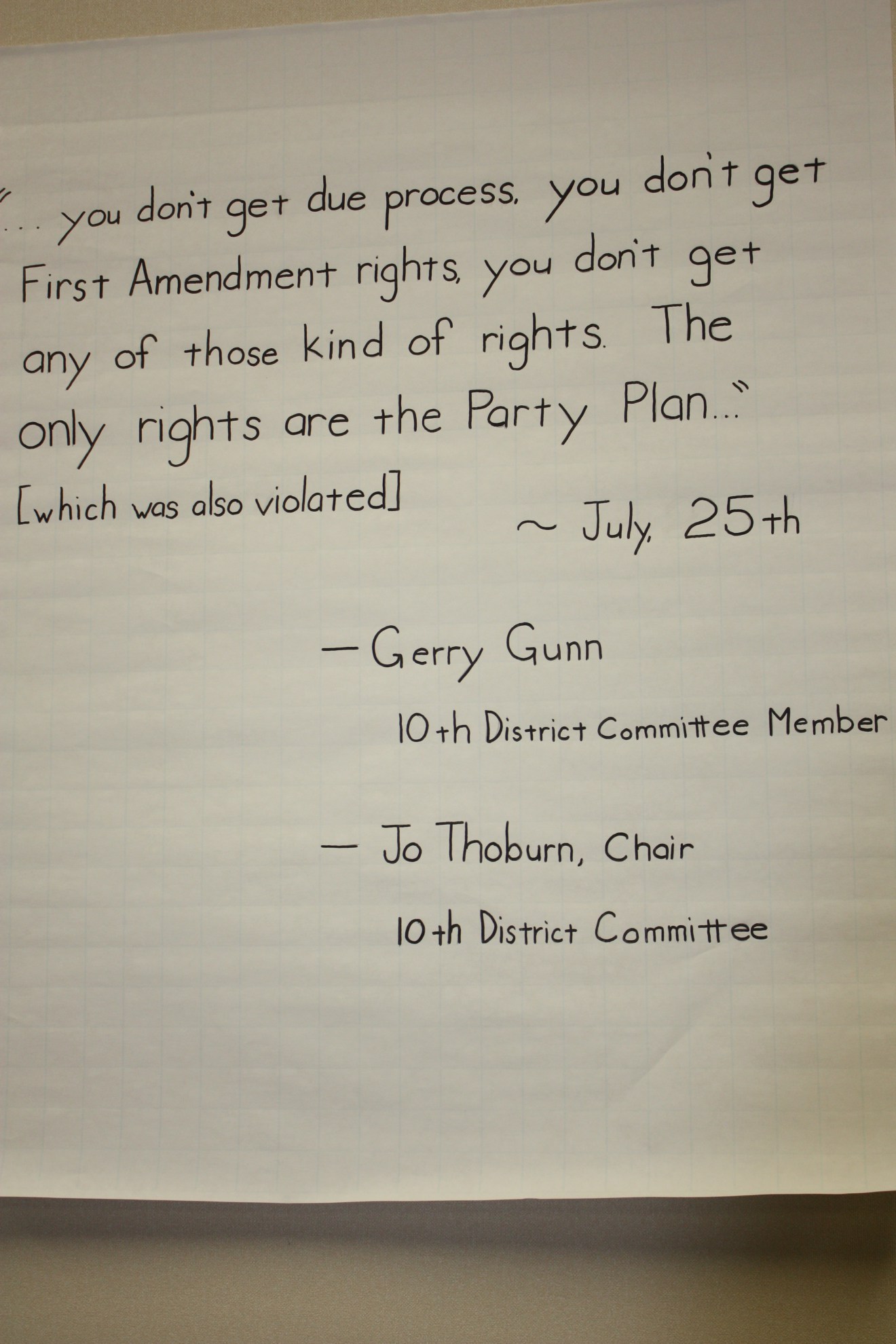 Shortly after 7 PM, a woman (I’m told it was Rose Focht, the vice-chair of the group), declared that the meeting was likely to be very contentious and therefore announced that a neutral party, Bill Card from Prince William County, would serve as chair for the meeting.  However, as far as I observed, her decision was neither voted upon nor ratified by the membership.  After the opening prayer and pledge of allegiance (offered by Delegate LaRock), the meeting got underway.  It was announced that there were 63 members of the Frederick County GOP present along with 34 guests.

The chair then declared that the group would vote on a slate of new members to the committee.  There were some murmurs from the crowd that the chair had changed the order of the agenda of the meeting as the addition of new members was supposed to be scheduled for the end of the meeting.  In addition, no one presented a list of these possible members either in writing or verbally.  One member objected, declaring that she wanted to know more about these potential new additions, but the chair ruled her out of order.  Then, one of the applicant new members agreed that they should be introduced, but he was ignored by the chair.  In the voice vote that followed to add these new members, it sounded to me as if the nays were more plentiful. Curiously, as some guests were scattered among the membership, it was impossible to tell if any of the guests had voted in the voice vote.  For example, although a visitor from Harrisonburg, I could have easily added my vote to the total and no one likely would have been the wiser. Nevertheless, the chair ruled that they ayes had won and disregarded several protests from the audience.

What was even more surprising was that the temporary chairman then called for the meeting to be adjourned without any further business.  Many folks seemed stunned by the voice vote that followed, but the chair again declared that the ayes had carried the motion and thus the meeting was over only about 10 minutes or so after it had begun.  One exasperated member shouted about fascism.

Afterward, people shuffled out.  An older woman left while wiping tears from her eyes. 8 or so people, including Mark Berg, gathered in a circle for a prayer outside the room.

Inquiring into the matter further I talked with several of the members of the FCRC.  I was told that these new members were added to the committee so that one faction would now have sufficient numbers to purge the group of anyone deemed a troublemaker or those who did not support the new leadership.

I spoke with one woman who recorded the meeting and, if I am able to get a copy, will share it as well.

I have to say that although I’ve been going to political gatherings for 21 years now, I cannot recall a meeting so short, or one that was able to ram through their business in such a blatantly corrupt fashion.  One does wonder what sort of fallout will come to the Frederick County Republican Party and the Republican Party of Virginia for allowing these shenanigans to transpire.