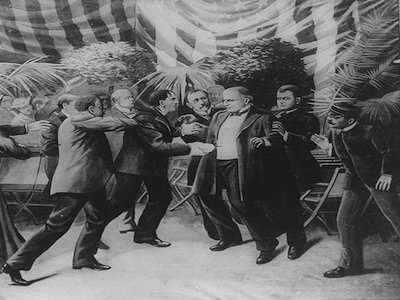 In Banana Republics, where chaos = normality, the coup d’etat is frequently used to exchange one undesirable leader for another. Sometimes the coup is violent, and other times semi-genteel, with the ousted presidente sailing serenely off to a distant land with his family, to live out his days in retired splendor, off his ill-gotten swag.

Until very recently the banana-style of “leadership replacement” has seldom been a part of the American political scene. Presidents have been assassinated, but only by a lone gunman rather than by organized cabals – although suspicion lingers that a conspiracy might have engineered JFK’s killing. Yes, we have experienced vigorous – even dirty – election campaigns in which one side denounces the other side’s candidate as a reprobate, a hater of women and minorities, a warmonger just itching to pull the nuclear trigger, and (in at least one case) for having notoriously “matriculated” at a famous college.

The 2000 presidential election was contested after the fact, when Democrats waged a furious battle to reverse the apparent election of George W. Bush, who had carried the decisive state Florida by just 535 votes. Only after the U. S. Supreme Court halted selective recounts in certain Florida counties and declared Mr. Bush the winner was the election finally settled, in mid-December 2000. Thereafter, the losing party settled into a kind of grumpy acceptance that was finally eclipsed by the dramatic events of September 11, 2001.

Twice a president has actually been impeached and brought to trial in the Senate, but both occasions were triggered by significant events. In 1868 President Andrew Johnson was impeached because he disobeyed the Tenure of Office Act, which the Congress had enacted over Mr. Johnson’s veto. That law forbade the president from discharging any member of former President Abraham Lincoln’s cabinet, which Mr. Johnson had inherited when Lincoln was assassinated. It’s fairly obvious that the Constitution gives the Congress no such power over a president. But the Radical Republicans of 1868 went ahead anyway, after Mr. Johnson dismissed Secretary of War Edwin M. Stanton. Although a strong majority in the Senate favored conviction, Mr. Johnson escaped by a single vote when one senator rose from his sickbed to vote for acquittal. After the dust had settled, the Supreme Court ruled the Tenure of Office Act to be un-Constitutional. (Bravely done.)

The House of Representatives impeached Bill Clinton in 1998 after Special Counsel Ken Starr found that the president had tampered with a jury and perjured himself in a harassment suit brought by former Arkansas state employee Paula Jones, while Mr. Clinton was governor. The facts of those very serious crimes were indisputable. Any ordinary citizen – particularly a lawyer, as Mr. Clinton was – would have faced prison-time for them. But Mr. Clinton escaped conviction because the 45 senators of his party held firm and voted to acquit – thereby preventing the required 2/3 majority from being reached. This writer is not the first to note that conviction and expulsion of a president – as prescribed by Article II, Section 4, of the Constitution – is essentially impossible because jurisprudence is always trumped by politics.

This brings us to the present day. Nearly a year-and-a-half after President Donald Trump’s inauguration, Democrats – whose partisans cannot accept their candidate’s unexpected loss – have been waging a campaign to uncover something (anything!) that can reverse the election’s result by deposing the hated “Donald.” They are grimly implacable in their quest. That “soft coup” – as some have called it – has included the following (not a complete list):

1. Election fraud charges. Following the election, an immediate outcry (unsupported by any proof) was raised by Democrats, who charged that the election had somehow been “stolen” by the Trump campaign, in “collusion” with Russian agents who had hacked into computerized voting-systems. Evidence that this actually happened has never been produced, however. Although state and local election officials have shown that few voting systems are connected to the Internet, the collusion/interference charge has hung, cloud-like, over the nascent Trump presidency. (Web experts note that the few states in which voting systems are linked to the Internet were carried by Mr. Trump’s opponent, Hillary Clinton.)

2. Judicial reviews. To an unprecedented extent, lower-level federal judges have begun to issue stays of presidential executive orders with which they disagree. Their rulings have generally been based on grounds other than Constitutional: e.g., that the order seemed motivated by “animus,” or that it echoed “discriminatory remarks” Mr. Trump made during his campaign. Some of these rulings blocked Mr. Trump’s orders about who should be legally admitted to the country. The Supreme Court has affirmed that the Constitution gives the president this power. But an impression has taken root in the media and in the public’s mind that the courts can legitimately act as “inspectors general” of the president’s policies. Even if the Supreme Court eventually overturns such lower-court rulings, this lower-court activism has bogged down the administration’s ability to govern. It is a very dangerous trend.

3. The Deep State. A determined cadre of government employees opposed to Mr. Trump, his voters and his agenda has been functioning, since the inauguration, as a kind of shadow government to retard (and stop, wherever possible) implementation of the president’s policy-directives. Senate Democrats – frequently aided by a small cadre of RINOs who dislike the president and oppose his policies – have blocked many of Mr. Trump’s legislative attempts to carry out his campaign promises. Fortunately, the tax reform act has been Mr. Trump’s most notable success. The Never Trump faction knew they would face the voters’ wrath if they blocked it.

4. The Special Counsel. Being a political novice, Mr. Trump probably assumed that both sides of the political aisle would accept his election and work with him to move the country forward. Wasn’t that the way it was always done after an election? One might have thought so, but one would have been wrong. This assumption could become the greatest single mistake of Mr. Trump’s presidency. Within days of the election, Democrats launched a clamorous offensive – denouncing Mr. Trump as “illegitimate,” and accusing him of colluding with Russian agents to influence and possibly steal the election. The fury of the charges spooked Congressional Republicans and so hampered Mr. Trump’s governance that he agreed to let his Department of Justice appoint a Special Counsel to clear the air about the collusion charges.

Democrats had no intentions of clearing the air, however. They hoped Special Counsel Robert Mueller would uncover crimes that would produce either Mr. Trump’s resignation or his impeachment and removal from office. But after a year, that investigation has uncovered no evidence indicating that anyone in the Trump campaign colluded with Russians or did anything else illegal. Mr. Mueller has indicted a few small fry for offenses unrelated to the campaign itself, but has found nothing involving the president.

Instead of wrapping up his investigation and calling it a day, however, Mr. Mueller has begun to examine Mr. Trump’s previous business dealings. He has remained oblivious to Republicans’ cries of “foul,” since this is outside the declared scope of the investigation. His referral of the Stormy Daniels payoff-case to the U.S. Attorney’s Office for the Southern District of New York has produced a raid of the home and offices of Mr. Trump’s personal attorney, Michael Cohen. Now Mr. Mueller wants to interview the president, and wild talk is flying about a subpoena demanding Mr. Trump’s acquiescence. Reporters still wet behind the ears – and not a few pols – seem not to realize that the president need not obey any order issued by a judge, prosecutor, or law-enforcement official at any level. The Constitution’s Separation of Powers doctrine protects him from all legal action except the impeachment protocol.

Democrats obviously want the Mueller investigation to drag on through the 2018 mid-term elections – and through the 2020 presidential election, if possible. The discovery of actual evidence damaging to the president is no longer necessary, so long as the snail’s-pace investigation continues to dominate the news and create doubts in the minds of the voters about Mr. Trump’s honesty and fitness for office.

This is the first genuine attempt to execute a non-violent coup d’etat on an American president by non-Constitutional means. Only The People can stop it. Let’s hope (and pray) that they do so by telling their elected representatives that “enough is enough.” With all the problems – both foreign and domestic – that we face, this partisan circus is the last thing we need. And Democrats need to reflect on the precedent they are setting for the next time they put one of their own in the Oval Office. It won’t be pretty. 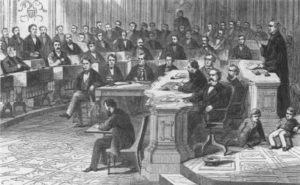 Coup d’etat was last modified: May 4th, 2018 by Woody Zimmerman

Good article Woody.
The overt, soft coup d’etat is continuing against President Trump not only by the Socialist Democrats and their Resist Movement, but also with the coordinated main stream media and the deep state bureaucracy in the form of foot draging in performing background checks. The deep state is also employing nit picky background reviews which require key Obama conspirators to stay in their positions of power and Congress intentionally slowing down the Senate approval process, again to retain Obama’s nefarious influence. Judge Ellis ripped the scab of the festing sore called the deep state. Only time will tell if the truth wins out.

Well-written article! Judge T.S. Ellis even noted today how Mueller is only after Manfort to flip him to try to impeach the President with nothing related to “Russian collusion” nonsense.

Well said, Woody. These are perilous times, though I suspect the Mueller mask is slowly coming off.

Thanks, Cathy. Let’s hope so. This show has gone on long enough. Get the hook!