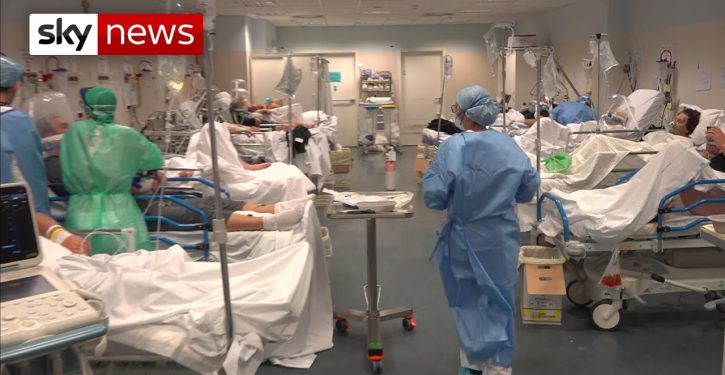 COVID-19 spreading faster in Europe than in the United States

Europe suffered more coronavirus infections than the United States this week. Europe had 74,500 new coronavirus cases from October 7 to October 14. The United States had only 52,300. The gap between Europe and the U.S. widened further over the last several days, meaning that Europe may soon have twice as many new cases as the U.S.

Other countries are suffering even worse from COVID-19. Many countries in Latin America â€” such as Brazil, Peru, Chile, Ecuador and Bolivia â€” have had higher fractions of their population die of COVID-19 than the United States. Mexico’s death rate from the coronavirus is about the same as America’s per 100,000 people, even though Mexico was hit later by the virus, and had more time to prepare for it.

Other countries also have much more suffering to economic contraction as a result of COVID than the United States, whose economy has fared better than most world economies during the COVID-19 pandemic. In the second quarter of 2020, the United States fared better than any other major economy in the OECD than Japan, with Americaâ€™s economy falling by less than half the rate of the United Kingdom. The U.S. unemployment rate peaked at less than half of what many experts had predicted.

By contrast, notes Bloomberg News, vast numbers of people have plunged into poverty in other countries, and hunger is spreading rapidly in countries to our south: “In Latin America, a resurgence of poverty is bringing a vicious wave of hunger in a region that was supposed to have mostly eradicated that kind of malnutrition decades ago. From Buenos Aires to Mexico City, families are skipping on meals and swapping fresh produce for starchy and sugary items.”

The United StatesÂ fared betterÂ economically than most of the world during the pandemic.Â  In the second quarter of 2020, the U.S. economyÂ fell by 10.9%Â less than the United Kingdom,Â 7.8% lessÂ than Mexico,Â 2.5% lessÂ than Canada, andÂ 4.3% lessÂ than France. It also fell byÂ 14.4% lessÂ than India, the worldâ€™s fifth largest economy, whose economy fell more than twice as much as the U.S. economy.

After its losses in the second quarter, the U.S. economy appeared to bounce back.  The U.S. unemployment rate fell to 8.4 percent in August, and 7.9 percent in September, although it remains well above its rate prior to the pandemic. Many experts had predicted that the unemployment rate would peak at over 30 percent. But it never rose above 14.7%.

The head of the St. Louis Federal Reserve Bank said the U.S. economy will bounce back and that lockdowns are no longer necessary. The World Health Organization warns that lockdowns only make sense as a temporary, limited measure, as way to “buy…time.” Thus, it is wrong to use lockdowns as a “primary means” of fighting the disease, because extended lockdowns make “people an awful lot poorer,” resulting in increased mortality due to poverty.

The unemployment rate temporarily rose this week as Congress failed to approve additional coronavirus relief legislation. Many people exhausted their savings recently after their jobless benefits ran out. Republicans and Democrats have proposed competing coronavirus relief bills, but have not yet reached a compromise, and expanded unemployment benefits have expired in some states as a result.

Republicans proposed spending $1 trillion, to cover extended unemployment benefits, aid to small businesses that keep employees on their payrolls, and stimulus payments. Democrats proposed spending $3 trillion, to cover not just stimulus payments and extended unemployment benefits, but many other things as well. For example, the Democratsâ€™ bill â€œprovides $500 billion in direct assistance to state governments to counter the fiscal impacts of the pandemic, $375 billion to assist local governments, $20 billion to tribal governments and $20 billion to U.S. territories,â€ and â€œ$25 billion in assistance to the Postal Service,â€ according to CBS News.

The Democratic bill, the â€œHEROES Act,â€ also contains provisions that might be viewed by conservatives as a poison pill, such as federalÂ aidÂ to illegal aliens, and provisionsÂ releasingÂ many prison inmates.

The HEROES Act would release federal prison inmates just because they are over age 50 or under 18. They could be released even if they have recently committed murder or sex crimes, and have served almost none of their sentence. Inmates would not be required to return to prison “as a result of the expiration” of the COVID-19 epidemic. Inmates would have to be released even if they have a communicable disease such as COVID-19. That is so even though some inmates have deliberately contracted COVID-19 in hopes of getting released.

The HEROES Act requires the â€œBureau of Prisonsâ€ to â€œplace in community supervisionâ€ â€” supervised release â€” all prisoners who are â€œ50 years of age or older,â€ or below age 18. It also requires the release of prisoners with less than a year left on their sentence, and inmates with a â€œhealth condition,â€ such as pregnancy, diabetes, â€œminor skin cancers,â€ or a weakened immune system.

COVID-19 spreading faster in Europe than in the United States was last modified: October 18th, 2020 by Guest Contributor Hans Bader