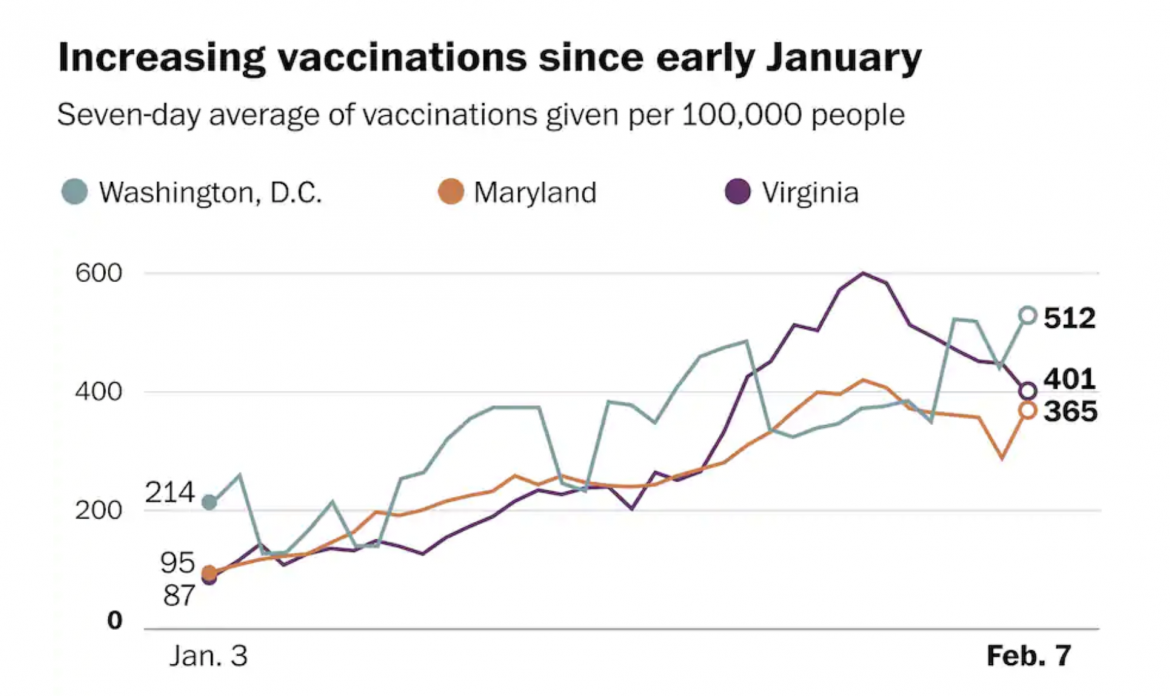 The Washington Post has published an interesting article about how the COVID vaccine distribution has been applied in the three areas in and around DC. In short, it’s been a mess and in some cases a disaster. One might ask, why when the Governors and Mayor should have been prepared? They knew for months the vaccine was coming.

Hospitals in D.C. and Virginia scheduled appointments, then canceled or postponed them. Maryland residents registered at vaccination clinics in Prince Georgeâ€™s County, only to see rules created overnight that barred them from getting their shots. Govs. Larry Hogan of Maryland and Ralph Northam of Virginia and D.C. Mayor Muriel E. Bowser announced that millions of people were eligible. But when those people called and emailed and waited in front of their computers for hours, they couldnâ€™t get through.

University of Maryland public health professor Donald Milton argues residents of the three jurisdictions should have been registered for the vaccine months ago, long before the vaccine arrived.

â€œThere should have been a plan .â€‰.â€‰. along with funding to hire and train staff starting from last summer,â€ Milton said. In the absence of that preparation, the vaccine is often â€œgoing to well-connected and wealthy people at low risk, and not to the people of color who have been hit the hardest.â€

Race is a big issue in all three areas. All three struggle to get Blacks vaccinated. Race and racial equity is very important to all of the leaders in the area. In DC leaders are upset that Whites, in the affluent areas are signing up to get the vaccine at a much higher rate than Blacks in the poorer areas. Mostly white Ward 3 has booked 20 times the number of appointments as Wards 7 and 8. Now there is one day a week when only residents from the poorer zip codes may sign up for vaccines. In Maryland, at one point 7 out of 10 workers in nursing homes were refusing the vaccine and they are largely people of color. Nursing homes are trying to provide incentives to change that.

Virginia is going to have to work much harder if they want more racial and gender equity in their vaccinations:

In Virginia, Ralph Northam has changed the method of distribution of the vaccine several times.

Initially, the team had steered doses to the jurisdictions best equipped to administer them. That meant populous Fairfax County, which with the Inova hospital system had set up a network of sites capable of delivering at least 30,000 doses weekly, was positioned to scoop up more than half of Virginiaâ€™s weekly vaccine allocation. County officials thought the system was fair, noting that the virus has caused the most harm in diverse Northern Virginia, disproportionately affecting Black and Latino residents.

But the state decided in late January to allocate doses to every health district on a per capita basis. Loudoun Countyâ€™s weekly shipment shrank by 40 percent, to 4,275, and the countyâ€™s waiting list grew to 70,000 people. Inova canceled plans to vaccinate 12,000 essential workers in Fairfax County, including law enforcement officers and teachers.

â€œSeeing any empty room of vaccinators is really tough,â€ said Michelle Vassallo, an Inova vice president who is helping lead the hospital systemâ€™s vaccination efforts. She recalled seeing people cry tears of joy and relief as they received their shots in a converted cafeteria, talking about the day they would hug their children and grandchildren again.

â€œIt was hustling, bustling. There was music playing. .â€‰.â€‰. We were at the height of our operations, smoothly moving through. And to have that shut down was just incredibly frustrating.â€

Maryland’s decentralized approach was a failure. Governor Hogan changed his mind on who could get the vaccine and when they could get it.

Hogan soon announced that people 75 and older could get vaccinated, followed by those 65 and older a week later. That swelled the pool of eligible people from 533,000 to nearly 2.1 million, even though just 80,000 doses were available each week.

The imbalance ensured that doses rarely sat unused. But it also caused new forms of chaos. Hogan did not tell county leaders of his decision in advance. Surprised officials, who heard about it at his news conference, responded with divergent approaches that further increased frustrations for their residents.

In Montgomery County, the stateâ€™s most populous jurisdiction, officials rejected the governorâ€™s call in the name of racial equity, focusing on the tens of thousands of health-care workers who remained unvaccinated.

Montgomery has consistently distributed close to 99 percent of its doses, making it one of the most efficient jurisdictions in Maryland, said county Health Officer Travis Gayles. But because doses were scarce, and senior citizens still werenâ€™t eligible, â€œThereâ€™s still this notion that we have a failed system.â€

Meanwhile desperate seniors in Montgomery County were going to the neighboring Prince George’s County to get the vaccine until that county stopped allowing people outside the county to be inoculated.

For residents across the region who are frantic to get vaccinated, who jam websites until they crash, and wait for hours on the phone to no avail, the vaccine still feels out of reach.

One woman in DC waited on the phone through a queue of 400 people only to be told there were no more appointments available and she could not leave her name.

This all could have been prevented but we had politicians and bureaucrats in charge. Their ineptitude will cost an untold number of lives.

An excellent article on unfair vaccine distribution in Virginia at baconsrebellion.com.