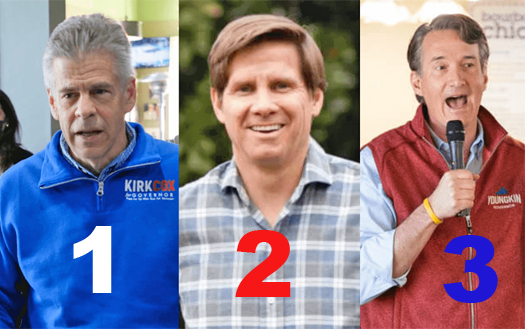 Cox, Snyder, and Youngkin should be in every delegate’s top 3 on May 8th

If you really want the GOP to win Nov. 2, please vote with your mind, not your emotions

About 52,000 Virginians registered as delegates to vote in the May 8th Republican state convention (unassembled), to nominate candidates for governor, lt. governor and attorney general.  And, I don’t expect more than 30,000 to actually show up, as a number of them are “soft delegates” (not really committed , but filled out the form because a candidate’s volunteer convinced them to do so).

Because of the 50% plus 1 requirement to be a nominee , we must vote rank choice for governor, lt. governor and attorney general, since we are not able to go back to polls to vote again in case someone doesn’t get a first-ballot majority.

Given the deluge of direct mail, phone calls, texts and emails we lucky 52,000 are getting, it’s apparent to me that there are only four serious candidates for governor, Amanda Chase, Kirk Cox, Pete Snyder and Glenn Youngkin.

Remember, folks, we are delegates, NOT PRIMARY voters, although this is a hybrid convention/firehouse primary. As such, voters should be thinking realistically – who are the best candidates to beat the Democrats, or, at least be respectable and help down-ballot GOP candidates – especially those running for the House of Delegates, where a net pickup of six seats takes control from the Democrats.

Chase was the only candidate in this race for much of the last year,  and would have been the best being a female, a two-term state senator and staunch conservative.

However, her efforts to ape Donald Trump with outrageous Facebook posts and Tweets (leading to her ban),  her use of the term “white history” to describe Southern Civil War history;  her back and forth media charades on whether to run as an independent or Republican; her support for an independent candidacy (and that of a non-GOP candidate for Sheriff in her home county in 2019), rules her out completely.

With Chase on the ticket, many of GOP HOD candidates will distance themselves from her as they did in 2018 with Trump and Corey Stewart running for U.S. Senate (and getting trounced).

And keep this in mind – thanks to a concerted effort by “The Virginia Project” other Virginia Republicans, there are GOP candidates running in all but six HOD districts held by Democrats. This is in contrast to 2019 when 36 Democrat-held House and Senate seats had no GOP opponent on the ballot.

Winning any of these statewide races will be a challenge, but retaking the House of Delegates and blocking the Democrats from turning Virginia into New Jersey is doable this year.

I also hope delegates are not fatalistic when they consider voting for the most “anti-establishment” “Trump-like candidate.”  If you feel your vote doesn’t matter on who is the nominee, why bother to vote in a Republican Party-controlled canvass?  Go home, grouse at your computer and TV, and be a principled non-Amazon-buying, non-Facebook-using Trumpster and let the Democrats win.

Cox, Snyder, and Youngkin should be in every delegate’s top 3 on May 8th was last modified: May 4th, 2021 by Guest Contributor Ken Reid