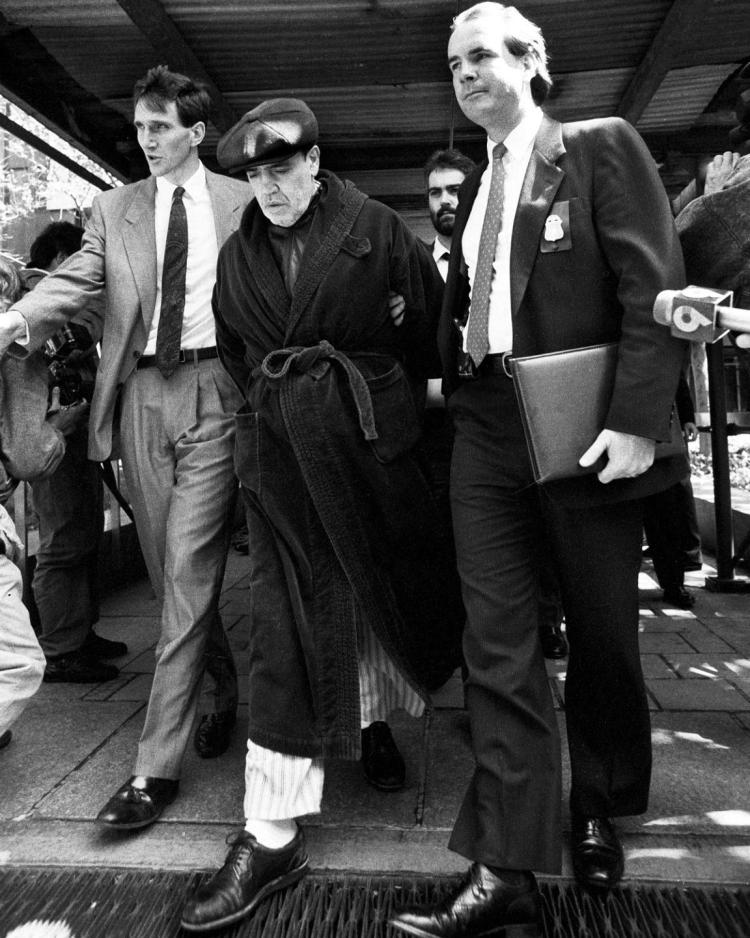 Back in the day, as they say, a young “Italian stallion” named Vincent Gigante1 was a fair-to middlin’ light-heavy from New Jersey who boxed from 1945 to ‘47, winning 21 fights and losing four. At age 19 he retired from boxing and used his skills to become an enforcer in the Genovese Crime Family and personal bodyguard of Mob boss Vito Genovese. Eventually Gigante rose to become head of that Mafia family and the most powerful crime boss in the USA. After years of sparring with federal authorities, he finally died in 2005 of natural causes, at age 77.

I recall the life and times of Don Vincente, not because of any particular admiration or respect on my part, but because his public persona became memorable for what media-types called his Crazy Act. With the feds always after him for alleged crimes of racketeering, theft, extortion, murder and mayhem, Gigante commenced, during the 1980s, to appear in public exhibiting bizarre dress and manner. He was often seen shuffling down the sidewalks near his home, clad in pajamas, slippers and a velour bathrobe – mumbling to himself and exhibiting other signs of eccentric behavior.

Gigante’s behaved similarly at hearings on legal matters, including occasions when prosecutors tried to arraign him for alleged crimes. Medical experts repeatedly found him mentally incapable of attending and participating in grand jury deliberations. Consequently, he avoided being arraigned or tried in a court of law for a long time. Years later, his daughter Rita admitted that she had assisted his contrived persona by holding onto his arm when he shuffled about in public and by speaking for him in some legal proceedings.

Don Vincente’s crazy act came to mind when I caught some news clips of Special Counsel Robert Mueller’s much anticipated testimony to the House Judiciary and Intelligence Committees on Wednesday, July 24th. Videos of those hearings showed someone who hardly resembled the man who in March had closed his 22-month special investigation of President Trump’s alleged Russian-collusion with a brief, decisive statement to the media. On that occasion, Mr. Mueller had appeared clothed and in his right mind – markedly different from the confused, unprepared figure at last week’s hearings, who seemed completely unfamiliar with the 400+ pages of the report which bears his name.

“Mueller II” – as some in my inner circle now call him – frequently gave confused responses to committee-members’ questions, sometimes asked that questions be repeated, and dodged at least 200 questions by claiming that the matters referred to were outside his “purview” or could not be discussed. Unfortunately – so far as I can tell from transcripts of the hearings – no members of either committee asked Mr. Mueller for a clear summary of exactly what he thought his purview was in the uncontrolled investigation which had preoccupied the entire country for nearly two years, distracted the governance of a duly elected president, and arguably perturbed the Congressional elections of 2018.

Representative Jim Jordan (R-OH) probably made the most determined attempt to get the purview-issue clarified when he asked Mr. Mueller how the investigation got started and why certain individuals were charged with making false statements, while others – e.g., Joseph Misfud – were not charged. Mr. Mueller steadfastly declined to answer all of these questions, as well as a host of others. He also claimed to be unfamiliar with Fusion GPS, the organization that received $1 million-plus from Hillary Clinton’s campaign to collect dirt on Donald Trump – an effort which produced the so-called “Russian dossier.”

Throughout the hours of questioning, Mr. Mueller was not commanding. He was not “in charge.” Nor was he defiant or aggressive. One commentator called him “a bumbling idiot.” Even Democrat-aligned critics admitted that the “optics” of the hearings were “disastrous.” Controversial film-maker Michael Moore called Mueller “…a frail old man, unable to remember things, stumbling, refusing to answer basic questions…” Some conservative commentators expressed pity for how such a fine “patriot” and formerly able legal mind had degenerated. Others, including Rush Limbaugh, said Mueller was merely a “figurehead” while others on his team of “17 angry Democrats” actually spearheaded the investigation.

One notable takeaway from the hearings was Mr. Mueller’s answer to the question of whether Mr. Trump could be prosecuted for crimes after he leaves office. His “yes” gave Democrats a momentary thrill, which media trumpeted in early reports of the hearings. Later, though, there was little mention of it – probably because more serious analysts realized that Mr. Mueller’s answer was both ambiguous and problematic. Certainly, an ex-president can be charged with a crime that he might have committed either before or after his presidency. But whether he can be charged with a “crime” that someone believes he committed during his terms in office is subject to much debate and difference of opinion.

You don’t have to be a constitutional scholar to see that allowing such a legal-overreach would open the floodgates to a torrent of post-presidential prosecutions and lawsuits that would turn our entire system of government on its head. Democrats hoping to punish Mr. Trump by doing this are making a serious miscalculation, for no future ex-president – including those of their own party – would be immune from it. Punishing a president with legal action after he leaves office is something “banana republics” do. It would be disastrous for us. Impeachment by the House and trial by the Senate are the Constitution’s remedy for addressing a president’s “high crimes and misdemeanors.” After he leaves office, those matters become moot.

More fulsome accounts and critiques of Mr. Mueller’s “testimony” – if that is not too grand a term – have been written, so I won’t attempt to describe his appearance further in this limited space. But key questions which remain unanswered include these –

We might never know the true answers to these questions, so theorizing is all we can do right now. Accordingly, my theory would answer the above questions as follows:

1. Was that the real Robert Mueller? No, I don’t think so. How could he have degenerated that much in four months? Surely we would have heard of it before he appeared.

2. Did he run the investigation? Yes. Covering for a doddering, out-of-it old guy for 22 months would have been impossible. Word would certainly have leaked out.

4. Why did he do it? As I see it, the crazy act accomplished two things. First, it excused Mr. Mueller from any further responsibility for the investigation’s failure to nail Mr. Trump. The former SP is officially off the hook. No one will want to drag a “sick man” through the mud any further. And second, the myth that a mentally deficient special prosecutor botched the investigation has been created. It gives Democrats a perfect excuse for continuing Congressional committee-hearings, which they hope will lead to impeachment proceedings during 2020. Without Mr. Mueller’s crazy act, the “Trump did it” story would be as dead as Jacob Marley, with no possible way to revive it.

None of this follows the Marquis of Queensbury rules. Democrats play dirty. It’s a duel to the death.