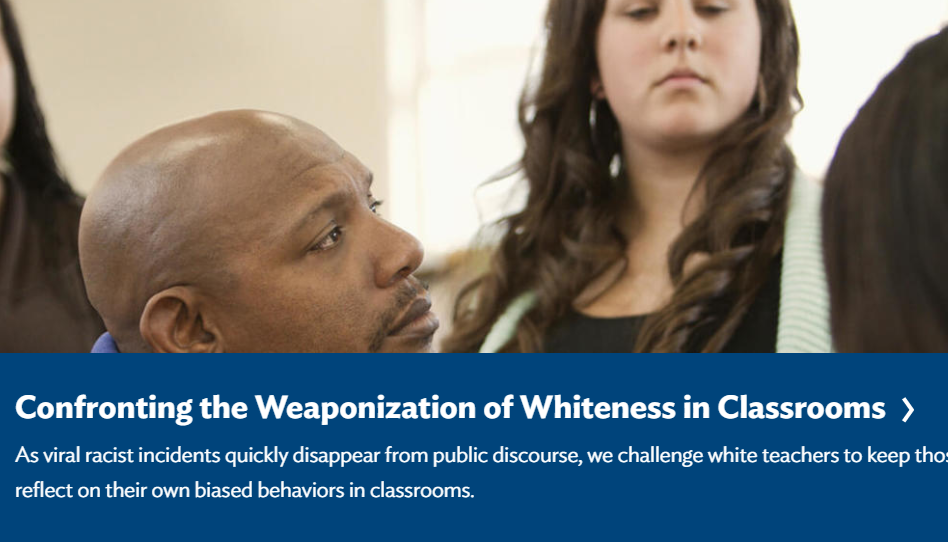 “Confronting the Weaponization of Whiteness” — coming to a school near you. Image from the Southern Poverty Law Center’s “Teaching Tolerance” website

“Sugarcoating or ignoring slavery until later grades makes students more upset by or even resistant to true stories about American history,” the curriculum reads. “Long before we teach algebra, we teach its component parts. We should structure history instruction the same way.”

Loudoun schools have always taught the ugly realities of slavery, typically beginning in the 4th grade in concert with the Standards of Learning.

One teacher quoted anonymously by the Examiner — gee, do you think she fears retribution if she spoke openly? — said that the focus to push politics on students who do not yet know how to read is motivated by politics rather than education. “I teach lower grades in elementary school,” she said. “Our standards were always to teach about famous Americans, George Washington, Martin Luther King Jr., people like that. But, it was all very general and the bigger picture. We highlighted the accomplishments.”

What they’re really trying to do is divide people as early as they can, starting now with kindergarteners. They’re really going to be inciting hate. They’re pointing out that there’s ‘whiteness’ and ‘blackness’ and that’s crazy. We never taught about that in school…. We learn about how to get along with one another and be kind and respect others. But now, with this new curriculum that they’re adding, it’s going to do the total opposite.

Is that an exaggeration? The Examiner says the curriculum guide encourages educators to create opportunities for kindergartners, 1st graders and second graders to learn about “activism and action civics.”

Students should study examples of role models from the past and present, and ask themselves, ‘how can I make a difference?’” the guide says. “These conversations [about slavery] should lead into discussions about current injustices—particularly those that continue to disenfranchise and oppress the descendants of enslaved people—and possibilities for activism and reform.

Here’s more from the SPLC “Teaching Tolerance” program, which claims a reach to more than 500,000 educators:

The program emphasizes anti-bias and social justice. The anti-bias approach encourages children and young people to challenge prejudice and learn how to be agents of change in their own lives. Our Social Justice Standards show how anti-bias education works through the four domains of identity, diversity, justice and action.

One of the topics in the SPLC line-up: Discussing Whiteness. “Why does whiteness fly beneath the radar? Explore this question, and reflect on the role of white privilege and white racial identity formation in anti-racism work.”

Bacon’s bottom line: Initiatives like these are what I call “soft totalitarianism.” The Social Justice vanguard in America isn’t collectivizing farms and starving peasants. It isn’t herding undesirables into concentration camps. But it is totalitarian in the sense that it reaches into every corner of our social, economic and political being. It demands conformity and punishes transgressors. And now, as its power grows, it is indoctrinating our young.

It takes a village to raise a child. Unfortunately, the village is increasingly likely to be run by a Social Justice commissar.

The most extraordinary thing to me is how supine and passive the American people have been in the face of this creeping totalitarianism. Maybe we’re getting the country we deserve. I can only pray that at some point, people begin fighting back.