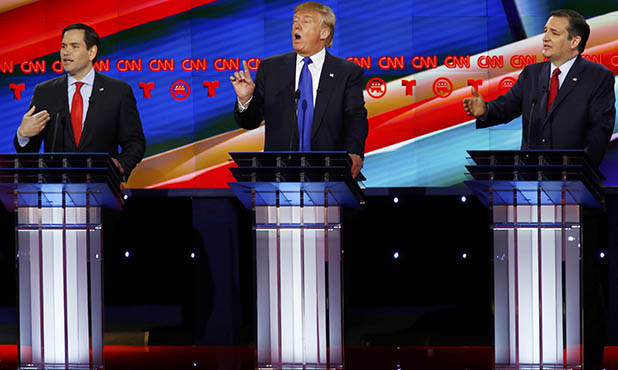 In the final debate before Super Tuesday Ted Cruz and Marco Rubio, sensing the race was getting away from them, teamed up to take the front-runner down, and they did it in spectacular fashion.  Seriously, Cruz and Rubio eviscerated Trump onstage, leaving him sputtering and furious.

For all the Trump supporters looking for him to “Make American Great Again,” let’s run down the list of Trump’s talking points for the night:

6.) Trump repeated his line that he didn’t want to play favorites between Israel and the Palestinian terrorists that have been killing Israelis for decades.

Ted Cruz even pointed out that this summer, when Republicans will be meeting in Cleveland to select our nominee, Donald Trump will be ON TRIAL FOR FRAUD over his “Trump University” scam.  Trump’s response?  “It’s just a civil suit.  It’s not criminal.”

I don’t know how anyone can read that list and not come to the conclusion that a Trump Presidency would be nothing more than a continuation of Barack Obama’s failed policies combined with Hillary Clinton’s scandals.

Ted Cruz continued to have a solid debate performance.  While Rubio mocked Trump, Cruz played the role of prosecutor, forcing Trump to either defend his liberal positions or lie about them.  Cruz made the case that he is the best candidate to beat Hillary Clinton in November, and worked hard, not just to point out Donald Trump’s liberal record, but also Marco Rubio’s liberal position on illegal immigration and amnesty.

Cruz will have a major test of his campaign on March 1st.  He has built his campaign around doing well on Super Tuesday when many southern states will vote at once.  Many have tried to dismiss his campaign as simply targeting evangelicals, but that is not the case.  The Cruz campaign has targeted Conservatives, Christians, and Tea Party voters that make up large portions of the electorate on Super Tuesday, and he has spent months building an organization in those key states.  Cruz is leading in TX and AR, and is within the margin of error in OK, MN, and AK.  There is also CO, TN, and AL that have not taken a poll since as late as November of last year.  If Cruz can win 4 to 6 states on March 1st, including TX, he will solidify himself as the leading alternate to Trump.

Marco Rubio was forced to do something he didn’t want to do last night.  For months, Rubio has avoided taking on Trump, preferring to let others do his fighting for him.  Marco’s plan was to let everyone else get pummeled by Trump and knocked out of the race, then ride to the rescue of the party.  First he let Jeb Bush take on Trump, and watched him get demolished.  Then Ben Carson took on Trump and got crushed.  Next it was Ted Cruz’ turn, but Cruz did not go down.

Now Marco is out of time.  Cruz is not going away, Marco is losing his home state of Florida, and if Trump runs the table on March 1st, it’s over.  Not only that, but Rubio supporters were demanding that Marco attack Trump to prove he can be the leader he says he wants to be.  If Rubio refused to engage in the debate, it would have been seen as a sign of weakness.

The problem for Rubio is that taking down Trump doesn’t necessarily help him.  In a head to head matchup with Trump, Rubio wins.  But in a three way matchup with Marco Rubio, Ted Cruz, and a diminished Trump, Rubio doesn’t come out ahead.  If Rubio’s attacks are successful in peeling away Trump supporters, those voters are far more likely to flow to Cruz, who is doing better than Rubio in March 1st states.  A Trump supporter who cares about illegal immigration is not going to switch to Rubio.  They are going to go to Cruz.

Faced with this Catch-22 situation, Marco rolled the dice and came out swinging, but it is a risk.  If his attacks on Trump help drive his numbers down, they could help Cruz win states on March 1st, and if Rubio cannot finish higher than 2nd in any state, with polls showing he is losing Florida to Trump, the pressure on him to withdraw from the race will grow tremendously.

It all comes down to Tuesday.