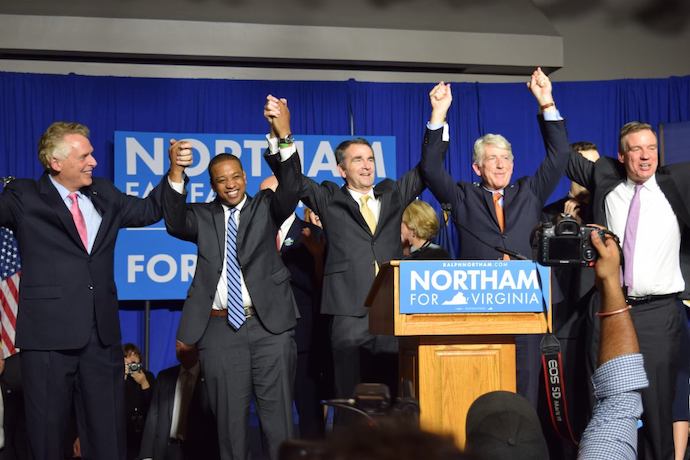 [Revised as indicated below on February 9, 2019 to reflect updated analysis]

Citizens from all over America suddenly have a keen interest in the order of succession for the Virginia Governor.

This began with Virginia Governor Northam’s statement last Wednesday indicating his support for deciding whether a child born alive would get to live or die after birth. That appears to have led to the Friday revelation of then-medical-school-student Northam’s 1984 yearbook in which he appears to be in either a Ku Klux Klan outfit or in blackface.

Northam immediately apologized for the offense, but then on the next day (Saturday) came out and said that he didn’t think he was in the offensive photo… but, oh by the way, he did dress up in blackface once anyway as part of a dance contest. (He said he won the contest, by the way, and he nearly showed off his moonwalk during the presser before his wife intervened).

Needless to say, Northam’s infanticide comments did not stir Democrats at all, but once the racist photo came out, they (along with Republicans) were calling on the governor to resign. And not just within Virginia — the Democratic 2020 candidates were racing one another to call for Northam’s resignation.

If the governor were to resign, the lieutenant governor — Justin Fairfax — would assume the office of governor for the duration of the governor’s term. That is what people thought would happen… until Sunday.

On Sunday, allegations surfaced that Justin Fairfax had sexually assaulted a woman at the 2004 Democratic National Convention. Justin Fairfax immediately denied the allegations, but said the Washington Post knew about the allegations and refused to print a story because they found numerous inconsistencies and “red flags” in the accuser’s story.

With surprising speed, the Washington Post called Justin Fairfax a liar. The Post said they didn’t run the story because they could not get past the ‘he said/she said’ nature of the story. That is a far cry from LG Fairfax’s initial public denial.

First as a college student, later as a prosecutor, I spent years working to prevent sexual assault, and I don’t mind telling you that it ticks me off to see Fairfax’s first reaction is to attack the person accusing him instead of offering facts that might corroborate his denial of the allegations. And if the situation cannot be moved from the ‘he said/she said’ category, how is that to be handled? Only time will tell.

If the Lieutenant Governor were elevated to the Governorship or if he resigned — now a genuine possibility — then the current President Pro Tem of the State Senate “assumes the duties” of the lieutenant governor.   [UPDATE:  At that point, there is a bit of a dispute.  Because the General Assembly has intentionally left open the position of LG, it may be argued that that was intentionally done in order that the next LG would simply be decided at the next regular election of the 3 statewide offices; however, Art. V, Section 7 of the state constitution also seems to give the power to fill this office to the Governor.  Thus, Gov. Northam could effectively pick his own successor by filling LG Fairfax’s position and then resigning!]

The current President Pro Tem of the Virginia Senate is Senator Steve Newman of the Lynchburg area. Steve is a Republican — a mild-mannered conservative who is well-liked on both sides of the aisle.

Interestingly, Steve would NOT have to give up his Senate seat as he assumed the duties of the LG. That means that he would get his vote as a state senator, and he would also get to vote to break any ties that arise in the chamber.

It is worth noting that the entire General Assembly is up for election this year and the state senate is currently 21-19 in favor of the Republicans. If the Democrats take control, they can elect their own President Pro Tem of the Senate, who would then have his/her own senate vote and also be able to break ties.

That gets us up to Sunday of this incredible week. Since then, things have become even more strange.

Among those who were calling on Gov. Northam to resign was the third in the line of succession behind the Lieutenant Governor, namely Virginia’s Attorney General, Mark Herring. On Saturday, Herring said : “It is no longer possible for Governor Northam to lead our Commonwealth and it is time for him to step down.”

But after all that — after calling for Governor Northam’s resignation for his blackface/Klan photo — Attorney General Herring today admitted to wearing blackface himself when he was a young adult in college.

Suddenly, Democrats like U.S. Sen. Mark Warner, who were calling for Northam to resign are pointedly not calling for Herring to resign. Why? Because he is the last of the three Democrats in the order of succession of to the Governor’s office. Next in line would be the Republican Speaker of the House, Kirk Cox.

You may recall in December of 2017 when one of Virginia’s House of Delegates races ended in an exact tie, and so was determined by drawing a name out of a bowl. That name was a Republican, giving the GOP a meager 51-49 majority — the majority that elected Kirk Cox as Speaker.

If for some reason Kirk Cox couldn’t ascend to the governorship, the final element in the Virginia succession is for the House of Delegates to elect a new governor.

The logical selection to fill the position is State Senator Mark Obenshain. Obenshain lost the race to then-state-senator Mark Herring by only a few hundred votes out of more than 2 million cast. Surely, had the people of Virginia known of Herring’s blackface antics, it would have cost him tens (hundreds?) of thousands of votes and Obenshain would have won anyway.

In a year when the entire General Assembly is up for election, with both houses divided by one seat each, this set of disasters for the Democrats is truly unprecedented. And every last bit of it is self-inflicted.

Ken Cuccinelli is the former Attorney General of the Commonwealth of Virginia. In the 2016 presidential race, he directed nationwide delegate operations for Sen. Ted Cruz. Ken currently leads the Senate Conservatives Fund and is General Counsel for FreedomWorks.