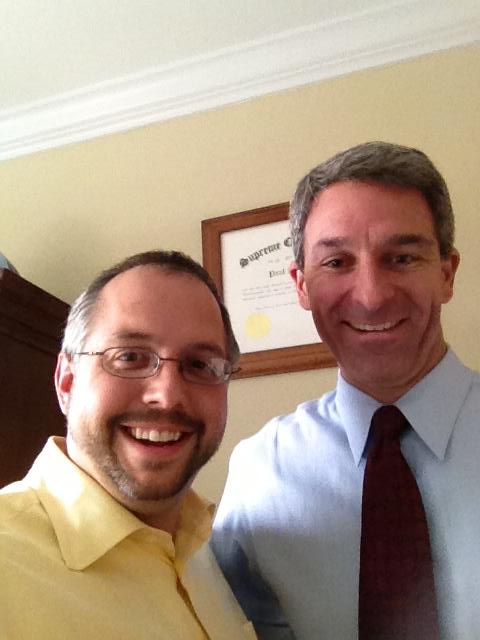 I thought it was idle chatter when I first read about it, but right now, it looks like Ken Cuccinelli has the inside track on being the next Virginia Supreme Court Justice.

The Senate is the hurdle.  It looks like he might make it past the full Senate tomorrow.

“He served for four years as attorney general of Virginia” and longer than that as an attorney, Sturtevant said. And he said Cuccinelli is “somebody, I think, who’s not been politicized” or used as a “political pawn.”

“We have to fill the vacancy,” Sturtevant said.

Someone planning to run for Governor in 2017 must be working overtime to get Cuccinelli elected to the bench.

Having worked with Cuccinelli in detail on legal items, I can tell you he is not the intellectual lightweight the left makes him out to be.

He will be an incredible force on the Supreme Court.

UPDATE: Was Cuccinelli not consulted about this first?

I have been approached to consider an appointment to the Virginia Supreme Court. I am humbled and honored to be considered for such a position, but it is not something that my wife and I have previously contemplated. Together, we will prayerfully review this possibility in light of our family’s needs and whether or not this is the best way for us to contribute to making Virginia a better place to live going forward.

It seems he was not consulted, but that he will consider it.  This points even stronger to the influence of a 2017 gubernatorial campaign pushing the appointment.

Update: Cuccinelli on the Virginia Supreme Court? was last modified: March 8th, 2016 by Paul A. Prados

With every public statement, Sturtevant makes himself out to be a bigger fool.

IDK…I feel there are mixed feelings about him regarding the convention and Bill Bolling a couple of years ago….doesn’t feel like a fit to me.

Seems like a very reasonable fit to me but I have always been of the opinion that his chances at a successful rerun at the governorship were a very slim possibility anyway. As for getting past the Senate though that will be a major hurdle for him.