Republicans Should Join Cuccinelli's Call For A Special Session 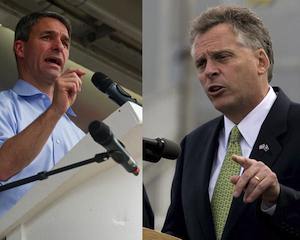 Last week’s call by Attorney General Ken Cuccinelli for a special session of the General Assembly to reform the Commonwealth’s ethics laws has sparked a variety of reactions.Â  Gov. McDonnell, whose own behavior is what brought the issue of ethics reform to the forefront, naturally wants the issue to be handled after he’s out of office.Â  He’s also likely wary that a special session could get off track and turn into an opportunity for Democrats to launch a futile but high profile impeachment effort.Â  Lieutenant Governor Bill Bolling (nickname “Snacks”) also opposes a special session, as does House Speaker Bill Howell.

But here’s the key to why more Republicans, including E.W. Jackson and Mark Obenshain, should support a special session: Terry McAuliffe, whose own ethical history and current scandals make McDonnell look saintly by comparison, also opposes a special session.

Everyone, I think, recognizes that in the wake of the Governor’s scandals some sort of reform is inevitable.Â  The question is the timing.Â  I understand the reaction against a special session, which in the current charged environment could lead to hasty overreactions and populist demagoguery.Â  Plus, we already have a regular session of the General Assembly scheduled for January, just four months away, and calling the legislators to Richmond would be costly to taxpayers, and would mean our Republican incumbents won’t have as much time to campaign for re-election in November, and would be prohibited from raising funds until the session was adjourned.

But Republican opposition here completely misses the political opportunity.Â  As it stands now, McAuliffe will certainly delight in being able to use the Star Scientific/chef scandals as a shield against discussion of his own ethics issues, and will continue to use it against Cuccinelli.Â  Pushing for a special session is political jiujitsu, turning that shield into a club to beat McAuliffe over the head.

Norm at Bearing Drift nailed it:

Perhaps. But the politics of the issue scream â€“ loudly â€“ that the best thing the stateâ€™s Republican leadership could do is follow Cuccinelliâ€™s lead and get the special session underway. Democrats â€“ following McAuliffeâ€™s lead â€“ have put themselves in an untenable position.

Regrettably, too many Republicans have joined them.

Republicans adopting this approach are missing the politics of reform â€” and that the one who has the most to lose isnâ€™t their seat mate (or themselves), but Terry McAuliffe.

The Governor clearly won’t go along with this, and it seems extremely unlikely that a super-majority of the General Assembly will go along, particularly with Speaker Howell providing a bulwark against it.Â  So, even if there is trepidation about how a special session would unfold and its attendant consequences, getting on the right side of reform is essentially a cost free way to skewer Terry McAuliffe where he’s weakest.Â  What’s not to like?