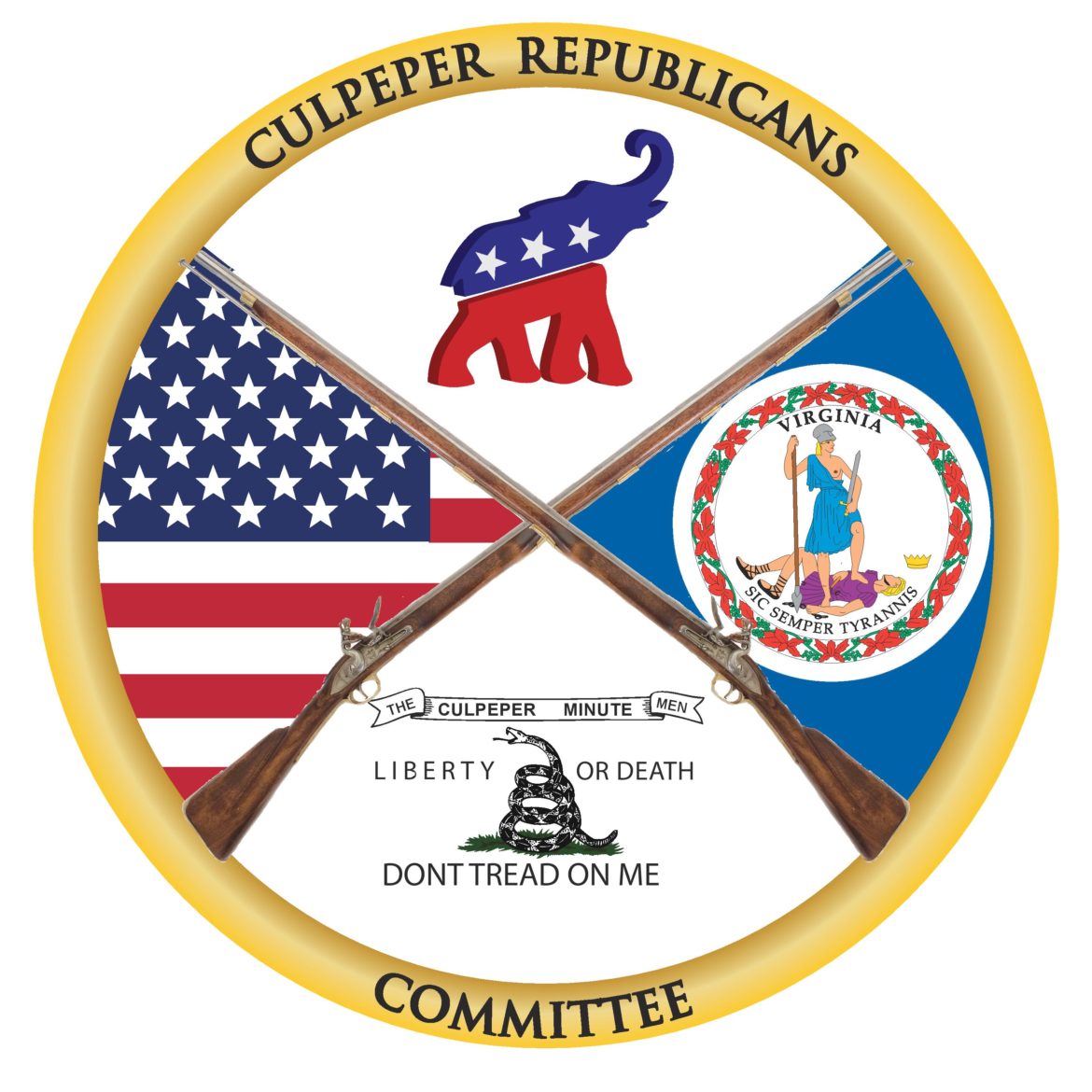 Culpeper Republicans censure Jill Vogel and call for her resignation

Culpeper County Republicans have votedÂ unanimously to censure state Senator Jill Vogel and requested her resignation.Â  They have also stated they will not support her in any future election.Â  Read the whole resolution, there is no equivocation: 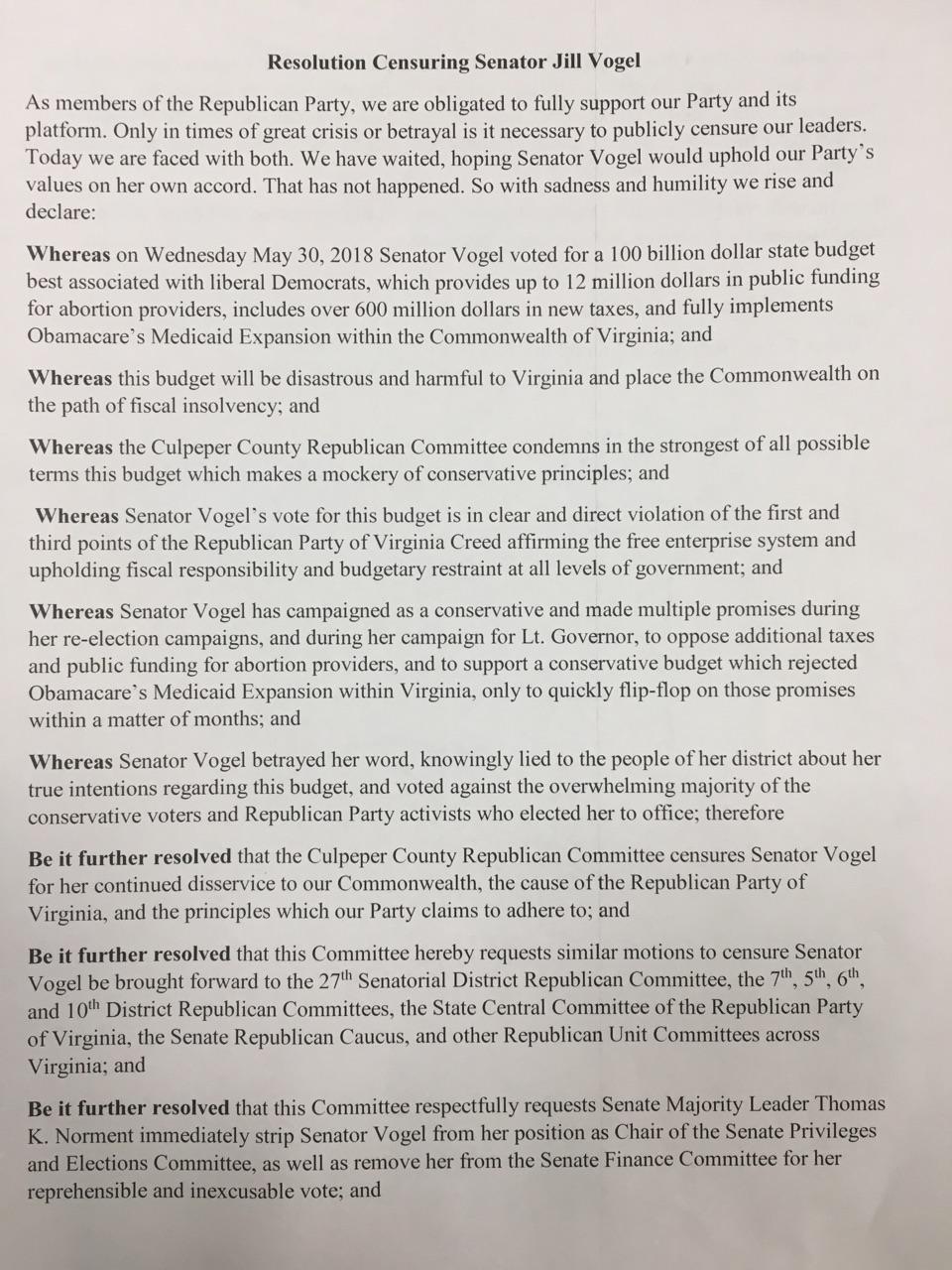 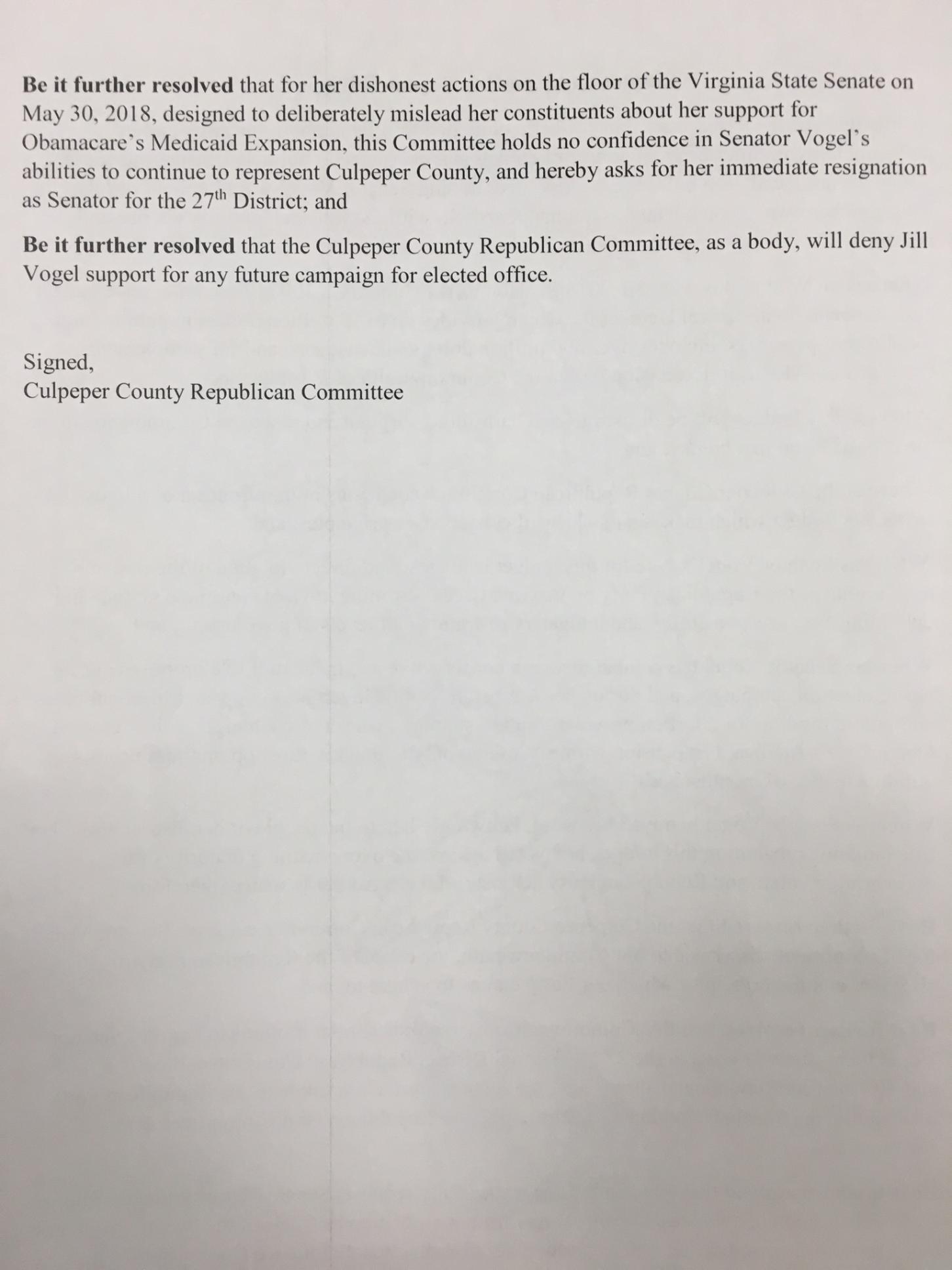 AtÂ last Monday’s meeting of Loudoun County Republican Committee Chris Anders, a member of the committee, read a similarÂ resolution to censure Senator Vogel.Â  There was no vote held during the meeting.Â  The resolution has been sent to the LCRC issues committee.Â  I hope the committee revises the resolution to incorporate much of what the Culpeper resolution contains, and allows us to vote on it at the next Loudoun County Republican Committee meeting in August.Â  Our elected officials need to be held accountable when they betray us with their votes. If we continue to support electeds who vote against the best interests of their constituents and the Republican party they will continue to betray us. They need to be held accountable for theirÂ betrayals and their votes.

The problem with Vogel’s argument about this “is the best deal they could get” is that Republicans controll the house and they could have passed a clean budget without the expansion… if our Democrat governor wanted to shut down the state over abortions and Medicaid… that would have been on him!

Would be nice to see if the newly constituted Fauquier County Republican Committee has the stones to censure Sen Vogel as well… but I’m not holding my breath.

While I truly appreciate the Censure gesture, and thatâ€™s all it actually is, a gesture. I think that our party units are not equal nor stronger than the electeds and the special interests propping them up. Until we get to parity and beyond, resolutions and censures are the equivalent of shaking our fists at the sky. A much stronger party are the teeth required for a censure bite.

Understood, but still you have to start somewhere.

Censure isnâ€™t the starting point, itâ€™s like the last straw. Iâ€™m pretty sure most of the grassroots of the party told her their thoughts before her â€˜flexibilityâ€™… She made the political calculation (â€˜They canâ€™t touch thisâ€™) and proceeded to barter away our Commonwealth for her special interests.

Either A) she feels untouchable by any challenger enough so that the Republican conservatives of the district can go tinkle on a rope and/or B) Sheâ€™s ascending a new career path where she doesnâ€™t have to bother with the electoral riff raff.

Because the candidate/elected – party partnership dynamic has been so abrogated, the grassroots, rank and file are simply free labor and a money fountain to be harvested as needed.

The fact that we have to actually try to censure her/them as a start means that there is absolutely nothing in between.

AND, for bonus points, think about this one….

OUR RPV State Central Committee FAILED to pass a resolution condemning Medicaid Expansion. WHAT does THAT tell you?

Make sure to save some of the Censure sticks for the SCC who stabbed us in the back BEFORE Jill, Hanger, and the traitors used this â€˜flexinilityâ€™ to spit in our face.

This whole thing tells me there’s no reason to be Republican. Feckless leadership at the state level and local / county organizations akin to social clubs where we, the unwashed masses, should just be grateful for what we have and pull the lever for anyone with an “R” after their name.

Just tired of it all.

You and me both brother! But the name of the game for the forces of darkness is opposition suppression. They WANT you to get tired and quit. Or even better, join a pointless ideological hug circle outside the party. The only reason weâ€™re not on top yet is because some of us do not play well with others. Read more Patton, read more Sun Tzu. Republicans need to come down from the stands and off the sidelines â€” itâ€™s time to MGGA â€” Make GOP Great Again.

I was a supporter of Jill’s last year and am in absolute shock as to how she sold us out. Really disillusioned.

Sold out for a few pieces of silver. Fights for $ for her constituents, she says, but then gives that and more away to Democrats and their insatiable hunger for big government. Quit, Jill, Republicans deserve better.

I listened to her try to explain that vote for 30 minutes, and came away more sad and disappointed than before she spoke. She said she fought hard for the Republican bill, but eventually recognized that it was hopeless, leaving her with only one option; bargain for a few changes to the Democrat bill in exchange for her support.

She essentially sold her vote for a bit of extra pork. Very sad. This is sorta the opposite of a Trump deal. Trump pays off people like Vogel with a few crumbs if that’s what it takes to get the big win. It’s the difference between fighting to win, and settling for whatever you can get. Trump would walk away from a bad deal. Vogel doesn’t even recognize a bad deal when she is drawn into it. People will only remember her sellout, not the pork.

Maybe sheâ€™ll do an apology tour.

This is true. She has acted in the best interest of the district at times in the past, but she lost her way and retired hopefully before she became more of an embarrassment.

She has one year to make some serious changes before I predict she is Cantored in 2019.

She did this on purpose and there was a method to her madness.

She resigned with that vote, whether she realizes it or not. We will soon see how she will be compensated.

Unity after the primaries, eh?

Huh? She hasn’t been primaried. But she may be next year. She’s done in Republican politics.

Certainly not a Tareyton smoker??

One election comes to town, another is right behind.

I liked her little before and I like her less now.

Elected republicans have gotten away with bad votes because the Party has lacked the muscle and fortitude to keep them in line. We need more resolutions like Culpepper’s.

PS She clearly did it because she is a social climber who wanted hospital donations for whatever her next loser campaign is. They bought her vote.

Guess again! She is an election law attorney for the Republican Party and not at all the dilettante you claim. Disagree with her as you will, claiming she is not seriously devoted to Republican politics is a claim that misses the mark by a mile.

She was already socially liberal and now she dropped the pretense of being fiscally conservative. She’s a democrat or, even worse, a Cantor republican.

You are nailing it today!

Maybe she is not leaving the party but the party is leaving her?

Or sheâ€™s telling her partner they are not needed and sheâ€™s going it alone?

When you have a weak party and strong electeds, this is what you get.

Apparently itâ€™s not that easy being a RINO.

How would you know? Are you a Democrat? She is clearly no longer ‘devoted to Republican politics’.

Not a Democrat — I see little value in party politics. This episode places a neon sign on one of the reasons.

Jill Vogel is clearly involved deeply with Republican politics in Virginia on many levels.

This may cost her future support, but that says more about the party than it does about Jill Vogel. She has given much of herself to Republican politics.

How quickly you forget. Why even start as a Republican if thinking at all independently leads to charges of treason and party punishment? It takes a masochistic streak, eh?

Thanks for your expertise on party matters. The units seem to be dealing with this through official and appropriate channels. We got this chum.

I offered an observation and no expertise on your so-called party matters.

Indeed, you are the same Rocinante who previously suggested this unity would show itself right after the primaries. When is the new starting date?

The average Virginian benefits from a competition for their political affection, a competition in decline over the past decade. Please do rectify the situation.

And she doesn’t even need their money! She is very wealthy and her Dad is even richer!

If itâ€™s not about the money… whatâ€™s left?

But she wants (and after this vote is going) to spend your money, not hers.

I agree! Please come to the next LCRC meeting and tell them although I wouldn’t be surprised if LCRC issues committee won’t allow any resolution to come up for a vote.

Who is on the issue committee? Do they regularly meet? Any minutes or record of their discussion and debate?

Ugh. Until a few months ago, I was until I [insert lame excuse here]. Now, I’m on the outside looking in.

Come back, come home, all is forgiven! Still much work to be done!

More censures are coming. People have had enough.

Not sure that will happen in Loudoun, but I hope it will.

Keep pushing it. Be loud. Challenge those opposed to the resolution. They will probably say “we can’t loose the majority” but of course the majority of real Republicans has already been lost. Call them out for the RINOs that they are and start a campaign to expel them from the Loudoun committee. If they expel you, so what? Be even louder and continue to call them out. This is a war for your county and VA.

I’m not being naive. This is hard stuff to do and very nasty business. Keep focused on what they have done to us all. Clean house.

You gotta fight,
for your right,
to Party!

Iâ€™m just happy with Republicans taking it seriously enough to consider and examine the issue and her actions â€” she WAS a standard bearer and it seems she replaced the standard… with a dagger.

Ouch. I have a sharp pain in my back.

Thank you for taking a stand! It’s hard to believe that SHE was our nominee for Lt. Governor in 2017. Last year there were other signs of her not being who she claimed to be and we didn’t act accordingly.

I think Bryce Reeves would have won the primary if his campaign didn’t run that late ad criticizing Vogel for voting to confirm a homosexual judge.

Nope, she had the nomination locked… then. Bryce would have been better.