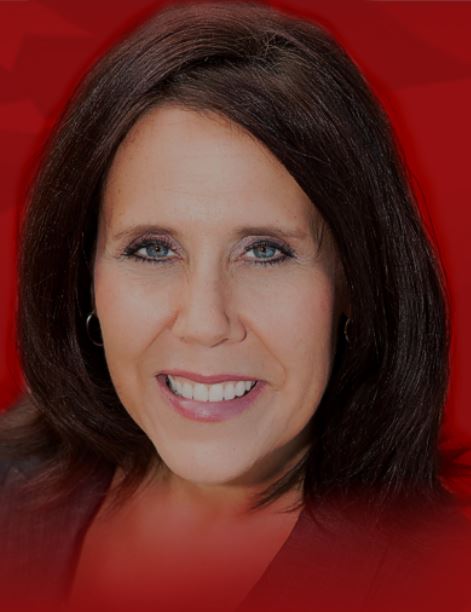 In an election with a crowded field you are able to pick up on clues to how the race is going.  For instance, when most of the candidates in a race band together to attack one person, it is a pretty clear sign the target of their ire is the front runner.  In the race to replace retiring 6th District Congressman Bob Goodlatte, that front runner appears quite clearly to be Cynthia Dunbar.

From the outset of this campaign Dunbar and her supporters have been the subject of non-stop attacks and what appears to be a coordinated smear campaign by the other candidates in the race.  They have lobbed every conceivable attack on the Dunbar campaign you can imagine.  Unfounded accusations of corruption, conflicts of interest, and illegal/unethical behavior are actually some of the tamer attacks to take place.  Once you throw in the tasteless memes, personal attacks on Cynthia’s marriage, and the systematic effort to intimidate Dunbar supporters, you have the recipe of downright panic from a cabal of candidates and power players in the 6th district determined to stop Cynthia Dunbar at all costs.

While the numerous charges leveled against Cynthia and the 6th District committee (more details on those, along with a response can be found here) will be dealt with in turn, I first want to call attention to two individuals who have been particularly nasty in this campaign.  Those individuals are Ginger Burg and Cole Trower.

Many of you may remember Cole Trower for his antics in harassing Cynthia Dunbar when she was running for RNC National Committeewoman against Suzanne Obenshain in 2016. Others may remember his involvement in a Norfolk altercation that nearly came to blows.  Unfortunately for delegates signed up by the Dunbar campaign, they only know Cole Trower as an intimidating voice on their phones as he spreads lies about Cynthia Dunbar and tries to scare them away from attending the convention.

Cole has been busy calling delegates to the 6th District Convention, including delegates whose forms have been turned in by the Dunbar campaign, even before some of these delegate lists were officially released. He has been introducing himself to delegates as representing different campaigns.  On one call Cole claims to represent the Cline campaign.  On another call it is the Haywood campaign.  On a third call it is the Wright campaign. I suppose we won’t know for certain exactly who is paying Cole for making these calls until the next campaign finance reports come out (if then).

During his calls, Cole tries to scare delegates about how complicated conventions are and how long they will take, telling many to be prepared to stay until after 6:30 PM.  When Cole finds out a delegate is supporting Dunbar he launches into a number of different attacks against her including:

When he isn’t smearing Cynthia to her supporters, he is trying to intimidate them, telling one elderly woman that he knows which church she attends, and telling another supporter that “people who are trying to support her are called to account for her bad activities.”  I guess this is the kind of behavior you can expect from someone with the kind of anger issues Cole Trower apparently has.

Then there is Ginger Burg.  Ginger is the “External Chairperson” for the Amherst County Republican Committee and a staunch Ben Cline supporter.  When the Amherst County Committee Chairman, Vance Wilkins, agreed to abide by the decision of the 6th District to hold their delegate lists so all the units could be released together, Ginger took matters into her own hands. She improperly got a copy of the Amherst delegate list and released it herself.  Ginger has also taken it upon herself to devote her Facebook page to the defamation and slander of Cynthia Dunbar through distasteful memes.  Here is a sampling of her work: 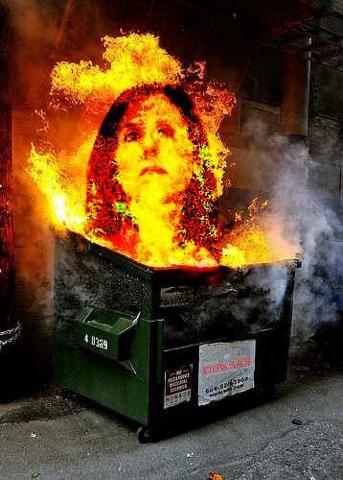 Here’s one where Ginger compares Cynthia to Bigfoot: 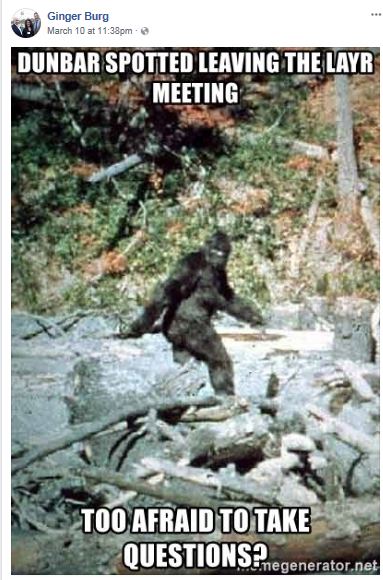 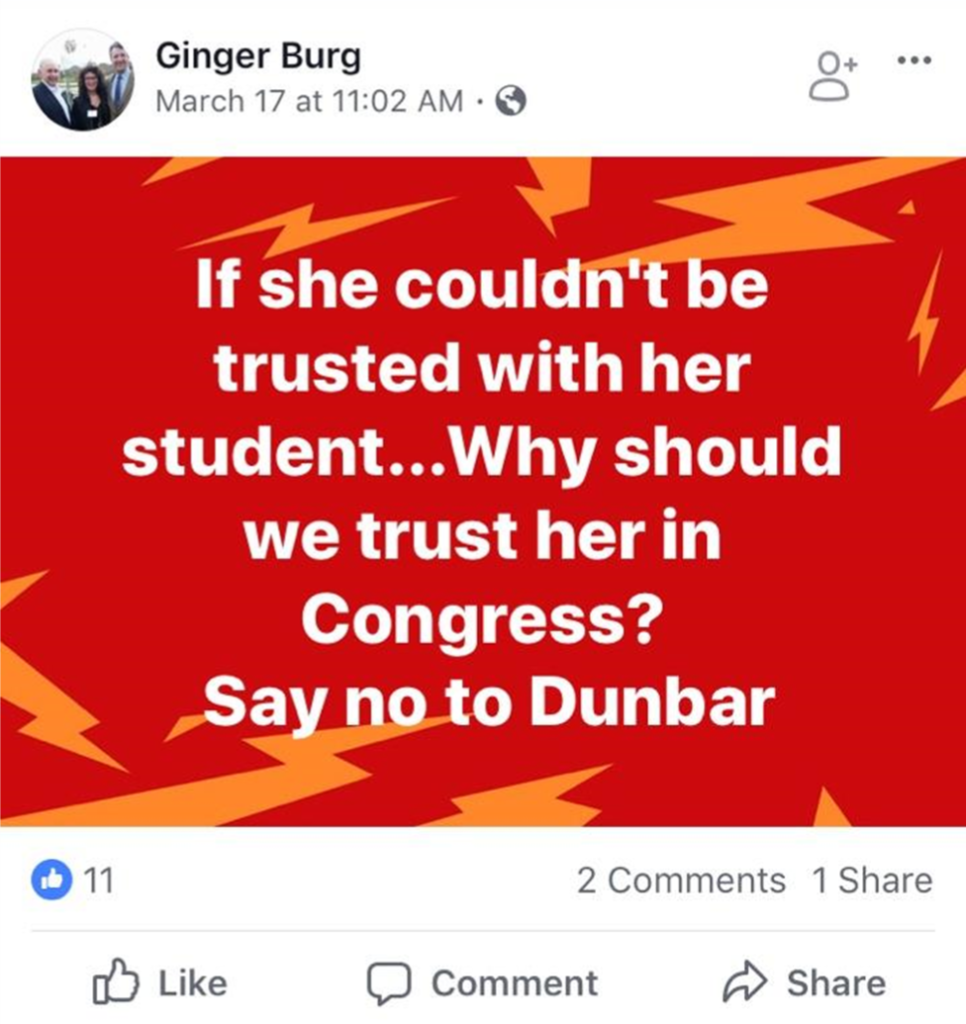 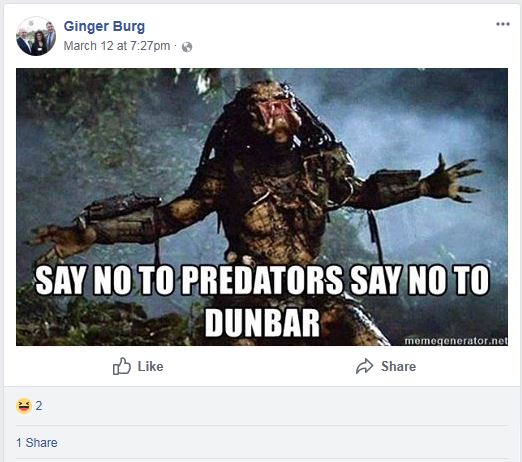 And let’s not forget the one superimposing Cynthia’s face on Pennywise the Clown from the Stephen King movie, “It.” 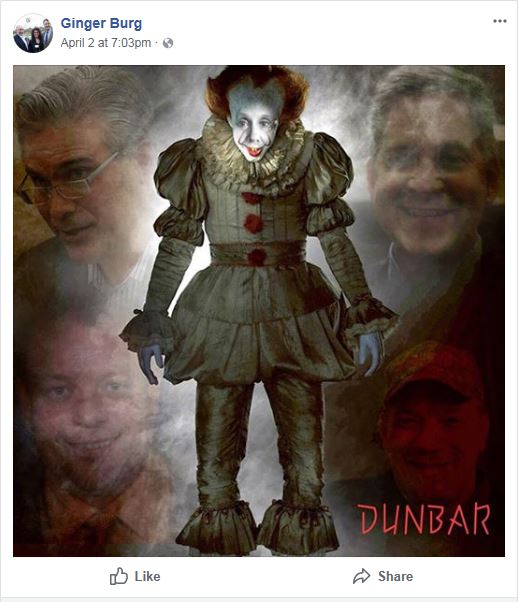 Ginger’s antics are so distasteful that when confronted about them, a staffer for the Cline campaign denied even knowing who Ginger Burg is, but sources inside the Cline campaign say that coordination and encouragement of Ginger’s activity is occurring behind the scenes.

I have worked on a number of campaigns and been the candidate a few times myself, and I can tell you that we would never have condoned the type of behavior that has been going on in attacking Cynthia Dunbar. The crass personal attacks and voter intimidation that has taken place against Cynthia and her delegates is some of the worst examples of negative campaigning I have ever seen. This is a Republican nominating process, and all of the candidates are Republicans. We are supposed to comport ourselves with a level of civility and honor that separates us from the gutter dwelling tactics of the Democrats.

It is unfortunate there are some Republican campaigns that appear to condone this kind of behavior. Unless and until Cynthia’s opponents step forward to publicly denounce these tactics, I suppose it should be assumed that their silence equals consent.

We have an answer in the “Who is paying Cole Trower” contest.  And the winner is…… 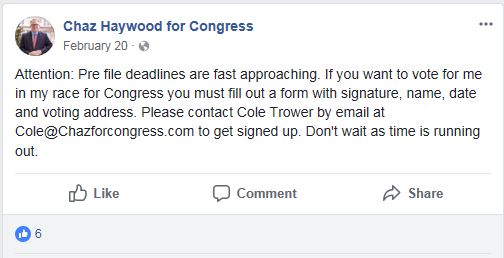 An intrepid reader pointed me to the Haywood for Congress page, where there are a series of posts informing people to contact Cole Trower to get a delegate filing form.