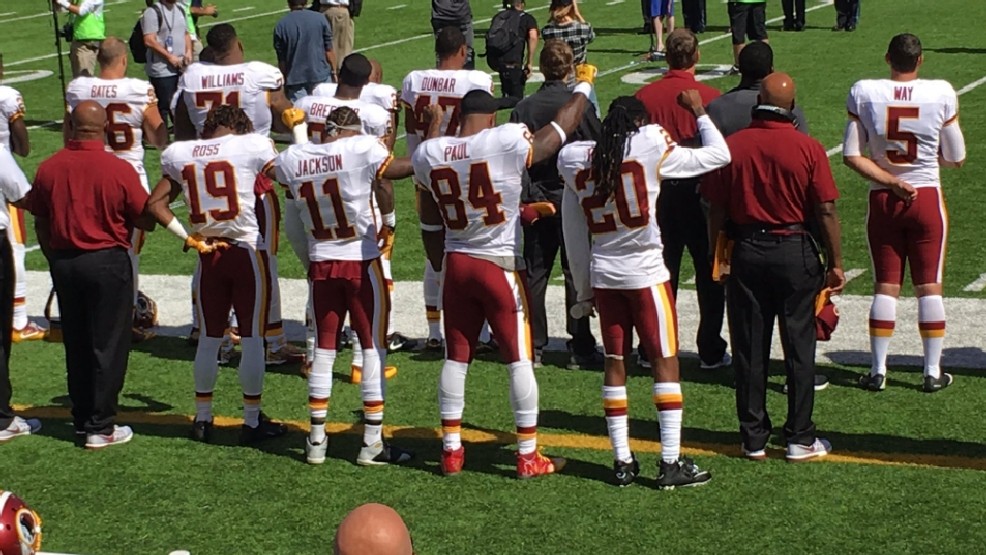 Four big, spoiled, overpaid, brats on the Redskins’ football team held their fists in the air during the National Anthem. Those poorly behaved players were DeSean Jackson, Niles Paul, Greg Toler and Rashad Ross. Paul is one of the five team captains. You can read their inane reasons for their bad behavior here.Â

Meanwhile the owner of the Dallas Cowboys, Jerry Jones, Â has made it clear that his team supports the flag and the National Anthem,

“We strongly, strongly support the flag. In every way, we support, it’s almost ridiculous to be saying it, the people that for generations and generations have given it all up so we can get out here and show off in front of millions of people on television. We respect that so much. That’s the real business. The forum of the NFL and the forum on television is a very significant thing. I’m for it being used in every way we can to support the great, great contributors in our society and that’s people that have supported America, the flag, and there’s no reason not to go all out right there. For anybody to use parts of that visibility to do otherwise is really disappointing.”

No Dallas Cowboy player has disrespected the flag by protesting National Anthem. I wish we could say the same about the Washington Redskins.

This is almost enough to make me rout for the Cowboys! After all the crap with the Redskins name, in which we regular Va. conservatives supported the team and the name, and added to the home team representing this nation’s capital, and added to the fact that the team sucks anyway…you know..If I were Dan Snyder I’d fire their axxxxx!

Dallas had five cops killed by a radical black activist. Dallas Cowboys wanted to honor them with a uniform or helmet patch. The NFL said “no”. The NFL has high demand and limited supply. To stop this situation, the cops have to stop escorting the teams around – blue flu would be a nice touch on game day.

BENCH THE REDSKINS, AND THE NFL

The Redskins fumbled during the National Anthem, and, for me, they are out for the season. Or until those four employees, and the coaches, and the owner, genuinely apologize and promise and deliver civil, respectful, behavior.