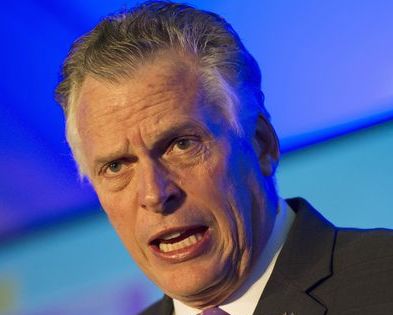 Dancing in the Blood of the Innocent

Yesterday, a murderous monster, a former news reporter, assassinated two innocent people, both part of WDBJ’s morning news team, and put a third person in the hospital with serious injuries.

Our prayers go out to the victims, Alison Parker (reporter), Adam Ward (cameraman), and Vicki Gardner (person being interviewed – currently in the hospital).

And our illustrious governor, long before the facts started rolling in and while the bodies of the dead were still warm, decided to go on a rant about how we need more gun control here in the Old Dominion. And so did MoveOn.org.

So typical of the gun controllers to dance in the blood of the innocent.

McAuliffe used the shooting as an excuse to say that we “need background checks.”

I think he’s talking about Universal Background Checks, but his statement makes it sound like we don’t do any background checks currently, which is, of course, a patently false statement.

From a key part of the murderer’s manifesto, Bryce Williams (whose real name is Vester Lee Flannigan) implied he bought the gun from a dealer and therefore DID pass a background check. ABC News has now confirmed both items with the BATFE. I’m betting the Governor is wishing that he hadn’t brought up background checks in connection with these murders, as once again those background checks failed, just as they have with virtually all the mass shootings in the last ten years.

McAuliffe also used the shooting to remind all of us that he doesn’t have a clue what the gun laws are in Virginia. McAuliffe, once again, said he vetoed a gun bill that would have allowed Virginians to be able to buy machine guns! Uh, Governor, machine guns are already perfectly legal in Virginia and have been for a very long time. Your veto didn’t change that fact one iota.

The sad fact remains that McAuliffe and his radical anti-gun allies appear to revel in the tragic nature of this kind of this crime for no other reason than that it serves their goal of scaring and misinforming the electorate and stirring up anti-gun activists, regardless of the mountains of evidence that guns, in fact, save lives.

The Virginia Citizens Defense League remains committed to countering those who wish to twist an abhorrent crime to serve their own anti-gun prejudices. We will continue in our efforts to better inform and educate the public, the media, and our elected leaders on these important issues.

But for now, we grieve and pray for the victims, and thank the law enforcement community for seeing to it that the perpetrator of this crime was unable to repeat his crazed rampage.

Learn how to join VCDL by clicking here

The author being interviewed by “Bryce Williams” in 2012