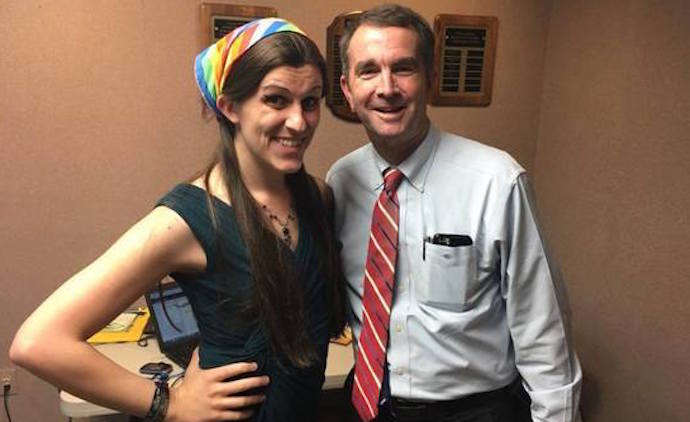 Danica Roem, the transgender Democrat running to unseat Del. Bob Marshall (R-Prince William), claims over and over that she’s not running on the possibility of being the first transgender legislator in the United States.  She claims her run is all about transportation issues, and education, and jobs.

Hogwash.  Roem has made her transition from male to female the centerpiece of a bizarre campaign almost entirely devoid of substance.  It’s almost as if Roem is trolling the entire progressive movement in some sort of performance art act in which sees just how outrageously ill-informed and politically ignorant she can be while still garnering knee-jerk support from Democrats from across the country simply on the basis of a decision to identify with another gender.

Is competence and the right character important for an office holder?  Is an innate understanding of policy and procedure key to the effectiveness of a legislator?  Or is fashionable “victimhood” all that matters?  Roem is the embodiment of the dangerous progressive project to elevate identity politics over literally everything else, regardless of the consequences.  As we can see from the photo above, this infection has spread to the top of the Democrat ticket.

Here’s a video of Dan Roem as front man of a Northern Virginia thrash metal band not so long ago.  If you had any doubts before, they’re surely removed by around the 3 minute mark, where Roem is depicted emerging from a bathroom stall while wiping another man’s genetic material from his lips.

This video was apparently scrubbed from social media, but has been recovered.  It’s no wonder why the paid staff around Roem wouldn’t want this seen, as it shows just how deeply unserious Roem truly is.

This is not the kind of “leadership” Virginia needs in the General Assembly.

Considering Ms. Roem spent nine years as a journalist covering these issues, yes to all. That’s why she won. This column was a total joke.

Exhibitionists like Roem will do whatever it takes to be the center of attention. When thrashing onstage, making suggestive videos and dressing up as a weapon still aren’t enough, the natural reaction is to seek the national, not just the local, spotlight. Even that won’t be enough to bring Roem inner peace. Narcissists always need more and more attention and notoriety. Self-aggrandizement, not governing is the goal.

Definitely not a serious candidate but you’d never know that reading the Post and other liberal media. But a number of people run for these legislative races just to advance themselves — including a number of Republicans I know.

including a certain Leesburg guy I know who post here at TBE and whose name rhymes with Ben Teed?

Oh, if you only knew how much I and others in local office sacrifice in wages, time with the family — not a real career advancement, I can tell you.

Proves you didn’t pay attention to her campaign. She was as serious a candidate as they come in either party.

Wrote a LTE about Danica to the Gainesville/Fauquier Times that was published. The Wash Post refused to acknowledge receipt of my letter because they had a hit piece coming out about Bob Marshall that they did not want the narrative derailed about. Julie Carey from NBC saw my LTE and texted me about it and I sent her the video.

S/he needs mental help, not votes.

why are you so scared of this person?

No one is afraid of him. We feel sorry for him and hope he gets the mental help that he needs.

Does he have, or can he afford health insurance to get help? Besides, Marshall always pulls off another re-election. What is different this time?

If he can afford female hormones, he has insurance. Hormones can be quite costly.

sure looks like she upsets you for some unknown reason – are you afraid you might catch something?

Promoting vulgarity and violence as Danica has in his music is what makes him unsuitable for elected office.

Most musical artists are proud of their work. Not Danica because he took down the disgusting video with the song title,”Thrash Mob” which is listed on his most recent CD released in 2017.

This is real life, not pretend. You cannot put someone with this mentality in charge of big decisions. Sorry, not sorry. Our legislators affect many people.

we put Trump in the WH despite his mentality – sorry, that was too easy,

We put Trump in the WH BECAUSE of his mentality. We got sick of do-nothings and chose the bull in the china shop to bust things up. So far, its working well.

really, and what color is the sky in your world?

So far, Trump has proven to be more of a do-nothing than any previous politician.

Don’t forget when Danica pledged not to take any donations over $500 and as soon as the money started flooding in from out of state, Danica broke that pledge and took over $100,00 from one guy who just cares about the transgendered issue. Danica’s campaign video is all about the pills he takes in the morning to become a woman and shows the makeup routine. Danica has never made this a campaign about issues the people care about. Now Danica says he hopes to get a book deal out of this.

You mean that guy from Wisconsin who has plenty of cash for “Danica”, but can’t seem to pay his back-taxes?

Now we have a possible reason as to why Northam is sporting a big smile in the photo above. Seriously, why are bloggers here and elsewhere constantly referring to Roem as “she”. Roem is no woman, and therefore doesn’t rate the gender pronoun of “she”. Roem is a mentally troubled male who needs professional help, not a position in the General Assembly.

Northam earlier in the week attended a GOTV for Danica at a gay “tiki bar” in Arlington called Freddy’s beach bar.

I lived in PWC when then Dan Roem worked at the Gainesville Times. I was very involved with the fight against Dominion Power. Dan simply interviewed those of us fighting Dominion. Candidate Roem is now making claims that he is the reason that Dominion withdrew their power line application. He lies when it is convenient for him!

Danica is also in training to become a “Dark” yoga instructor which simply means you do yoga to Thrash metal music. None of his very public record and behavior is suitable for elected office. He also can’t keep his lies straight!

suitable for public official – yet you still think Trump is presidential?

Since you believe that Trump is unsuitable because of his lack of decorum, one would think that you would also find Roem unsuitable for the same reason.

It’s not decorum you care about, it’s the R or D after their name. If Roem is elected, it won’t be because of Roem’s policies, because those are nearly non-existent.

Roem is taking a page out of Hillary’s playbook with the singular policy: “Vote For Me ’cause I’m a Woman!”

If being a woman were, by itself, a good reason to vote for someone, Hillary would have won. She didn’t because simply being a woman is not enough. Voters (fortunately) demand more.

If being a woman wasn’t enough, why would Roem believe that pretending to be a woman would work better?

Nonexistent? Did you pay attention to her campaign at all? Del. Roem’s campaign was focused entirely on policies. She focused on traffic and jobs. Bob Marshall was the one who went with a singular policy, which was “Vote for me because my opponent’s a transgender!”

Del. Roem was elected almost entirely because of her policies, because as you said, voters demand more.

What kind of idiot compares our President to a deranged pervert? Oh, I know ANOTHER DERANGED PERVERT … one who voted for Hitlery.