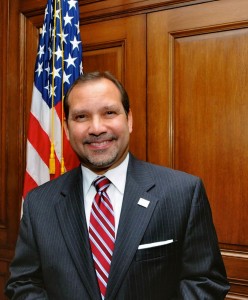 Tom Rust (R-Herndon) has represented the 86th district in the House of Delegates for the last 13 years. Prior to being a Delegate, Rust served as Mayor of Herndon for 20 years. Last month he announced his retirement from the House of Delegates. His district has become increasingly democratic. In 2013 Rust won by a mere 32 votes against democrat Jennifer Boysko.[read_more]

Herndon Hispanic activist Danny Vargas is running as a Republican to replace Tom Rust in the House of Delegates. Jennifer Boysko will also be running again for the seat. Danny is the founder of VARCom Solutions, a marketing and consulting firm. Prior to starting his own company he worked for AOL and RAtheon.  He is also well known for his many community activities, from his website:

He was appointed by the U.S. Congress as a Commissioner on the National Museum of the American Latino Commission and by Governor McDonnell to the Virginia Workforce Council where he chairs the Performance and Accountability Committee; selected National Co-Chair of the HIMSS Latino initiative (advancing Health IT in the Hispanic community); served as Chairman of the Dulles Regional Chamber of Commerce (the first Hispanic to chair a mainstream chamber in the history of Virginia) and currently is on the board of the Fairfax County Chamber of Commerce and on its Executive Committee; was elected National Chairman of the Republican National Hispanic Assembly (a 35-year old nationwide group); serves on the board of directors of Northern Virginia Family Service (a 501(c)(3) focused on empowering families); and he regularly speaks to students at various levels to encourage them to stay in school and work hard to succeed.

Danny has overcome much to become the success that he is today.

Danny Vargas was born in New York City,[2] New York and grew up in Brooklyn, New York. His parents were from Puerto Rico. By the age of two, his parents had divorced, leaving his mother to raise him and his three older sisters as a single parent. His mother was a poorly educated woman who grew up in Arecibo, Puerto Rico in indentured servitude, never finished the first grade and never learned to read or write. Finding herself with no means of support and ill prepared for raising children by herself, the family ended up on welfare. They repeatedly moved from one run-down apartment to another as a result of numerous evictions. Each apartment was basically the same—small, dirty and very messy since his mother was notoriously incapable of maintaining a stable household. With this instability, it is not surprising that he was a very shy youngster and had very few friends.

By the age of 11, his eldest sister had moved out, the middle sister was in a group home, and the sister closest in age was hanging out in the wrong circles.His mother’s alcoholism, sense of futility and desire to find ways to make money, led to a situation in which she would disappear for days at a time, leaving him alone on occasions without food and in dreadful fear. He vividly remembers times when he would melt down ice cubes to bite-size morsels sprinkle them with salt and munch on them so he could have the sensation of eating.[3] He also lives with images of falling asleep in fear and hunger, not knowing when his mother would come home.

To his good fortune, his isolation caused him to be very focused on his academics as an escape. His excellent grades caused him to be selected as valedictorian at his junior high school graduation. He was very responsible and even helped raise his infant niece that was born to the sister closes to him in age. However, as is too often the case, when he reached his sophomore/junior years, he started hanging out with a group of teenagers that were up to no good. He started cutting class and getting in trouble and was almost expelled in his senior year. He was given a chance to enter a special program for kids that were on the edge of expulsion or dropping out and he decided to turn his life around. He graduated not only on time but with honors from the New York City Board of Regents. He decided to join the US Air Force after graduation and scored well enough on entrance exams to choose the career field he would follow.

More on this exciting candidate here, and  here.