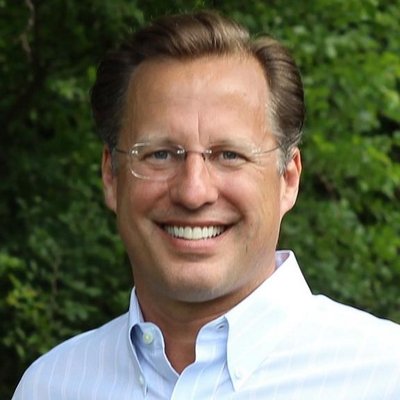 In public, Republican leaders vigorously oppose the executive branch’s highest priority, while in private they leave undisturbed language in a budget bill that lets the executive do what they say they oppose. Conservatives then rally around an effort to close the loophole. Leadership claims the conservatives’ efforts are “unnecessary.” Sound familiar? [read_more]

It should. That’s what happened in Virginia this June, when legislators were under pressure to avoid a government shutdown and simply pass the so-called “clean” budget without taking up a Medicaid expansion bill. The only problem, of course, was that the “clean” budget wasn’t so clean. In fact, it included language Democrats had been planning on using to allow Governor McAuliffe to expand Medicaid on his own without any need for additional legislation:

Republicans moved ahead to capi­tal­ize on their coup [of flipping the Senate with Phil Puckett’s resignation], claiming control of the Senate that Monday and calling it back into session to approve a “clean,” Medicaid-free budget that Thursday.

Still, McAuliffe’s stealthy Medicaid strategy remained on track, with the budget language tucked inside the hefty bill. The plan was so tightly under wraps that some Democrats who had vowed not to back a budget without expansion were threatening to vote against it.

So had conservative Bull Elephant blogger Steve Albertson, spotting the language and warning that it was a loophole McAuliffe might try to exploit.

“If conservatives in the Senate vote for the House budget without fixing this backdoor — for the governor — then they will be held responsible for allowing Terry McAuliffe to get away with expansion,” he wrote Tuesday, June 10, concluding with, “We’re watching.”

By Tuesday night, it was clear that the tea party could do more than watch. In a stunning upset, then-House Majority Leader Eric Cantor (R-Va.) lost a primary to an underfunded tea-party-backed rival, Dave Brat.

When they returned to Richmond two days later, rank-and-file Republicans refused to pass the spending plan with the worrisome language.

Had Puckett been there to vote, the budget would have passed the Senate. Whether McAuliffe’s scheme would have emerged from the House is less clear. Conservative delegates were alarmed by the language, but they risked saddling the GOP with all the blame for a possible government shutdown if they rejected the budget.

Shortly before midnight Thursday [nb: after six hours of intraparty Republican wrangling], a truly “clean” budget cleared the General Assembly and was on its way to the governor. And McAuliffe called Puckett to declare, “Medicaid is done.”

The grassroots movement to convince rank-and-file Republicans to remove the key language—inserted as part of the 2013 deal to secure Democrat votes for GOP leadership’s tax and transportation plan—was championed by Sen. Dick Black (R-Loudoun), hence the hashtag #BLACKorBUST.

Dave Brat, who won his stunning primary victory over Eric Cantor the same day we wrote about the “so-called ‘clean’ budget,” has now taken that same approach to the immigration debate in Washington, DC. When President Obama announced his intent to unilaterally grant amnesty to millions of illegal immigrants, House Speaker John Boehner made a lot of loud noises about how much he opposed that, and even threatened lawsuits against the president. Now, with the specter of a government shutdown, he’s urging Republicans to ignore conservatives who complain of the backdoor to executive action on amnesty that is contained in the current spending bill.

Dave Brat knows better, and together with Reps. Matt Salmon (R-AZ) and Mick Mulvaney (R-SC) he is pushing an amendment to that bill that would affirmatively close the loophole the president is counting on:

Election results in November that emboldened the House Republican majority and delivered the U.S. Senate majority to the GOP be damned, House Speaker John Boehner is desperately turning to the Democrats to pass his omnibus bill that enables President Barack Obama’s executive amnesty.
…
Boehner will need to lean extra heavily on Pelosi and Hoyer for a bailout, however, as conservatives aren’t relenting. Rep. Dave Brat (R-VA), who was just elected to the House after beating now former House Majority Leader Eric Cantor in a primary, is leading a last-ditch effort to stop amnesty via the omnibus. He’s pushing an amendment with support from several House conservatives that would be added to the bill before it hits the floor—unless House Rules Committee chairman Rep. Pete Sessions (R-TX) blocks the amendment, something that would surely spark substantial grassroots outrage against him in his conservative Texas district.

Kudos to Dave Brat for leading on this important issue! Regardless of how one feels about immigration amnesty (or Medicaid expansion, for that matter), it is important that these kinds of issues are debated in an open and transparent way, not tucked into larger bills that few legislators have read, much less understand. This is an important move not just for securing our borders, but for good governance.

According to Brat’s office, 53 House colleagues have joined as co-sponsors of his amendment. We applaud Reps. Rob Wittman (R-VA1), Morgan Griffith (R-VA9), and Randy Forbes (R-VA4) for joining Brat as co-sponsors! Hurt is apparently supporting as well. No word yet on why Scott Rigell, Frank Wolf, and Bob Goodlatte may be sitting this one out, but if you feel strongly that they should join the rest of the Virginia Republican delegation, call their offices and urge them to vote for the Brat Amendment!

UPDATE: Brat’s amendment failed in the Republican-run Rules Committee. Then came the news today, encapsulated well in this excellent but depressing analysis by Ken Cuccinelli: 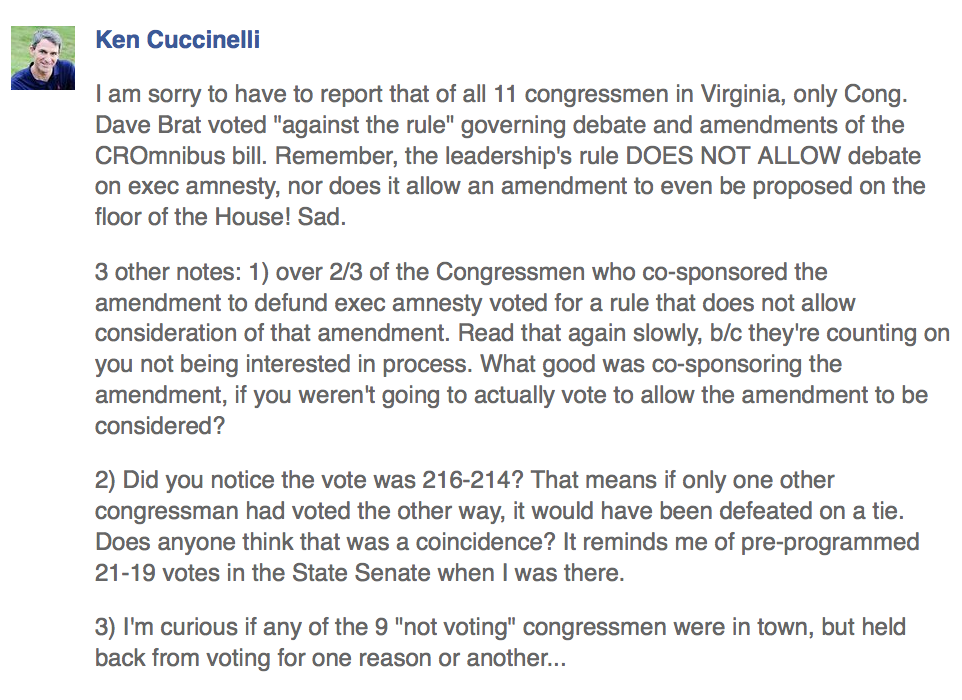