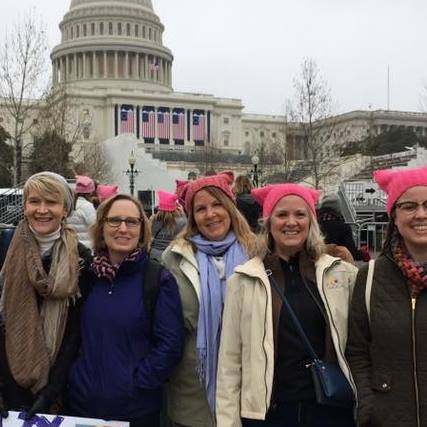 Delegate Wendy Gooditis, in the middle with purple scarf

From the Winchester Star:

Typically, there wouldn’t need to be any follow-up to this type of summary, but not so given remarks from my colleague Del. Wendy Gooditis. While I admired Del. Kathy Tran for her boldness and honesty when she defended her bill which expanded access to late-term abortion, Del. Gooditis’ remarks in the article do not communicate the same intellectual honesty.

I accurately stated, House Bill 2491, “an extreme measure to expand access to late-term abortion, even up to the moment of birth, for almost any reason,” was defeated by House Republicans. “[It] would have eliminated all meaningful restrictions on abortion.”

Del. Gooditis completely mischaracterized the Tran-Gooditis bill saying Republicans “misled and greatly upset” people by foregoing the background and context” of the bill, including the fact that federal law remains unchanged and the underlying law of Virginia would have remained unchanged by this bill, which sought only to support the doctors who must try, in desperate emergencies, to save as many lives as they can.”

Saying a bill will not change the law, really? That is what bills do, Del. Gooditis — and yes, state laws do not change federal laws. But that really has nothing to do with the Tran-Gooditis Birthday Abortion Bill, the infamous House Bill 2491, so I’ll label that a smokescreen.

There is no defending an abortion that occurs moments or seconds before birth, so blaming “Republicans” for the public reaction to the failed initiative is far-fetched at best.

Setting the record straight, in the words of Dr. Donna Harrison, executive director for the American Association of Pro-Life Obstetricians and Gynecologists, “There is never a medical reason to intentionally destroy an unborn child in the third trimester to save a woman’s life. Any obstetrician can deliver a woman safely and quickly by C-section and maximize the chances that the baby will be born alive.

Consider this, while it is difficult to find reliable statistics, some sources estimate that there are about 2 million couples currently waiting to adopt in the United States — which means there are as many as 36 waiting families for every one child who is placed for adoption.

At the October 19, 2016, presidential debate, Hillary Clinton defended abortion in the third trimester. She claimed, as Del. Gooditis claims, that abortions at these late stages are necessary to save the lives of women. But former abortionist Dr. Anthony Levatino has testified that abortions never have to be committed to save a woman’s life. Dr. Levatino committed more than 1,200 abortions before his pro-life conversion.

I doubt I will ever understand how or why people who in one breath would say they love their own child and then advocate for laws that allow the taking of an innocent life even when doing so actually increases the risk to the mother’s life and health and increases the likelihood of failed pregnancy and premature birth in her future.