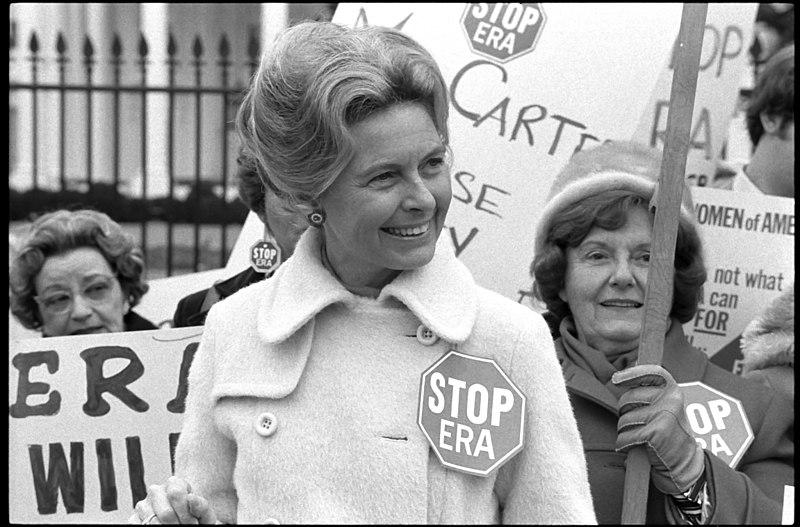 Phyllis Schlafly opposing the ERA in 1977

VIRGINIA’S Democrat state legislators, and some Republicans, believe in the resurrection of the dead 1972 Equal Rights Amendment [ERA]. It provided that “Equality of rights under law shall not be denied or abridged … on account of sex.”

Congress initially gave the states a seven-year deadline, until March 22, 1979, to approve it. However, after a year of quick ratifications by 30 states, legislators learned that the ERA was not just about equal pay or “putting women into the Constitution.”

Rather, it was about expanding abortion and its funding, drafting women into the military—including front line ground combat, ending tax exemptions for churches with male-only clergy or single-sex schools, making young women pay much higher auto insurance rates, and eliminating private spaces for women in dorms, prisons, hospital rooms and more.

In 1978, the ERA needed three more states to reach the 38 required for ratification. Congress agreed with ERA leaders and extended the deadline before the 1979 deadline expired. Even pro-ERA publications opposed its extension, as seen by these editorial comments inserted into the congressional hearing record:

Chicago Sun Times: “… we don’t want an extension of that 1979 deadline. If the cause is equality, the supporters should not ask for special—that is, unequal consideration.” [5-21-78]

The New Republic: “We support the ERA, but we doubt this is the way to achieve it. …An extension could be the … time limit that ends up killing the ERA; if it fails to be ratified …the amendment will be dead.” [7-29-78]

Here’s also an exchange between two Democrats from the 1978 House Judiciary Committee:

Rep. Harold Volkmer, D–Missouri: “… In the event we did not extend by March 22, 1979, do you have an opinion as to whether Congress could open it up again for ratification?”

Rep. Barbara Jordan, D–Texas: “ … Congressman Volkmer, the time will have expired for that resolution, and I do not feel that would be a viable issue for consideration by the Congress because the resolution would, for all intents and purposes, be dead.”

Volkmer, a supporter of the 1972 ERA, later voted against the three-year and three-month extension because it was done on a majority vote instead of a two-thirds vote in the House.

Lawrence Tribe, attorney for the National Organization for Women (NOW), told a Senate committee in August 1978 that if the ERA ratification time limit expired before “Congress took action to extend that limit or before the 38th state took action purportedly ratifying the ERA, it would be arguable that the amendment should be regarded as incapable of such belated resurrection.”

President Jimmy Carter’s Justice Department supported the extension, but also noted in an Oct. 31, 1977, memo from DOJ to the White House that if the ratification deadline expired before Congress extended it, the ERA must start over. “In Dillon … the Court stated: ‘Of the power of Congress … to fix a definite period for the ratification we entertain no doubt’ …,” the memo stated.

Certainly, if a time limit has expired before an intervening Congress has taken action to extend that limit, a strong argument could be made that the only constitutional means of reviving a proposed amendment would be to propose the amendment anew by two-thirds vote of each House … ,” it continued.

“The debate in the Senate also indicated…that failure of ratiﬁcation by three-fourths of the States within the ﬁxed time period would most probably require the resubmission of the amendment by a future Congress,” the DOJ memo stated.

In October 1978, Congress extended the ERA deadline 39 months. In Idaho vs. Freeman (1981) a federal district court ruled against the extension: “Congress may … set a reasonable time limit for the states to act … When this time is set … it cannot be changed by Congress ….”

On February 2, 1994, our own Virginia Attorney General at the time, Jim Gilmore, wrote to me: “Because the Equal Rights Amendment was not ratified within either the original or the extended time limit established by Congress for its ratification, it is no longer before the states for ratification, and any action by the General Assembly to ratify it now would be a nullity.”

In July 1982, U.S. Solicitor General Lawrence Wallace noted: “The Amendment has failed of adoption … the Administrator … will not certify to Congress that the Amendment has been adopted.”

Five states rescinded their ERA ratifications before the 1979 deadline, and 24 of the 35 ratifying states approved the ERA with language expressly including the seven-year time limit.

Last year, an ERA “ratification” measure was before Del. Mark Cole, who chairs the Privileges and Elections Committee. He declined to consider the dead ERA. Militant feminists objected loudly.

But Chairman Cole should do likewise in 2019. That is the only proper—and constitutional—action he can take.