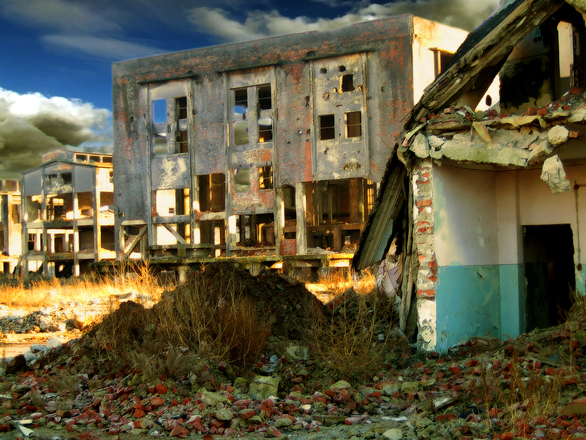 Death Comes for the Party

Donald Trump’s electoral rampage through the Northeastern states and then his stunning Indiana victory – taking all but five counties statewide and walking away with 57 delegates – did a lot more than drive Ted Cruz and John Kasich out of the race.

It has driven a stake in the heart of the post-1988 Republican Party. It’s dead.

The “professional” party has been in death throes for years, for a variety of reasons, but none as lethal as the absence of a defining and unifying rationale for its existence that resonated with its own membership.

What does the Party stand for? And who decides that?

No sooner had The Donald driven his rivals from the field of battle, than the self-appointed guardians of “conservatism,” already in panic mode, began pouring out opinions, curses, and threats – all somewhat hysterically.

If only they could find the same passion about the most destructive force America has ever known; Barack Obama.

Columnists George Will and Charles Krauthammer launched scathing articles explaining their “never Trump” positions as the last defense of “conservatism,” joined by the house pets in the big newspapers. They’ve been followed by others trash-talking Trump and talking about “real conservatives,” and what they should or shouldn’t do. These include conservative media outlets such as Red State, National Review and Conservative Review.

The Weekly Standard’s William Kristol is evidently the self-appointed leader of an effort to mount a third party challenge to Trump intoning the name of Sen. Ben Sasse of Nebraska as its possible standard bearer, who for his part has also said he can’t support the Party nominee because he has to save “conservatism.”

The Bushes have let it be known that they aren’t endorsing anyone. Ditto the Koch brothers. Romney, who famously claimed to be “seriously conservative,” won’t be at the convention. After all, what do any of them owe to the Party that supported and defended them with sweat and money?

On Capitol Hill, Speaker of the House Paul Ryan, oblivious to the primary results evidently, said today that “he is not ready to endorse Trump,” adding that, “I think conservatives want to know, does [Trump] share our values and our principles.”

Speaker Ryan had previously laid claim to the speakership for all conservatives and the right to define “conservative,” by rebuking Trump’s call for a temporary ban on Muslim’s entering the country until the U.S. government could properly identify them, this following the San Bernardino terrorist attack. “This is not conservatism,” Ryan thumped. ”What [Trump proposed] is not what this party stands for, and more importantly, it’s not what this country stands for.”

All I can say is, what are these people talking about?

Aren’t these the same people by and large who sat back in the Bush years and supported vastly expanded government spending, and helped turn education over to the federal government? To say nothing of two wars that were not concluded victoriously, but shackled by rules of engagement and petty infighting.

Is any of that conservative?

Aren’t these the same folks who laid down in front of Obama like they were flower petals tossed at a wedding?

When the Supreme Court overturned 5,000 years of tradition weren’t these by and large the same people who told us to suck it up and live with it? Is that conservative?

A lot of them, like Sen. Sasse, talk about the Constitution a lot. That’s nice. Here’s a few questions: Where were they in the last eight years as an American President dared them to impeach him, ignored separation of powers, laws, funded unlawful programs, forced the BATF to run guns and the IRS to harass conservative groups, abandoned four Americans in Benghazi, and gave Iran $150 billion dollars by confirming that the treaty with Iran wasn’t really a treaty at all?

Any of that conservative?

What the “professional” Party has been good at is subjecting their frustrated members out in the real world to lectures claiming that unregulated, wide open immigration is conservative, and that illegal entry into the U.S. should be rewarded with citizenship because it is a conservative value. We’re told that a conservative believes in the “willing worker” model; that any person in the world has a right to come into the U.S. on a visa to compete with any American citizen for any job at any wage.

The professionals have also been good at pushing “free trade” like it was cotton candy at a child’s birthday party. It is now the sacred mantra of being a conservative – “free trade!”

I want free trade; the empirical evidence of the benefits of free trade are well established economic facts. There is no doubt about that.

But the truth is that, starting with NAFTA, we have learned that we have been snookered. These aren’t free trade agreements defined as two or more countries deciding to treat each others products and services reciprocally; instead, it is managed corporate trade. We allow many countries to ship goods into the U.S. with little to no tax, while American goods are subjected to a withering variety of consumption and other taxes hidden in the host economy, currency manipulation, and are hobbled with rules and regulations that no domestic company must comply with. The end result it that millions of jobs and untold wealth have left the U.S. for someone else’s benefit.

Empty factories stand like tombstones to a disappearing self-determination; while several “conservative” prognosticators claim that the towns and the American citizens those factories supported deserve to “die.” Literally.

So, many of us are scratching our heads and asking, “What the hell is “conservative” about uncontrolled immigration and corporate trade pacts?”

Sometimes it take massive pain to bring us – individually or corporately – to the end of our resources and allow us to realistically reevaluate our destination. I believe that is where the larger “conservative” movement is now.

Perhaps, just perhaps, Donald Trump is the spark that will allow the grassroots to bury the dead “professional” Republican Party, and to rebirth a conservative Republican Party that has clear principles that honor our past and make a way for our future.

Death Comes for the Party was last modified: May 5th, 2016 by Michael Giere
99 comments