Mark Warner can run from his record, but he can’t hide it. 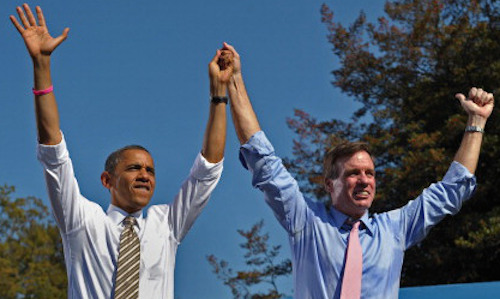 I know…really going out on a limb with this prediction. But it is important that everyone watching the debate on Saturday understand exactly what is going on when Mark Warner tries to change the subject away from his crucial support for Obamacare, and his enablement of the current immigration crisis—where children have been used as pawns to try to hasten the “path to citizenship.”

To date, Warner has done his best to whitewash his record without being too obvious.

First is the embarrassing crabwalk away from his culpability on Obamacare. See here for the Times Dispatch article, “Warner dodges question about whether he’ll campaign with Obama.” Not only did the press take notice when Warner was conspicuously absent when President Obama visited Virginia last week—and the headline dodge—but Warner was unable to offer anything more than a nervous half-excuse for having cast the deciding vote on the President’s signature disaster:

Consequently, the Democrat has not made any joint appearances with the president of late. For example, when Obama made a trip across the Potomac River into Virginia on Tuesday, pushing his plan to fix the Federal Highway Trust Fund in McLean, Warner was a no-show. His spokesman said he was tending to Senate business.

And in a recent interview in Richmond, Warner dodged a question about whether he would welcome Obama to join him on the stump this year.
…
But a key issue in the campaign will be Warner’s support for the landmark measure that has divided the country — the Affordable Care Act.

“This is possibly Mark Warner’s weakest spot, because Republicans will emphasize every chance they get those areas of agreement between him and the president,” Farnsworth said.

Gillespie tirelessly highlights that Warner cast the deciding vote for Obamacare. In contrast, the Republican vows to repeal it entirely. But Warner doesn’t budge.

And then he does budge, saying, “[A]re there things that should be changed in Obamacare? Absolutely,” just before going on to say he’s in favor of insurance reforms, like opening interstate competition, that sound remarkably like the things Republicans were arguing for when Warner cast his deciding vote. Warner obviously wants to try to escape his record. But let’s see him escape this:

(It’s rather telling how the Mark Warner YouTube channel now tries to prohibit embedding of this video, no?)

Norm Leahy has an absolutely spectacular take down of Warner’s penchant for “disappearing” inconvenient content here.

As Norm lays out, Warner removed a video of his last big town hall meeting, where he had this to say about his then-proud support of Obamacare:

Number one, it cannot add to the federal deficit. Number two, we have to start driving the cost of health care down, for all Americans, all across the board. And number three, … change the financial incentives we have in our health care system.”

How’s that workin’ out for us, Sen. Warner?

Judging by how the video of this town hall has been “disappeared” from Warner’s website, not so good.

We can expect more of this kind of obfuscation during the debate (e.g., referring to Gillespie’s musing about the potential for an individual mandate), but Ed won’t let him get away with it. We can’t either.

Second, rather than take responsibility for his support of policies that have led directly to the current crisis on our southern border, Warner will try to make people think that Ed Gillespie agrees with him and doesn’t have any room to criticize. The funny part? The Warner campaign shopped this story line to the Times-Dispatch PolitiFact shop and got smacked down hard.

According to PolitiFact, “Warner’s campaign sent us the statements with a suggestion that his opponent’s position on comprehensive immigration reform has changed,” implying that Gillespie has actually at some point supported citizenship for illegal immigrants. The problem? The record is clear from at least 2006 that while Gillespie understands the practicalities (and political considerations) behind a hardline anti-illegal stance, he has consistently stood against rewarding illegal immigrants with the precious prize of U.S. citizenship.

Whereas Warner and Obama dangle incentives in front children, endangering their lives and the health and safety of those caring for them, as a means of shaming Republicans into support of a pathway to citizenship, Gillespie has been steadfast in opposition to that. Instead, Gillespie believes in balancing the practicalities and moral issues involved with dealing with millions of people here illegally against the potential for encouraging future lawbreaking at our borders.

Expect Warner not to give up on the story he failed to shop to the Times Dispatch. And then expect Ed Gillespie, the immigrant’s son, to destroy him on it.

Warner can run from his record, but he can’t hide it.