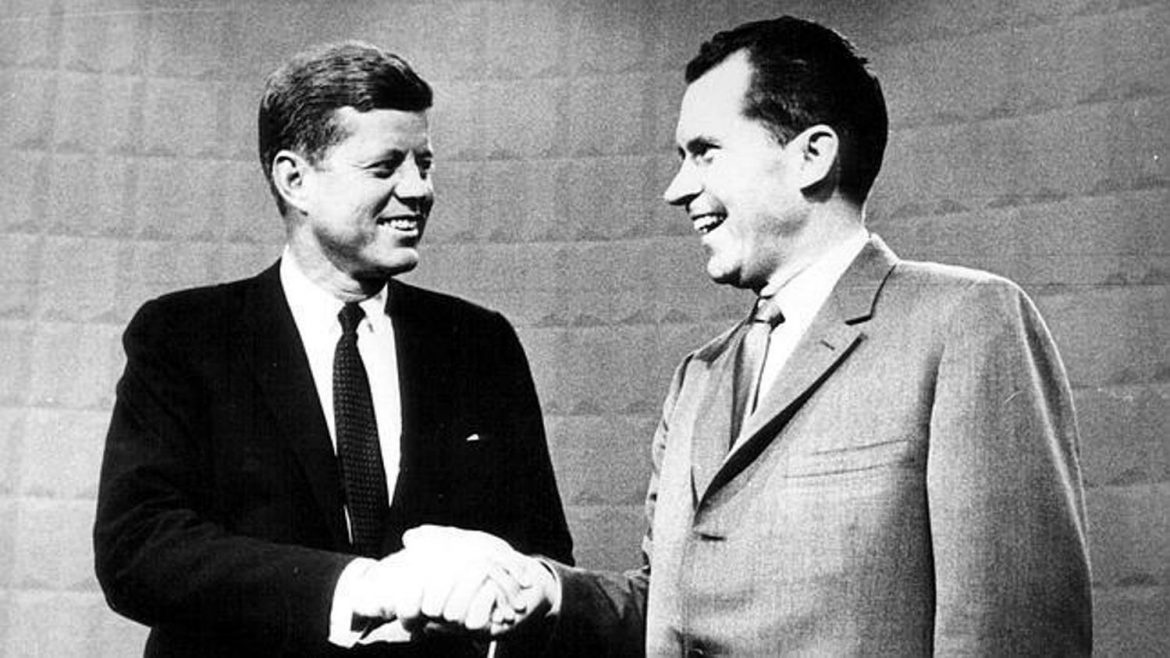 My buddy Al was humming as I entered his coffee shop on the morning after the second (and final) debate between President Trump and Joe Biden. I remarked on Alâ€™s bright mood as I sat down to enjoy my customary volcanic, triple-caffeine, mocha-supremo. Al sat down at the counter and joined me with a cup of his signature Turkish espresso (which has the consistency of hot asphalt).

â€œThe word on the street is that Mr. Trump won the debate last night,â€ Al said. â€œDoes that mean the election is turning his way?â€

â€œWell, it probably depends on which â€˜streetâ€™ youâ€™re on,â€ I replied. â€œOther reports are claiming that Joe whupped the president in the debate and is on his way to a landslide win. â€˜So you pays your money and takes your chances,â€™ as we used to say.â€

I did agree with Al that Mr. Trump scored well by toning down his responses and letting Joe stumble through his answers without continually interrupting him, as in the first debate. I pointed out that media people love the debates because they help to answer the media’s operative question: Whereâ€™s the Conflict?

But this is a new day in political reportage. Many of the Mainstream Media are no longer just acting as reporters, or even umpires, in presidential campaigns. Instead they have become partisans who are constantly on the lookout for situations, events, and statements that might wound the president and help his challenger. Thus, the presidential debates are fields filled with productive opportunities that can be employed to achieve those purposes.

Debates are all about physical manifestations: e.g., words, appearances, expressions and postures. The smallest detail â€“ such as President George H. W. Bush looking at his watch â€“ can be blown up into a debate-destroying mountain by adversarial media. Viewers thought John Kennedy carried the 1960 debate over Richard Nixon because JFKâ€™s Irish good looks outclassed Nixonâ€™s rather sinister-looking five oâ€™clock shadow on black-and-white TV. (Radio-listeners thought Nixon had won.)

Ronald Reagan turned a 1984 debate with Walter Mondale into a laugh-riot when he declared that he wouldnâ€™t make an issue of Mondaleâ€™s â€œobvious youth and inexperience.â€ (Even Mondale cracked up.) Left-leaning media tried hard to trip Reagan up, but his quick wit and actorâ€™s thick skin had them completely outclassed. The Reagan debates only enhanced his genial and witty public image. The media couldnâ€™t touch him.

In 2016, neither candidate on the debate-stage was an incumbent. Mr. Trump was an outsider with no political experience, so he used the debates to describe what he wanted to do, hoped to do and planned to do. Democrat-leaning media criticized Mr. Trumpâ€™s style and demeanor as not sufficiently â€œpresidential,â€ contrasted with Mrs. Clintonâ€™s well-rehearsed â€œstateswomanâ€ presentation.

But The Donald spoke with a businessmanâ€™s conviction about what he believed would move the country forward, while Hillary banked on a three-pronged strategy: (1) selling voters on continuing her predecessorâ€™s policies (which even she knew were not all that popular); (2) painting her opponent as an ignorant baboon; and (3) falling back on the identity-politics of race, gender, tribe, and sexuality which were designed to polarize the electorate, instead of uniting it. In the end, enough voters, in enough states, decided that â€“

The debates were interesting, but were mostly a media sideshow. Reporters and pundits said Mrs. Clinton won every debate. But Mr. Trump carried the day with gigantic public rallies that the adversarial media (unsuccessfully) tried to ignore.

This time around Mr. Trump is an incumbent with a record to defend and expand upon. Itâ€™s a good record, full of solid economic accomplishments, both foreign and domestic. 2020 was a tough year because of the unexpected invasion of the COVID-19 virus, but clear-eyed voters can see that Mr. Trump did his best to guide us through a crisis that no one fully understood and return the country to normalcy.

Domestic violence in numerous cities â€“ initially framed as protests against â€œsystemic police racismâ€ â€“ also roiled the political environment in the latter half of the year. Refusing to take actions which could be miscast as dictatorial excess, Mr. Trump let mayors and governors handle the urban violence which, in many cases, they had encouraged and allowed to continue.

Although he is now an experienced president, Mr. Trump remains an â€œoutsiderâ€ to the bi-partisan political establishment which is accustomed to running things in Washington. His absolutely shocking victory over their â€œanointedâ€ candidate prompted establishment pols of both parties to invent and promote the legend that Mr. Trump had won by â€œcolludingâ€ with Russian agents to steal the election.

Consequently, Mr. Trump had to contend with a two-year Special Counsel investigation which harassed members of his administration, but turned up no evidence that he (or they) had colluded with Russians or any other foreign parties. Then came impeachment by the House of Representatives, followed by acquittal in the Senate, over false charges that he had engaged in a quid pro quo with the president of Ukraine. This distraction occupied the third year of his term. All this opposition â€“ including some within his own party â€“ injured his presidency and limited his ability to carry through on promises he had made to his voters.

Nevertheless, Mr. Trump soldiered on, doing his best to accomplish what he had set out to do â€“ much of which was unreported, misrepresented, or relegated to the back pages by adversarial media. Finally, late in the fourth year of his term, evidence has surfaced which shows how government officials, including the former president and vice-president, used opposition-research paid for by the Clinton campaign â€“ i.e., the Russian Dossier â€“ to hatch a plot that formed the basis for Special Counsel Muellerâ€™s investigation.

A president who can stand up to all this, and actually get something done, is obviously a formidable opponent. Democrats know that, and they realize that their superannuated guy can offer no credible counter to him. So they have kept Mr. Biden hidden in his basement, while pouring millions â€“ some say possibly billions â€“ into a comprehensive national ad-campaign that depicts a younger Joe Biden, and frames the campaign as a battle against Mr. Trumpâ€™s disagreeable personality.

Finally, though, Democrat pooh-bahs had to render tribute to their media-allies by putting Mr. Biden on the debate-stage. In the first debate they dodged a bullet when the proceedings devolved into a two-on-one match, with moderator Chris Wallace acting as Mr. Bidenâ€™s second, and finally degenerated into an interruption contest and shouting match. The debate accomplished nothing for Mr. Trump, but it allowed Mr. Biden to skate through without revealing his diminished capacities or making ruinous policy-gaffes.

Then came the â€œmiracle,â€ which Dems had prayed for (if thatâ€™s even permitted): Mr. Trump came down with the virus. Hallelujah! Maybe he would be disabled for the rest of the campaign. Maybe â€“ oh please, let it be so â€“ heâ€™ll actually die. At any rate, Mr. Biden wouldnâ€™t have to suffer through any more debates. Reporters were doing rhetorical handsprings. What a happy day!

But Mr. Trump didnâ€™t follow the script. After a couple of days in the hospital, he got well. And he came out smokinâ€™. His quick recovery led to the October 22nd debate, which my buddy Al had watched. Striking a calm, statesman-like demeanor and tone, Mr. Trump rehearsed some of his accomplishments, touched on the persecutions and distractions during his term, and promised to revive us and remake the greatest economy in our history. He reminded voters that he had done it before, and assured them that he knew how to do it again. He twitted Mr. Biden about his â€œbasement campaign,â€ noting that the president doesnâ€™t get to stay in the basement, but has to get out there and work for the people.

Sympathetic pundits and reporters had set the bar very low for Mr. Biden. If he managed to stand through the debate without falling apart, it would be called a â€œwinâ€ for him. He did manage to do that. But unfortunately, both his leftist base, and those independent voters still hoping to see a reason to vote Democrat, were looking for something more than Joeâ€™s ability to last through 90 minutes on TV.

Mr. Biden attempted a Clintonian â€œtriangulationâ€ on energy. He tried to reassure folks in oil-producing states like Pennsylvania, Ohio and Kentucky by declaring that he would not ban fracking. But later he told his radical environmentalist base that he would work toward eliminating all use of hydrocarbon fuels by mid-century. If Joe was lucky, each group would hear the promises he wanted them to hear.

Blaming all the COVID-deaths on Mr. Trump, Mr. Biden claimed that he would have done it right, and nobody would have died. He warned that we are about to enter a â€œdark winterâ€ caused by the presidentâ€™s gross mishandling of the pandemic. He intimated that further national lockdowns might be required, and he promised to â€œfollow the scienceâ€ â€“ unlike Mr. Trump.

When a challenger debates a sitting president, all he can do is claim that the incumbent screwed up, but that he would do it right: words against deeds. Sixty years ago, JFK pointed to Ikeâ€™s â€œmissile gapâ€ with the Russkies, and to the recession caused by a four-month steelworkersâ€™ strike. â€œWe can do bettah,â€ said the challenger in his charming Bostonian accent. He was 43 and a war-hero. He had good looks, a charming family and a beautiful wife. He looked and sounded good on TV. Reporters loved the guy. He was the face of the new Democratic Party. Voters thought that was good enough.

Today Democrats are running a tired 77-year-old whoâ€™s lost a step or two. Heâ€™s a 47-year veteran of DC politics: a former senator and vice-president with few positive accomplishments on his record, but who is now backing away from some of them. His campaign is a riot of backpedaling and â€œI never said thatâ€ claims. His VP-candidate is the most radical leftist in the U. S. Senate. And now his son is at the center of a scandal which shows the Biden family receiving millions of dollars from foreign businesses and governments who were buying access to the sitting vice-president.

Joe â€œsurvivedâ€ his debate-appearances, but Doctors say he might not last a full term in office. Then his VP will take over. How much do we know about her and her policies?

Will voters believe that this dicey setup will really help the country? Will they think it will help them? Weâ€™ll soon find out.

Debates and Their Uses was last modified: October 24th, 2020 by Woody Zimmerman