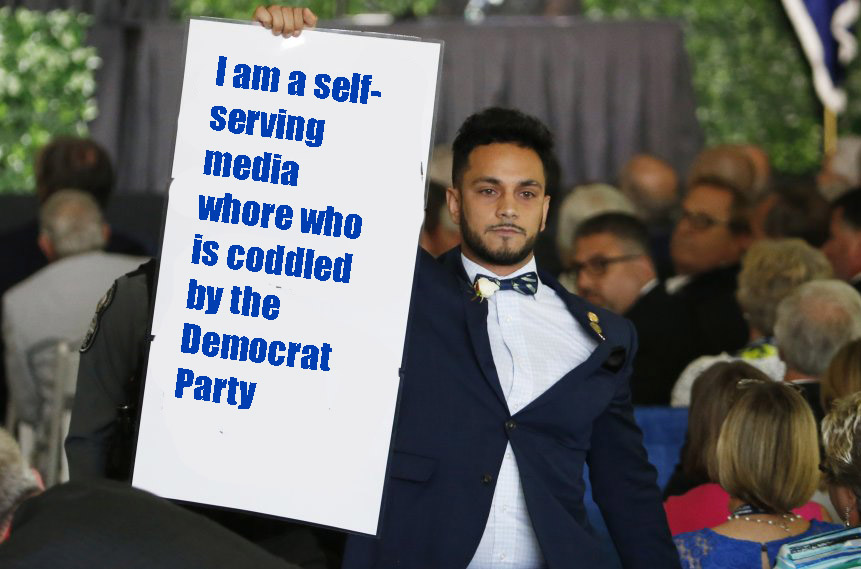 Decorum is dead in Virginia politics

Democratsâ€™ outburst, boycott of Trump speech in Jamestown shows they are unworthy of leading in Richmond or Washington

In October 2008, two fellow Republican activists and I attended Barack Obamaâ€™s rally in Leesburg, where we unfurled McCain-Palin signs to protest.

An attendee tore the signs out of our hands and threw them out.  We left.

However, a week later, I was rebuked by a Democrat activist in a letter to the editor for my actions.  Why just me? Because I was serving in ELECTED OFFICE at the time (Leesburg Town Council) and used passes the Obama campaign gave to the council to gain special access to the rally.

A few of my colleagues on the Council were not happy with me either.  I apologized and never did that again.

I learned that being an officeholder carries with it an â€œexpectationâ€ that we are better than everyone else.

But obviously, freshman Del. Ibraheem Samirah, a Democrat serving a district that comprises Herndon and Sterling in Northern Virginia, knows nothing of decorum at all or the â€œhigher standardâ€ of being in elected office.

At issue, is his outburst July 30 at the 400th anniversary of the founding of Virginiaâ€™s House of Burgesses in Jamestown â€“ the oldest democratic body in the Western Hemisphere â€“ where he interrupted President Trumpâ€™s speech to protest federal immigration policies

In addition to Samirahâ€™s antics, a number of Democratic electeds in Richmond boycotted the event, including Gov. â€œBlackfaceâ€ Northam â€“ such a sterling example of decorum, at least when he was in medical school â€“ and a number of Senate and House Democrat bosses (I dread using the word â€˜leaderâ€™ to describe them).

According to the media, Samirah said he pulled this stunt in part because his Jordanian father was barred from legally entering the country because of his Muslim religion.

â€œI think everybody has a way of protesting,â€ Samirah said. â€œI think thatâ€™s the beauty of democracy; you have a different way of expressing the same voice. We all did not appreciate that President Trump came and bombarded our 400th (anniversary) celebration.â€

Trump was invited by the organizers of this event and is the first president every to address our General Assembly.  This speech and the convening of the House and Senate in the original Jamestown settlement church was a big deal, organized by volunteers who also plan other events this week â€“ including commemoration of the first slaves to arrive in the British colonies.

Samirah, who I believe  is a media whore, is probably stretching the truth about his father in order to give the media a sob story — just as he misled the media about a question TBE writer Catherine Trauernecht, asked him a town hall in the spring and protesters (whom he said had anti-Muslim signs which was a lie)

Republicans in the House of Delegates condemned Samirahâ€™s actions, and House Speaker Kirkland Cox said the outburst violated the rules.  But to date, not a single Democrat in leadership has publicly criticized what he did â€“ just as Democrats in Congress refused to condemn the anti-Semitic remarks of their fellow Dems Rashida Tlab and Ilhan Omar.

Samirah is not only a Muslim and thus protected by the Democratic Partyâ€™s new code of having a different standard for â€œvictim groups,â€ but is running unopposed this fall.  Yes, this is a reliably Democrat district which we failed to win in Januaryâ€™s special election to replace Jennifer Boysko. So, not having an opponent means he can coast to another two years in Richmond and say and do whatever he pleases unless he breaks a law.

Nothing is more dangerous in politics than an elected official without a challenger.

Besides being a â€œResistance:â€ kind of Democrat, he is an anti-Semite, whose comments about Jews and Israel came to light during his special election â€“ which he won overwhelmingly!

Samirahâ€™s actions and the boycott by Northam and Democrat state reps marks a new low in Virginia politics.

A former aide to Gov. Gerald Baliles, Morse wrote in his â€œVirginian Pilotâ€ column that Richmond Democratsâ€™ justification for boycotting Trump is that he â€œis in a different categoryâ€ and is â€œdespicable.â€

Morse adds:  â€œFine. But so were Nixon, Reagan and George II. Democrats couldnâ€™t stand them, either.â€

Morse advised Democrats to attend Trumpâ€™s speech, arguing:  â€œâ€¦Come November, they may have majorities in both houses of the state legislature. Logic suggests that they do things to inspire public confidence, rather than deflate it.â€

But the Democrat boycott of this historic event and Samirahâ€™s protest should give voters pause on whether we bestow majority Democrat rule in Richmond or Washington.

Democrats have clearly become an angry mob, egged on by protesting activist groups, defying Virginiaâ€™s tradition of civility and cleaner than most politics.  This incident just shows how more â€œBlueâ€ this state has become. But Samirah and his ilk will just keep getting re-elected the way things are going at least in Northern Virginia, unless they are challenged in a Democrat primary

While I am unhappy Republicans have no candidate to oppose him in November, I am more incensed Democrats coddle Samirah, Tlaib, Omar and cozy up to charlatan agitators like Al Sharpton.

In contrast, when U.S. Rep. Joe Wilson, a Republican from South Carolina, shouted  â€œYOU LIE!â€ during President Obamaâ€™s first State of the Union address in 2009, he was rebuked by the Democrat-controlled House of Representatives with some Republicans in agreement.  And in my view, rightfully so.

But I doubt Samirah will get rebuked or even apologize, so it will beget more unsavory actions by future electeds â€“ of either party.  And, letâ€™s be real. President Trump has some problems in the decorum category, too, which Republicans should be criticizing.

I hope Republicans will dramatize this incident in the fall elections as an example of what voters can expect in Richmond with Democrat control.

[…] The Virginia media is notorious for failing to ask these questions of Democrat politicians.  I have seen nobody ask Speaker Eileen Filler Corn why she took these members off committees without an investigation FIRST, and why was there no reprimand for Del. Carter, nor the anti-Semite socialist Del. Ibrahim Samirah for interrupting Trumpâ€™s speech in Jamestown in 2019.    […]