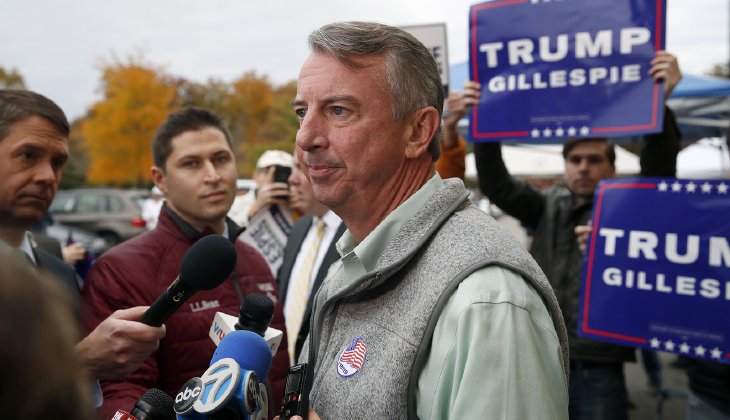 Deep Dive Into the Governor’s Race

It has been one week since Virginia Republicans faced the electoral apocalypse, and the recriminations and accusations about whose fault this disaster belongs to have run the gamut. So far the only excuse I haven’t heard yet is little green men brainwashing voters, but basically everyone is trying to shape the narrative of this election loss to fit their desired course of future action, regardless of the facts. This is a dangerous course to take. It is imperative we learn the lesson of this election loss, but we must learn the CORRECT lesson, or we will chart the wrong course for the future.

I have attempted to do a deep dive into the numbers from the 2017 election to try and provide more clarity to what happened and why, and to debunk some theories. There are three common themes of what happened that have emerged. We will start with the most popular one first.

Gillespie didn’t embrace Trump, and depressed the base

If there was any truth to the idea that Gillespie depressed the base it would have been seen in decreased support in the rural Republican stronghold areas in the southern and western portions of the state. When you compare the numbers, however, you find exactly the opposite result.

In 46 cities and counties in the southern and western portion of the state, Ed Gillespie won larger margins of victory in 41 of them, including flipping Nelson County and the City of Covington from Democrat wins to Republican wins.  Overall, this region saw an increase of 50,000 votes for the Republican candidate, even though overall voter registration in these 46 cities and counties stayed flat (902,000 registered voters in 2013, 901,000 registered voters in 2017).

I believe it is also a fair question to ask the proponents of this theory that if the reason Ed Gillespie lost was because he did not embrace the President, how did Ed defeat Corey Stewart in the primaries, when Corey was a full-throated supporter of President Trump?

We can also debunk some of the minor excuses for this loss:

From 2013 to 2017 the number of registered voters in Virginia increased from 5,250,029 to 5,485,015, an increase of 234,985 (4.9%). An increase in registered voters of less than 5% over 4 years is not exactly a population explosion, and unless nearly every single new registered voter in that time frame was a felon who had their voting rights restored, I think we can safely rule out that theory for the loss.

In 2013, exit polls showed the voting populace looking like this:

While the 2017 exit polls show a voting populace that looked like this:

While there was a drop in the percentage of White voters, Black voters stayed the same, Latino voters increased from 4% to 6%, and Asian voters went from 1% to 3%.  In addition, Gillespie won a higher percentage of Black voters than Cuccinelli, and Gillespie won a higher percentage of Latino voters than Trump did in 2016.  There is just not enough of a demographic swing to account for the wild increase in turnout and support for Northam, especially considering Gillespie’s improved performance among minorities over Cuccinelli.

So if the answer isn’t a depressed Republican base, and it’s not a population explosion, and it’s not an increased minority population or felons voting, what could explain the dramatic increase in support for Ralph Northam and the entire Democrat ticket?

The answer simple.  More Democrats showed up to vote.

Ralph Northam’s performance last Tuesday was a mixed bag of results.  He did far better than McAuliffe in terms of raw votes, but his results across the state were uneven, showing a marginalization of Democrat support in some areas.  McAuliffe got 1,069,789 votes while Northam received 1,405,177 votes, an enormous 31% increase (335,000). However, Northam’s support was not seen as a statewide trend.  Northam had tepid increases of 1 to 15% in 37 localities, while a full 21 localities saw his vote total decline from what McAuliffe received in 2013.

In addition, there were another 24 incorporated cities in VA, including college towns like Harrisonburg, Charlottesville, Radford, Lynchburg, etc.. which saw an increase in Democrat support of at least 20%.  These cities gave Northam another 49,476 more votes than McAuliffe.  Added together, this accounts for over 267,000 (80%) of the 335,000 vote increase Northam received over McAuliffe.

This wasn’t a normal turnout either. It was a motivated, energized turnout of Democrats.  For the first time in over 20 years, Arlington, Alexandria, Charlottesville, and Fairfax County saw a turnout of over 50% in a Governor’s race, with tremendous increases in turnout even when there was not a large increase in registered voters:

Democrats also saw a dramatic increase in their vote percentage in relation to registered voters.  For example, in the chart below it shows that in 2013, 30% of all registered voters in Arlington County came out to vote for a Democrat.  In 2017, however, 42% of all registered voters came out to vote for a Democrat. The Democrats set modern day records in Arlington, Alexandria, Charlottesville, Fairfax County, the City of Richmond, Loudoun, Prince William, Virginia Beach, Chesterfield, and Henrico.

This is also backed up by the previously referred to exit polling data.  In 2013, the ideological makeup of the voting population was 37% Democrat, 32% Republican, and 31% Independent:

In 2017, those numbers had shifted much more in favor of the Democrats:

The ideology of the voters in the 2017 election shifted, as well, to a much more liberal voting bloc.

In short, Democrats were far more fired up to vote, and they came out in droves in Democrat strongholds.  They also came out in larger than normal numbers in the outer suburbs which, coincidentally, is where we lost all of our Republican House of Delegate members.

Why Did It Happen?

Jeanine Martin summed up this question quite succinctly with this post from the other day.  The number one, really the only reason, Democrats were so fired up to vote on Tuesday was so they could stick it to President Trump. Trump’s constant use of Twitter to demean his political opponents, attack Gold Star Wives, and troll just about anyone else that does not show the proper deference to him not only turns off Independent voters, but also enrages Democrats to come out and vote against any and all things Republican, and that’s what happened on Tuesday.

There was just a massive increase of partisan Democrats and mushy Independents that stormed up to the polling booth, grabbed the Democrat sample ballot, and voted for Democrats straight down the line. They didn’t know who they were voting for and they didn’t care.  I honestly believe there were quite a few people who woke up Wednesday morning surprised to find they had replaced Del. Bob Marshall with a dude that likes to wear dresses and call himself a woman.

I really feel sorry for any Republican that was running on Tuesday.  I can only imagine how hard it was for them to knock on the door of an undecided Independent and try to make their campaign pitch for their vote, only to have the President of the United States follow right behind them, give the voter the middle finger and tell them, “I DARE you to vote Democrat!”

For those of you right now preparing your, “what about Obama!” responses, you are absolutely right.  Obama did not bring people together.  Obama divided this country like never before (until Trump).  But you have to remember that Obama cost the Democrat Party over 1,000 down ballot seats in his 8 years in office.  He angered his political opponents, and his party paid the price.  So just because Obama decided to jump off that particular bridge, does it mean we want Trump to do the same?

What To Do About It

The answer to that question is much longer than this already incredibly long post, and it will take a long time to implement.  What we DON’T need to do right now is start calling for people’s scalps.  NOBODY saw this disaster coming.  Republicans, Democrats, pollsters, the media…NOBODY!  Anybody who claims otherwise is a liar.  Ralph Northam turned down an interview request with CNN on Tuesday.  You don’t do that when you think you are going to romp to a historic victory.

We also don’t need to begin the requisite calls for purging this portion or that portion of the people that call themselves Republican. That’s all we seem to do in the Virginia Republican Party these days.  Keep in mind that the definition of insanity is doing the same thing over and over while expecting a different result.

We don’t even need to run away from President Trump or his agenda.  That may sound strange coming from someone who has never been a fan of the orange-hued Liberal Democrat residing in 1600 Pennsylvania Avenue.

The first step in fixing a problem is admitting that you have a problem, and for the Republican Party the immediate problem is Trump’s mouth.  In the short term, what we DO need to do is have someone that he trusts, like Gen. John Kelly, to tell Trump to SHUT…UP!!  I know there are those of you out there that love Trump’s tweets, but there is a reason that most SUCCESSFUL politicians are so boring and non-controversial in public, and it is a simple rule to remember:

Nobody likes a jerk.

The second thing we need to do is work to force both the President AND Congress to advance the agenda the President CAMPAIGNED on, not the one they are currently trying to force on us.  Trump campaigned on a platform of Conservative policies, but all we have been served since he took office is a steaming pile of establishment mush.

There are a lot more ideas I have for what the Party needs to do, but those will have to wait for another day.  For now, we need to recognize that we are currently standing in a very deep hole, and we need to convince each other to stop digging.