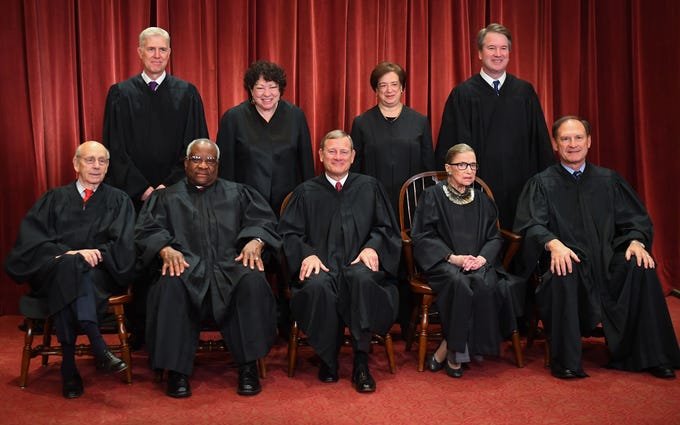 In a 2005 opinion article, “Tyranny of judicial taxation,”former Congressman Bob Barr spoke of the danger which “judicial taxation” represents to our liberty – referring to a recent ruling by the Kansas Supreme Court. As Mr. Barr put it:

“The Kansas Supreme Court has just ruled that the state’s democratically established level of education funding was… constitutionally inadequate, and ordered the legislature to cough up more dough.”

Mr. Barr described the court’s reasoning as flimsy, and he is right that the ruling is intolerable and dangerous. But he might have directed some of his alarm at legislatures which support the charade of judicial “authority” to make such rulings. There is no such authority.

The powers of the three branches of government over each other are clearly spelled out in the Constitution:

The states follow this same model in their constitutions.

In recent years, activist courts have exhibited a tendency to rule beyond their constitutional authority. Political factions often applaud such excursions for their own purposes, knowing that matters thus “enacted” by courts could never be passed by the legislature because they lack popular support. The Kansas Supreme Court “ordering” the legislature to raise taxes is such a case. Had popular support existed for raising Kansas citizens’ taxes, the legislature would have done so ahead of any court ruling. Obviously, though, that support was lacking.

Alexander Hamilton called the courts the “weakest” branch of government. We are puzzled by that description today because the courts seem so powerful. They are rampant on the political field. Just before the second inauguration of George W. Bush an individual sued in Federal District Court to prevent prayer at the Inauguration. The media, the Congress – the whole country, really – held their collective breath to see if the courts would “allow” the customary invocation and benediction during the ceremony. We trembled at the power of the courts to deconstruct yet another cherished tradition of our culture and history.

But this is nonsense. Courts have no authority to “rule” over the Executive branch or the Legislative branch in this way. Even if the court had ruled against prayer, the president need not obey with respect to his own inauguration. This is beyond the courts’ jurisdiction. Political factions – including entire political parties – who applaud court-interventions in such matters are basically playing “let’s pretend” by amplifying court authority beyond its Constitutional limits.

Hamilton was far more correct than our current political culture currently understands or admits. The courts are weak, for they lack enforcement power outside of the judicial system. They have no police, no army – no power of sword or purse. They depend on the good will and cooperation of the other branches to enforce their directives. That compact of American governance worked for a long time. The courts made (mostly) sober, well considered rulings which the other branches enforced. But now the whole “gentlemen’s arrangement” threatens to collapse because the courts have overstepped their role.

During the administration of Donald Trump – whose election shocked and enraged the bi-partisan political establishment – some federal judges have acted as “inspectors general” of the presidency by striking down executive orders which have long been a legitimate part of presidential governance. In addition, judges have countenanced harassment of the president by state and local enforcement-arms. In July 2019 a federal judge “ordered” Mr. Trump’s accountants to turn over eight years of his tax returns to Manhattan prosecutors who are looking for criminal misconduct – despite a sitting president’s immunity from prosecution by any level of law-enforcement. Judicial adventurism has caused a swelling constitutional crisis which must be headed off before our entire system becomes unworkable.

Mr. Bush’s advisors probably breathed a sigh of relief because they didn’t have to defy the court over the inaugural prayer issue. But eventually one branch or the other will have to do that, as the courts continue to spin out of control. A showdown is inevitable. It can only be a matter of time until a state legislature realizes that rulings like the one in Kansas are bogus and should be ignored.

Where is the limit? Suppose a court decides that a state’s prisoners should be released because prison facilities are “unsatisfactory?” If a legislature defies the court, what will the court be able to do? Hold legislators in contempt? Sue? Send the sheriff to arrest them?

Indeed, such a case has already appeared in a dispute over the seating of Virginia Woodward in the Kentucky State Senate. Miss Woodward, a Democrat, lost the 2004 election to Republican Dana Stephenson, but after the election it was revealed that Miss Stephenson – a lifelong Kentucky resident – had lived in Indiana for four of the previous six years, while she attended college there. Thus, she apparently failed Kentucky’s requirement of six consecutive years of residency preceding the election. Jefferson Circuit Judge Barry Willett ruled that only Miss Woodward’s votes should be sent to the election board, making her the ostensible winner.

Despite this ruling, Senate President David Williams refused to seat her, citing the Senate’s sole authority over who should be seated in that body. The court’s ruling was ignored. A long court case ensued on the matter, but Senate President Williams still refused to seat Miss Woodward, declaring that only the Senate can decide who should be seated.

Like most politicians – particularly those who are lawyers – Mr. Barr has been brainwashed by conventional political wisdom into believing in court supremacy. He thinks court overreach can be stopped only by finding judges who will “behave.” But he fails to see that the solution to judicial tyranny is already available.

When courts make silly rulings – e.g., that men must be able to marry men, that citizens may not speak the name of the Christian God, that perversion must be taught to children in the public schools, that men masquerading as women must be allowed to undress in women’s locker rooms, that a legislature must enact a judicially dictated agenda, etc. – the effective response should be Nothing. Legislatures should not act. Executives should not execute. The People should not obey. A thundering silence is all that is needed to defeat acts of judicial overreach.

All branches of government derive “their just powers from the consent of the governed.” The courts’ power to rule outside their defined purview is an illusion because it is unjust. This will finally be realized when a judge tries to jail a school principal for contempt because he permitted a Christmas tree at his school. The people will not countenance such outrages. Their disobedience will break the tyranny of the courts. The only question is when it will happen.

When it does, politicians like Mr. Barr will not lead the way. They are fully vested in the current system and have far too much to lose. Other leaders will have to arise, as they did in 1776. Their first task will be educating the people to show them the limits of the courts’ authority.

When Benjamin Franklin emerged from a session of the Constitutional Convention of 1787, a woman passing by asked him what kind of government they had fashioned. Dr. Franklin replied, “A republic, madam, if you can keep it.” That has been the issue for us, and still is – now, more than ever. Our republic, as Mr. Reagan famously observed, is not a ‘suicide pact.’

The Patriots of 1776 did not create a nation by mindlessly saluting every silly law put forward by the British Crown. Their limit was a tax on tea. What will ours be?