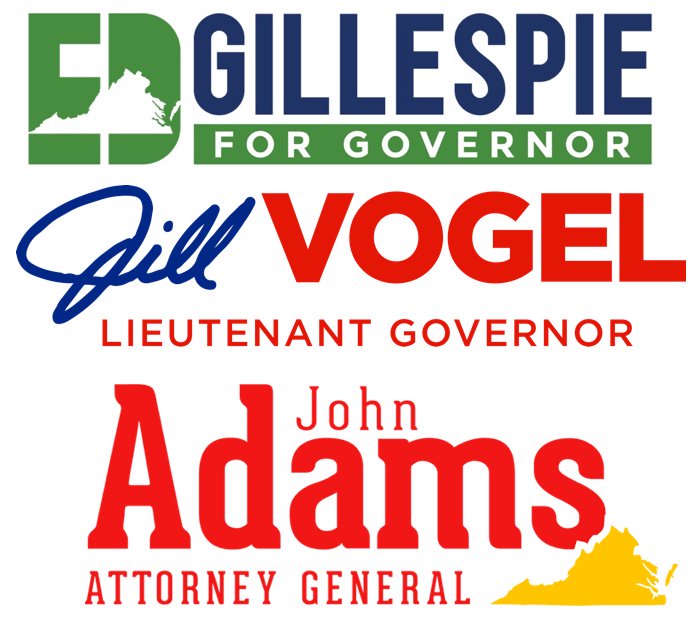 The nomination of Ed Gillespie reflects a Republican Party unwilling to move too far from center. Gillespie has been a long time advocate for the Republican Party, has served as head of the RNC and RPV, and has worked closely with Republican legislators and presidents. Gillespie promises the ability to fundraise competitively and to manage a campaign staff operating at a high level. I do worry that Gillespie represents the Republican Party of the 1990’s and 2000’s, but with minimal effort, I believe he can strike all the right chords with a pro-business electorate dependent on economic growth to fuel higher federal government receipts in a time when technology and regulations are eating away at profits. Gillespie is attacked by the extreme right as being too liberal and is attacked by the extreme left as being extreme right. That places him directly in the center of the Virginia political spectrum with hundreds of thousands of moderate, ex-Democrats, who will likely be turned-off by Northam’s brazen lurch to the left.

The nomination of State Senator Jill Vogel as Lieutenant Governor reflects a socially moderate and fiscally conservative Republican Base. Senator Vogel is well educated in both the Conservative Tradition as well as the law. She understands Virginia politics, and has the skills to be an effective public speaker. Her speech at the State Convention in 2016 was the best speech, in my humble opinion. Vogel will likely do very well with women and moderate to conservative Millennials, two demographics absolutely necessary for a win in November. As Lieutenant Governor, Vogel will not be far removed from her comfort zone in the Senate. Again, like Gillespie, Vogel will not be frightening to moderates looking for a ticket they can get behind.

The nomination of John Adams for Attorney General demonstrates that the liberty-movement in Virginia is alive and well. John Adams will drag social conservatives and constitutionalists to the polls in November, where they are likely to vote for the rest of the ticket (as the hurt feelings and wounds of the primary have finally begun to fade). Adam’s only obstacle is that he was employed by McGuire Woods, a law firm many conservatives believe is an instrument of Satan and shadowy conspiracies. However, as Adams has made his way around the Commonwealth, I think conservatives will vote for the man they see before them, as opposed to voting with the fears and historical paranoia prejudiced against his former employer.

Virginia Republicans desperately need to protect their majority in the House of Delegates. This means that RPV and Republican activists need to focus in on GOTV for their delegates. I think every Republican in the State understands how devastating it would be to lose a majority in either house of the General Assembly. We need to be aggressive and focused, as the Democrats have already shown us their cards: They are going to place President Trump’s face on every Republican running in the Commonwealth. We need to embrace this and fight for every single vote. We have more to lose running away from Trump than we do in tacitly embracing him.

2018 is going to tell us more about the Republican Party in Virginia than 2017. 2017 taught us that we’re pretty divided. Close races between Senators Vogel and Reeves and an even tighter race between the Prince William firebrand Corey Stewart and Ed Gillespie will play out again next year. If Corey Stewart runs, the anti-populist anti-establishmentarians will be forced to join with the establishmentarians in blocking the populist anti-establishmentarians. This has proven to be very difficult for many conservatives, who are far more anti-establishment than they are anti-populist. (I’ll work on correcting this over the coming year). That said, the Republican Establishment in Virginia needs to embrace the anti-populist conservatives – and not with rhetoric and handshakes, but with budges on policy. If not, Corey Stewart could become the face of the Republican Party in 2018 and we’ll all have to live with the consequences of that.

If the pro-primary people select a primary for 2018, then a crowded field will all but ensure Stewart a victory. A convention would all but ensure Stewart’s defeat. If defeating Stewart is an objective in 2018, then we would need to narrow the field down to Stewart and one other candidate. Two candidates proved too close just a couple weeks ago. Stewart will have only gained support between now and then. While Trump’s brand of populism has activated new voters, populism will push the moderates back to the Democrat Party and, as with the general election in 2016, we’ll lose by four or five points. We must have candidates in statewide races that can appeal to both moderates and conservatives. The math supports no other arrangement. The only way to hold back the rising tide of populism is by embracing conservative policies. 2018 will tells us whether or not this lesson was learned.

Black, White, and Woke in America