We’ve all heard stories about leftist “community organizer” groups promoting their causes (and Obamacare) on the taxpayer dime. Now, Del. Bob Marshall does something about it. 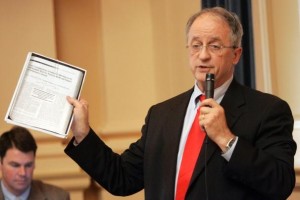 In response to innumerable reports of abuses by unlicensed, unvetted activists with government contracts to sign up Obamacare enrolees–and in absence of meaningful action by Congress or the administration–Del. Bob Marshall has once again stepped up to the plate to protect taxpayers and the integrity of the political process. From an email Marshall sent supporters earlier today:

“We the people” paid $67 million to register democrat voters by Obamacare’s nationwide traveling Obamacare salesmen called “Navigators.” HHS awarded that much tax money to pay over 100 pro-Obama leftist groups in 34 states to sign up enrollees for Obamacare and show how enrollees can register to vote at the same time.

Among the Navigators are Planned Parenthood affiliates, homosexual activist organizations, United Way groups, Area Aging agencies, consumer health groups, Community Action Agencies, Migrant Health and the Virginia Poverty Law Center. http://www.cms.gov/CCIIO/Programs-and-Initiatives/Health-Insurance-Marketplaces/Downloads/navigator-list-10-18-2013.pdf Navigators can be felons, do not have to be bonded, or receive the education and training required of regular insurance agents.

On page 59 (of the 61 page HHS Obamacare application) the applicant is asked, “Would you like to register to vote?” The close proximity of such a voter registration question to the certification of a government subsidy surely must suggest the two are somehow linked.

Navigator Abuses
The US House Oversight Committee conducted a hearing on Navigators (12/6/13). Among other issues, Chairman Darrel Issa noted, “In Dallas, Navigators have been caught on camera advising individuals to commit tax fraud by under reporting income in order to gain higher subsidies.”
…
Obama’s Health Care Vote Buying
Obama and his “progressives” are using tax money to increase their own political power, not just for one election, but for decades. Navigators nationwide will create a class of voters heavily dependent on tax-paid healthcare giveaways. Obama meant it when he said he would change America, and he is doing it with our tax money.

Our tax dollars are subsidizing millions of Obamacare recipients and will create a new constituency motivated to turn out at the polls to vote for liberal democrats. Talking the virtues of a Free Market economy to such voters won’t cut it. Democrat political party bosses in 1890’s New York City Tammany Hall would have loved to have such leverage!

Cautions from Social Security Commissioner
Michael Astrue [HHS general counsel (1989-92) and Social Security Commissioner (2007-13)] recently wrote: “HHS opened the door to large-scale fraud by providing funding for tens of thousands of ‘navigators’ … to persuade the uninsured to apply for coverage … Instead of hiring well-screened, well-trained, and well-supervised workers, HHS decided to build political support for the Affordable Care Act by pouring money into supportive organizations … these navigators are unaccountable, and yet they will be asking people for Social Security numbers and other sensitive information.” [Weekly Standard, 10/21/13]

Citizens need to remember that, “At various points over the past two years, Internal Revenue Service officials singled out for scrutiny not only groups with “tea party” or “patriot” in their names but also nonprofit groups that criticized the government and sought to educate Americans about the U.S. Constitution, according to… the agency’s inspector general. … IRS field office … decided to focus on groups making statements that ‘criticize how the country is being run’ and those that were involved in educating Americans ‘on the Constitution and Bill of Rights.’” [Washington Post, 5/12/13]

It is naive beyond description to think that Barack Obama, the most power-grasping president in American history, would not want to use this opportunity to solidify power for himself and fellow progressives.

Rather than sit by idly and wait for the feds to get their acts together, Del. Marshall has introduced a bill designed to thwart such abuses in Virginia.

Delegate Marshall’s Legislative Response
Because of these and other problems I introduced HB 136 which provides that any Obamacare Navigator or affiliated group must be licensed by the State Corporation Commission and would require completing a training program, passing an exam, and submitting a criminal history. The SCC will not issue or renew a license to a “Navigator” for felony conviction involving fraud, misuse of funds, misuse of information, being required to register with the Sex Offender Registry, or knowingly providing inaccurate information to uninsured persons regarding premium tax credits and cost-sharing reductions.

HB 136 also makes it a Class 1 misdemeanor for a Navigator to provide applicant information to any political party or private group or person for voter registration, to disclose a social security number or any other personal information of any applicant or to encourage or direct an individual to knowingly make any false, fictitious, or fraudulent statements or representations to an exchange or government agency in connection with enrollment for Obamacare.

Kudos to Bob Marshall for standing up for all of us. If you support Del. Marshall’s effort to de-politicize this process, and to protect the taxpayers of Virginia, click here to learn who your legislator is so that you can encourage them to co-sponsor Del. Marshall’s important legislation.

In case anyone needed a reminder as to why Bob Marshall is my favorite Virginia legislator, there it is.