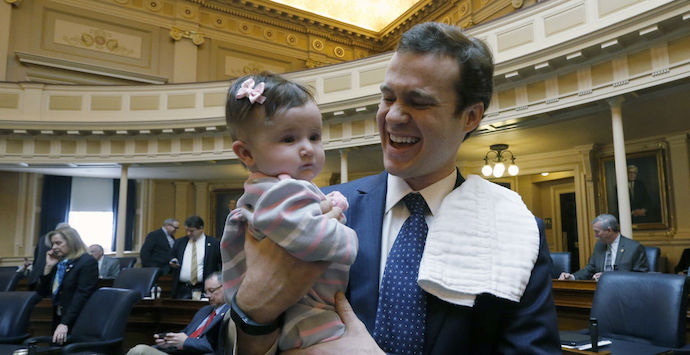 Three term House of Delegates member Peter Farrell announced on Friday he had decided not to go through with his re-election bid.  In a Facebook posting to supporters, Farrell cited the demands of the General Assembly as being incompatible with his young family and growing business. 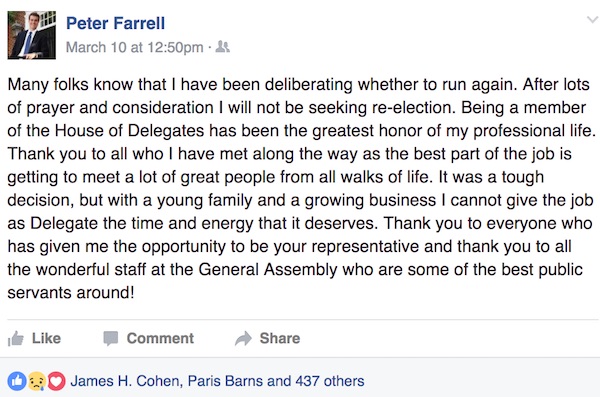 The announcement came as a surprise to most activists in Farrell’s district.  The 56th District includes parts of Goochland, Henrico, and Spotsylvania counties, and all of Louisa County, and is located squarely within Dave Brat’s 7th Congressional District.

The question of who would succeed Farrell in the solidly Republican district arose quickly, with rumors centering around several prominent former candidates and current and former party officials.  Only one candidate has made it official. 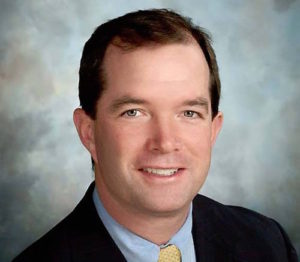 Louisa County GOP Chairman Graven Craig, an attorney and longtime stalwart conservative activist quickly threw his hat in the ring.  Craig, who is a partner in the United Self Defense Law Firm, defends 2nd Amendment rights for a living.  (Among the other partners in this firm are Torrey Williams and former Attorney General Ken Cuccinelli).  Craig has served in numerous elected and appointed capacities within the state, local, and national Republican Party over the last 25 years.  Just two weeks ago, he was appointed by Rep. Dave Brat to a panel to help select the next U.S. Attorney for the Eastern District of Virginia.

Farrell had previously designated a primary as the method of his renomination, pursuant to the provisions of the Incumbent Protection Act.  We’re told that members of the 56th Legislative District Committee are discussing whether, with a somewhat compressed timeline and, they should revisit the question of nomination method.  Those with whom we spoke were uncertain about how this question would turn out.

Craig appears well-suited for either method, with strong backing among grassroots activists, Tea Party members, and the traditional GOP base.  We’ll have to wait and see who else steps forward to run before we’ll have a sense of who would benefit from one method or another.

In either case, the seat will be contested in the General Election for the first time since 2009.  Democrat Lizzie Drucker-Basch has already announced a run for the Democrat nomination, according to VPAP.

March 30 is the deadline for candidates to file if the race remains a primary.  Stay tuned.