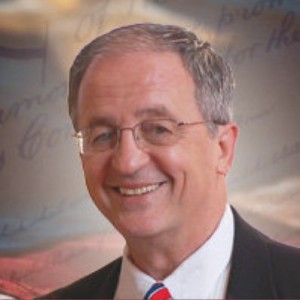 Early this week Delegate Bob Marshall will announce his candidacy for Congress in the 10th district.  Prior to his decision to enter the race Marshall set a goal of finding a volunteer in every precinct to help organize his campaign.  The Bull Elephant has learned that, having met the goal of securing support in every precinct in the 10th District, Marshall has made the decision to run.  During  his many years in the House of delegates, prior to and since redistricting, Bob has represented one-third of the current 10th district so he is very familiar with the people and the issues in the district.

Since first running for office in 1991 Marshall has won thirteen elections—most by very large margins, up to 85%—despite being out spent in every contest.  Marshall is a well-known social and fiscal conservative, always vigorously opposing tax increases.  He is also the author of Virgina’s Marriage Amendment, the Marshall-Newman Amendment, which was ratified by Virginia voters in 2006 with 57% of the vote. For more information about Bob Marshall, read his letter to supporters here.

A big question remains in the 10th: will Senator Dick Black endorse anyone in this Congressional race?  Representing half of the district, Senator Black’s endorsement will be very significant.   All the candidates have been clamoring for his favor, because they know how important his support will be,  but he has not yet endorsed anyone.   Will Bob Marshall’s decision to enter the race make a difference?  Will Dick Black endorse his old friend and fellow conservative Bob Marshall?  When we know, you’ll know!

Delegate Bob Marshall is a Candidate for Congress in Virginia's 10th District was last modified: February 9th, 2014 by Jeanine Martin

[…] anti-gay Virginia GOP Del. Bob Marshall will this week announce his candidacy for the U.S. […]

You can’t argue with the fact that Bob Marshall has been a conservative stalwart on important issues like guns, life, and gay marriage. Very little to find to disagree with him from on that front.

That much said, I think it is a huge mistake for Marshall to run. The 10th district just isn’t a good fit for his confrontational, hard-right style. Unfortunately, the Democrats will have a field day with his written and verbal track record on many issues over the years. They will use his own words and statements to absolutely crucify him in the general with the voters as some kind of right-wing archdemon.

I hate to say it, but there is just no way he can sell himself to enough voters in Fairfax and Loudoun to hold the seat. Marshall would be much better off to wait for Bob Goodlatte to retire, which he likely will soon, and run for that Shenandoah Valley seat. (Who knows, he might even end up facing Rob Wasinger in the primary there, because we know how much Rob likes to run for open seats) Regardless, that district is a much, much better fit for him and I would wholeheartedly support him were he to run there. He’d have a strong chance to win the general election there. He has virtually no chance to win it in the 10th, so if we are smart, we will not have him as our nominee.

We need a candidate that can win, not another hard-right martyr that might make us feel good during the campaign, but ultimately ensure that we get a Democratic congressman who will then dig-in and we will be stuck with them for 20 or more years.

If Bob Marshall is the candidate we can kiss this seat goodbye-there’s absolutely no way he does anything but push the race to an unelectable end of the spectrum. Good Job Bob, thanks for undercutting the party’s momentum on this one.

Marshall is such a head-and-shoulders-above quality candidate that the rest may as well just drop out now. A district would be just plain brain-damaged not to accept the honor of having a man of such integrity and statesmanship represent them.