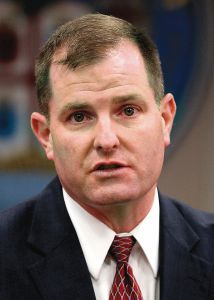 Christopher Collins who until recently was a Supervisor representing the Red Bud District of Frederick County will challenge Mark Berg in June’s Republican Primary.[read_more] Criminal defense attorney Christopher Collins was first elected to the Board of Supervisors to a term beginning January 1, 2010 and re-elected to a term beginning January 1, 2014.  He resigned his Supervisor seat on February 26th and yesterday announced his run for Delegate in the 29th district. Prior to his recent move he lived in the 33rd district, Delegate Dave LaRock’s district. His recent move makes Collins eligible to run for Mark Berg’s seat in the House of Delegates but makes him ineligible to continue serving as Supervisor because he no longer lives in the Red Bud district.

Delegate Mark Berg is one of the strongest and most principled conservatives in the House of Delegates. He is never afraid to go against the leadership to do the right thing for the people. He stands up for the people of Virginia regardless of pressure from the leadership in Richmond which can be considerable.  No one in Richmond understands the perils of Obamacare, and expansion of Medicaid, better than Dr. Berg. It would be terrible for the people of the Commonwealth to lose his voice in the House of Delegates. In a 2013 primary Delegate Berg beat a 22 year incumbent. I have no doubt that he will prevail again this year.

I don’t live in Delegate Berg’s district, but he is a strong conservative voice who never forgot why the people sent him to Richmond in the first place. Having said that, elections have a lot of moving parts and I really hope Del. Berg is as skilled a politician as he is a legislator because we need 10 more just like him in Richmond.

Definitely behind Mark Berg! He has not forgotten why he was elected, to serve the people! He has been invaluable in the General Assembly, has an eye for detail, knows the issues inside and out, and his background and expertise as a Medical Doctor has been a huge help in explaining health policies which come up each session. He is not interested in power, prestige, or putting feathers in his cap, but in public service. He is a statesman, a man of integrity, and there are not many like him in politics or in life. He will need our help to win in 2015!

Go to Delegate Mark Berg and volunteer to help.

Berg’s seat cannot be taken for granted. The establishment hates him and they will fully fund his opponent, possibly raising more money than Mark. Instead of sitting back and declaring “Mark’s going to win” I think we should assume that he’s going to lose and work the grassroots ground game hard for him so that he does win. He has a big target on his back and if the Establishment is ever going to get rid of him, now would be the easiest time, since he’s only been in office one term and is not as well known as multi-term incumbents. Remember that it has been near impossible for them to get rid of Bob Marshall, yet they’ve been trying for years (and have come close before), but Marshall is much more well known than Berg at this point. And Marshall has never taken a race for granted in his life and always campaigns as if he’s the underdog. And Berg’s opponent certainly seems like a formidable one, having won two recent elections himself. Now is not the time to sit back, it’s the time to send money to Berg and hit the ground game.

Dr. Mark Berg is an amazing, intelligent, principled, and humble man. He is one of the great treasures in the Virginia House of Delegates. If the Republican Party were entirely populated with people like him, our nation would be in an immeasurably better position than it is today. Delegate Mark Berg has my support, without any question.