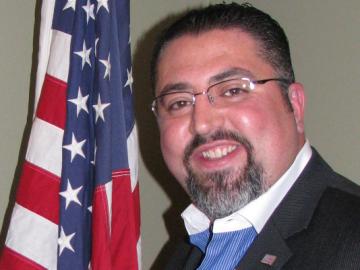 Elected officials should not have social media accounts, they do it wrong. David knows that hasty invective is as inappropriate as a bad joke or a halloween flyer. I’m more offended at the exclusionary diatribe than Mark Levin’s favorite insult. Donald Trump is a nominee in OUR party and, like most on this comment section, have an issue with OUR rules.

“Mark Levin’s favorite insult”? “Get off the phone you big idiot”?

About 5 years ago on New Years Eve afternoon, I saw Mark at Costco. I didn’t recognize him except he was on the phone and as I walked by I recognized his voice. I walked back by him to make sure it was Levin. I was SOOO tempted to say “Get off the phone you big idiot”.

Obviously those who threaten David should be handled by law enforcement.

I am leaning towards Trump. I am well educated,knowledgeable about politics but I hope David only meant those that are making those terrible
threats as moronic Trump supporters.

I know quite a few in the law enforcement community on local,state, and federal level who are supporting Trump. I know folks who our protecting our country from attacks that are also Trump supporters. Those elected officials who disagree with any of the presidential candidates have to be very careful about calling supporters names because they are going to need those same supporters in the general election.

Yes, I expect Trump to be the top vote getter in our primary. We can thank the establishment and SCC for that. They insisted on a primary and will have to live with results, assuming our delegation will be seated at the convention.

Or we can thank the RNC and the fine work they’ve done to our brand. We can thank our ineligible and lackluster nominees for leaving such a candidate vacuum. But you are right, most of all we can thank our Republican SCC for choosing the primary — I’d like to thank them in great personal detail, so I’d like a record of their votes — the primary supporters should be deemed out of their re-election.

(not forgetting our own $250,000 10th District Half-Plus-Jo for their special effort on our own separate Comstock primary.)

I believe that was a roll call vote for a primary so we should be able to get a copy of the vote. The establishment loves them some primaries. Our people in the 10th, not so much.

It’s politics, everyone shoots off their mouth, and in social media, the little man syndrome is the order of the day. David is bathing in the attention and enjoying his time in the spotlight.