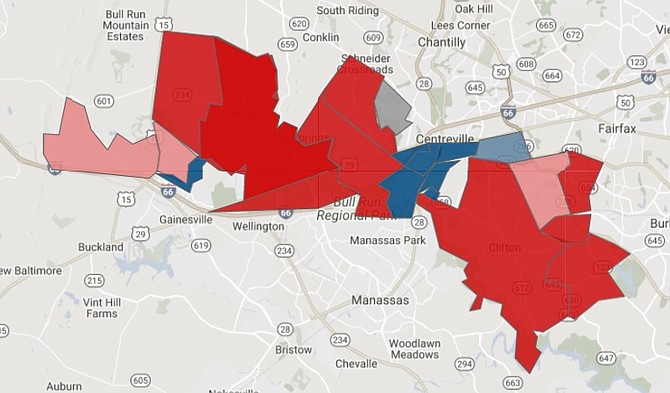 The recount in the 40th House District (Fairfax and Prince William) has been completed, re-electing Republican Delegate Tim Hugo over Democrat Donte Tanner.  In Election Days results Hugo was up by 106.  After the recount Hugo and Tanner each gained one vote in Prince William county precincts.  In Fairfax County, Hugo gained 16 votes and Tanner gained 13 votes. From Insidenova.com,

“We faced unprecedented opposition from numerous outside groups, but our message of service to our community is why we received such bi-partisan support and were ultimately successful,” Hugo wrote in a statement. “I look forward to building on our accomplishments and finding new ways to improve our community.”

WHAT is the REAL story here?

1. FIRST, THAT IS GERRYMANDERED DISTRICT! AND REPUBLICANS DID IT!

Question: Why are Republicans DEMANDING non-partisan drawing districts? This is SO OBVIOUSLY A SHAMELESS GERRYMANDER that Republicans should be ASHAMED that we can all this map so dramatically. Republicans shAt in their pants when they drew that district. and it stinks.

2. SECOND, EVEN IN SUCH A GERRYMANDERED DISTRICT THE DUDE CAN BARELY WIN.

Sorry, but your numbers are incorrect incorrect.

Tanner had a net gain of seven votes.

WOW! Thanks for the clarification. Seven whole votes!