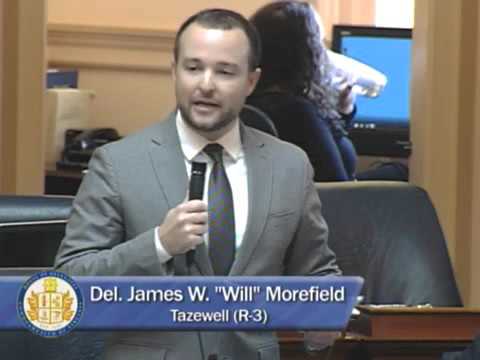 Delegate Will Morefield Runs as a Yes Man

This Saturday, April 29th, Delegate Will Morefield will try to survive a Mass Meeting against community-supported Bob Altizer. Very little has been written about this race and I think I can understand why. Delegate Morefield hasn’t done anything of note since taking office in 2010. Delegate Morefield boasts an impressive list of establishment endorsements from Republican Leadership who, as best I can tell, have absolutely no reason not to love Morefield’s obsequious presence as a Yes vote for whatever leadership asks for.

In speaking with folks in Delegate Morefield’s district, I was a little bit surprised that hardly any of them knew who he was. After a looking into this race, I’m now willing to bet that there are more than a handful of delegates in the General Assembly who don’t know who Mr. Morefield is or what he stands for. Over the past 4 General Assembly sessions, Delegate Morefield has missed an average of just shy of 9 days per session, for a total of 34.5 days out of 210.  That comes out to a staggering 16% of all of his days in session over the past four years.

But that’s O.K., because it probably doesn’t require a great deal of effort to pick up the phone and, “Speaker Howell, how are you? You’d like me to vote Yea on 1634? Of course. What’s it about? Yes, sir. I was kidding. I don’t need to know.” Easy Peasy!

Mark Lloyd, one of Trump’s top lieutenants in Virginia explained, “I don’t remember getting any help from Delegate Morefield during the campaign, and neither do the volunteers I’ve spoken to.” I’m in no position to throw stones in a glass house, but I’m not running for office in Coal Country. Delegate Morefield is.

I remember when my son was born. My wife called me at work that night. I left someone in charge, drove to the hospital and got there just in time to see him born. Then it was right back to work. I stopped by for a couple of hours the next day. Then I drove to the base and got on a bus. By the time they were released from the hospital, I was halfway to Desert Storm.

I’ve been making up for it ever since. Guess I should have been a politician.

What a terrible piece.

If you’re going to call him a ‘yes man’, and go further by titling your piece as such, at least back up the claim. Otherwise, as you’ve done here, it’s just lazy name-calling with no substance to back it.